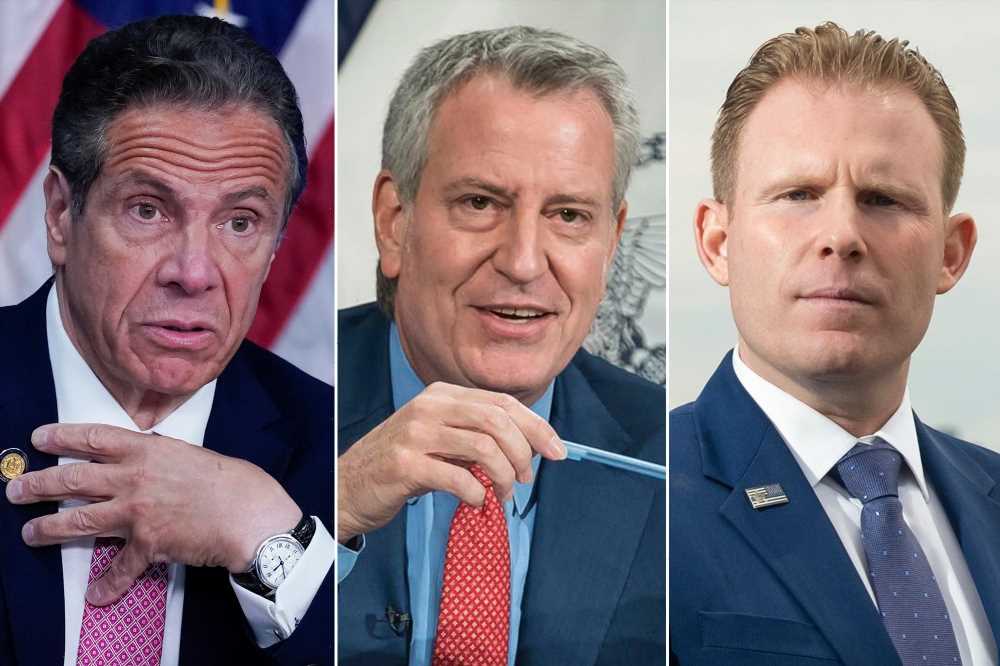 Mayor Bill de Blasio took the fifth Tuesday when asked whether he’d choose one of the GOP candidates running for governor over voting to re-electing his political archenemy, incumbent Gov. Andrew Cuomo.

“We are not going to talk about theoreticals today,” de Blasio said Tuesday during his remote daily press briefing from City Hall.

After punting on his response, de Blasio mulled his options aloud.

“Look, obviously I’m a Democrat and I’m a progressive and the Republican Party today is deeply troubling and the folks you mentioned are strong supporters of Donald Trump.

“But it’s just way too soon. I have been very clear that I think the governor should no longer be in office so 2022 is a long way away. We’ll make sense of it as it gets closer,” he said.

Andrew Giuliani in his announcement early Tuesday expressed confidence that he could knock the scandal-scarred incumbent — who is facing allegations that he tried to cover up the state’s coronavirus death toll in nursing homes, sexually harassed female staffers and used employees to write his $5 million memoir.

“Giuliani vs. Cuomo. Holy smokes. Its Muhammad Ali vs. Joe Frazier. We can sell tickets at Madison Square Garden,” the younger Giuliani said, referring to the famous 1971 heavyweight title prizefight.

Long Island Rep. Lee Zeldin is also running for governor as a Republican.

De Blasio has famously clashed with Cuomo on almost every city policy that involves state control — including the coronavirus lockdown, the MTA and charter schools.

But he also said Tuesday he’s no fan of Andrew Giuliani — or his dad.

“I don’t know Andrew Giuliani, I don’t want to hold the sins of the father against the son although the son just got through working for a president who supported an insurrection against the U.S. so that doesn’t say much positive,” de Blasio said.

“Look I think with all due respect to him this state is not going to smile upon anyone who was a Donald Trump supporter or aide. I think that’s the bottom line.”