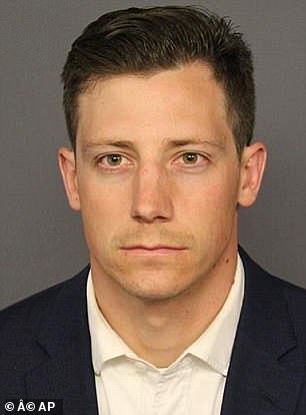 Chase Bishop, 30, pleading guilty to third-degree assault after accidentally shooting a man in the leg while dancing at a bar in June

The off-duty FBI agent who accidentally shot a person while dancing at a Colorado bar has pleaded guilty to third-degree assault to avoid jail time.

Chase Bishop, 30, was sentenced to two years probation after pleading guilty to the misdemeanor charge during a disposition hearing on Friday, according to the Denver Post.

He had previously pleaded not guilty to second-degree assault in November and had a disposition and motions hearing set for dates in January 2019, after having been offered an undisclosed plea deal at the time, the Denver Channel reported.

Bishop made headlines in June when a video of him dancing at the Mile High Spirits Tasting Room in Denver went viral.

In the video, which was taken on June 2, Bishop could be seen doing a backflip, during which his handgun fell from his waistband holster and onto the floor. 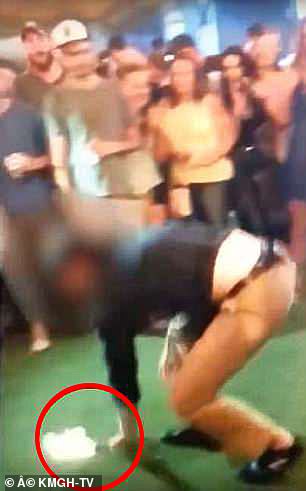 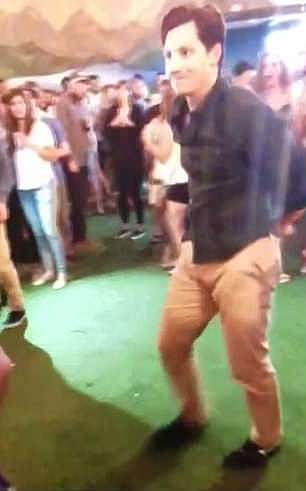 In a video, Bishop could be seen doing a backflip when his gun fell out of its holster. When he went to pick it up, the gun went off and the bullet struck a bystander

The firearm accidentally went off when he picked it up, with the bullet striking nearby Thomas Reddington, 24, in the leg. Seemingly unaware that someone has been shot, Bishop put the gun back into his waistband and walked off the dance floor with his hands up.

In June, Reddington, told Good Morning America that he had watched Bishop’s dancing footage a number of times and was still confused by how the shooting managed to occur. 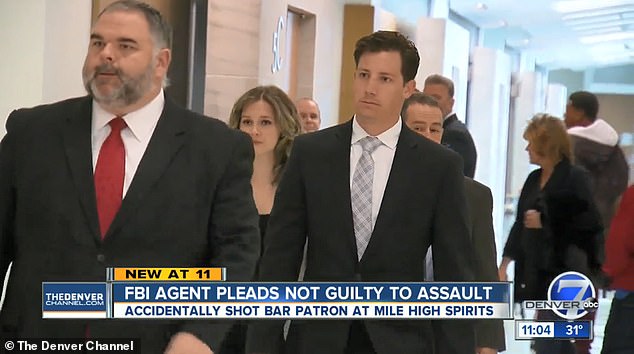 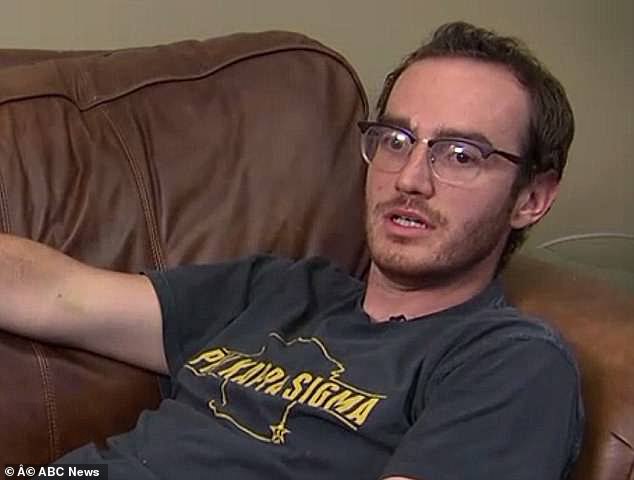 Thomas Reddington, 24, was sitting at a picnic table when the bullet from Bishop’s gun hit him. The bullet struck him just below the left knee and tore through his leg

‘We sat down at one of those picnic tables, I heard a loud bang and I thought some idiot set off a firecracker,’ Reddington said.

‘Then I looked down at my leg and see some brown residue. I’m still thinking it’s a firework… all of a sudden from the knee down my leg became completely red.

And that’s when it clicked in my head, ‘Oh, I’ve been shot’.

‘I like stand up and like start walking in a little circle saying, ‘Hey, I think I’ve been shot. Can someone call 911?’.’

The bullet struck Reddington just below his left knee and tore through his leg.

He said he blacked out and woke to find someone using a belt to put a tourniquet on his leg to stop the bleeding.

Bishop had been in Denver on a personal trip when the shooting occurred, CBS Denver reported.