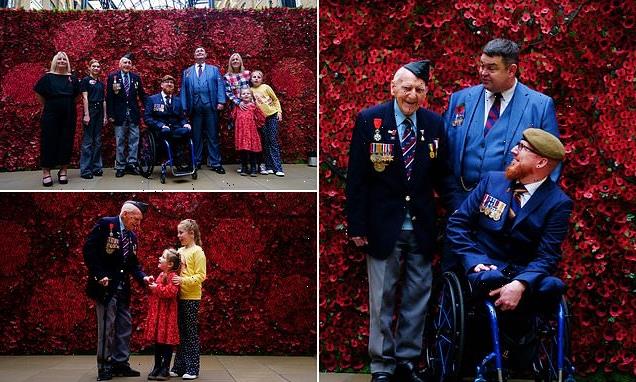 Bernard Morgan, the youngest RAF sergeant to land in Normandy on June 6, 1944, attended the grand unveiling with six others whose stories are featured on a huge red wall covered in paper flower tributes in Hay’s Galleria, central London.

Members of the public were invited to pick a poppy from the installation to uncover the story of someone who has received help from the charity.

Every year, the charity’s poppy appeal, run by volunteers during the period of remembrance, raises millions of pounds.

The money raised goes towards the charity’s work supporting the Armed Forces community, including serving and ex-serving personnel and their families.

The red poppy – a common sight on the Western Front – became a symbol of remembrance for those killed in the First World War and is now also worn as a tribute to those still serving. 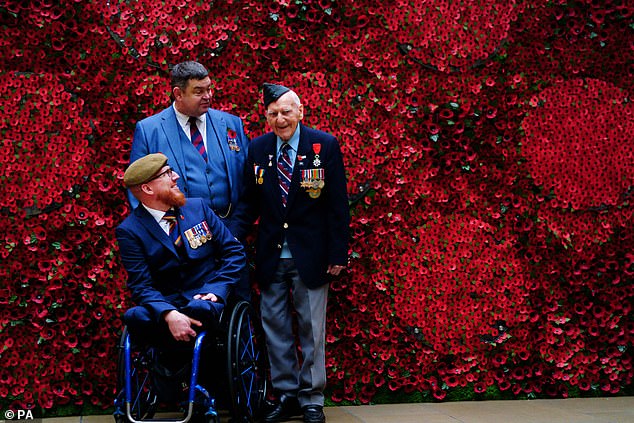 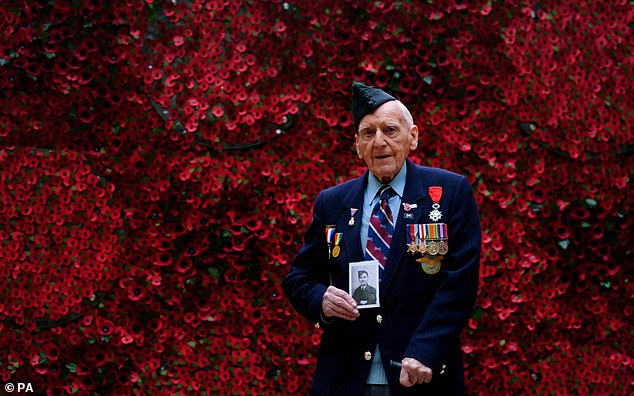 D-Day veteran Bernard Morgan, 98, had his story shared featured on the giant poppy wall during the launch of the RBL’s 2022 Poppy Appeal in London today

Veteran Clive Jones, 47, who has been blind for 21 years, said the RBL had helped him with the challenge of adjusting to civilian life after conflict.

‘It’s a wonderful thing that’s happening and I’m very proud to be here,’ he said.

‘When people wear their poppy it’s a mark of respect and pride. I think it’s very important that you wear the poppy and donate where you can because the Royal British Legion can help support serving soldiers, sailors, airmen and their families and veterans alike in their rehabilitation.

‘Adjusting to civilian lifestyle really wasn’t easy and the Royal British Legion has been there for me and my family since the start.

‘Now I’m 21 years into being blind and life is getting easier, but I know if the Royal British Legion can help me then they are there for me.’ 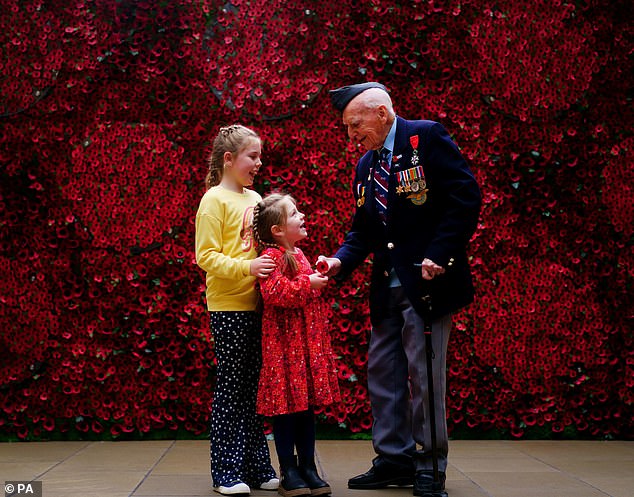 D-Day Veteran Bernard Morgan, 98, whose story is among those featured on the giant poppy wall, is given a poppy by Daisy and Maya Renard today

11-year-old Imogen said the RBL had introduced her to other children whose parents were in the Army through a charity-funded choir, helping them to ‘go through it together’.

She said: ‘We can all relate to each other and it’s easier for us to understand because when we say, ‘my dad is going to have to go away for six months’ someone else would be like ‘it’s going to be okay because we can go through it together because my dad has to go away as well so we can both be here for each other’.’

Her mother Rachel, 40, said: ‘It makes me sad to think about Imogen going through this. It’s difficult but to be honest it’s something that’s just become a part of our lives.

‘Sometimes we can phone, quite often we have to wait for him to phone us so whenever he does we drop everything that we’re doing,’ she said. 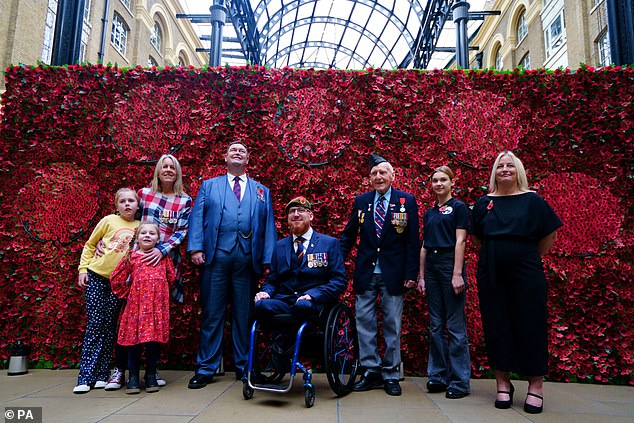 ‘The children are incredibly resilient and I think they sacrificed quite a lot having parents in the armed forces but we wouldn’t have it any other way.’

Andy Taylor-White, fundraising lead at the RBL, said supporting the charity was a way of showing respect to ‘veterans before who have given the ultimate sacrifice’ as well as serving members.

‘That’s very relevant right now. We’re supporting people with cost of living grants but also veterans who are in need of welfare and support.

‘As a veteran myself from the Royal Navy, respecting the fact that we have generations of veterans before who have given the ultimate sacrifice but also, we have people serving today who are willing to stand up and protect our way of life.’