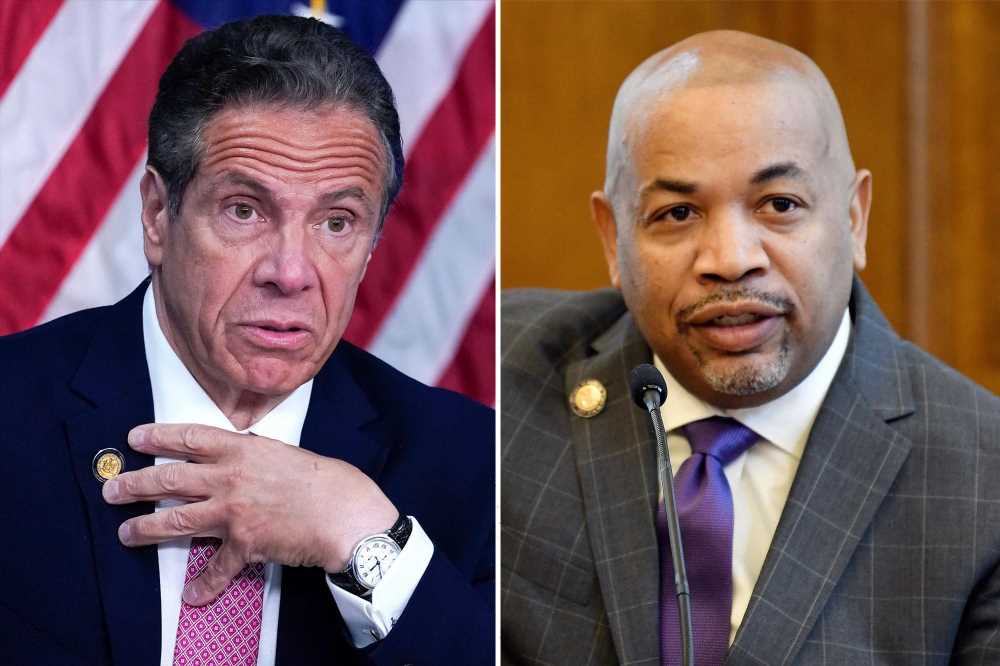 Assemblyman Ron Kim (D-Queens) said he got the message from an aide to Heastie in response to comments he made about The Post’s reporting that top Cuomo aide Melissa DeRosa had admitted in a meeting with Albany Democrats that administration officials withheld the total death toll from both lawmakers and the public.

The speaker’s aide told Kim that Heastie (D-The Bronx) was “relaying the message” — in which Cuomo provided a statement for Kim to walk back his remarks — on behalf of the governor, the assemblyman said.

“The Post article did not put into proper context my comments concerning the meeting, so I think it is important to provide more perspective,” read the statement texted to Kim, which he provided to The Post.

“The purpose of the meeting was to get overdue responses to questions we had, and I believe it was productive.”

Kim said he was “stunned” when he saw the message, adding, “I came to the conclusion that if I put out this statement, that I would be complicit in the cover-up.”

“Beyond that, the thousands of families I told I would protect — I would have thrown them under the bus,” he added.

The comments that apparently infuriated Cuomo included Kim telling The Post that he suspected the governor was “trying to dodge having any incriminating evidence that might put the administration or the [Health Department] in further trouble with the Department of Justice.”

After Kim refused to retract his remarks to The Post, Cuomo called him at home and threatened to “destroy” him, Kim has said previously.

Government watchdogs blasted Heastie upon being informed of his role in relaying Cuomo’s initial message to Kim.

“There’s no excuse for the Speaker’s office colluding with the [governor’s office] to clean up its mess,” said Susan Lerner of the nonpartisan group Common Cause New York.

“The Legislature is a co-equal branch of government, not a laundering service for the Governor.”

Cameron Macdonald of the conservative Empire Center for Public Policy called Cuomo’s request to Heastie “problematic” and said “it was inappropriate for the Speaker to act on it.”

“They placed party politics and loyalty over accountability,” Macdonald said.

“Such coordination between the Governor and the Speaker casts doubt on the Speaker’s desire to lead the Legislature’s oversight role.”

State Sen. Gustavo Rivera (D-The Bronx) said, “We need to be concerned…because we are an independent branch of government and we should operate independently from the executive.”

“But it’s par for the course that the governor’s office will look for any and all angles,” added Rivera, who recently revealed he was interviewed by federal authorities investigating Cuomo’s handling of nursing homes during the pandemic.

In March, Heastie authorized the Assembly Judiciary Committee to launch an impeachment investigation of Cuomo but he recently came under fire because the contract for the committee’s outside lawyers allocated just $250,000 for their services.

That amount works out to barely three weeks of full-time work by the four lawyers, who are each being paid $600 per hour to assist with the sprawling probe.

The investigation is focused on the nursing home deaths, as well as a series of sexual harassment allegations against Cuomo, bridge-safety issues and reports that the governor improperly arranged coronavirus tests for his relatives and had state employees work on his recent, $5 million memoir.

Committee Chairman Charles Lavine (D-Long Island) on Wednesday said that the $250,000 contract only represented an “an initial cap” on the legal spending.

“The cap may be amended as needed, and it will need to be amended here,” he added.

Heastie spokesman Michael Wyland said of the Kim email, “The Governor’s office suggested that comments made on the Zoom meeting were taken out of context. The only individuals who could potentially verify whether that was in fact true were people who were on the call, so we simply relayed a message, which is something we always do.

“At no point did we suggest or encourage any member to say or do anything, period!” he said.

A Cuomo spokesman confirmed they reached out to Kim through Heastie’s office, claiming “like we’d normally do with the Senate or the Assembly, this was relayed through leadership.”