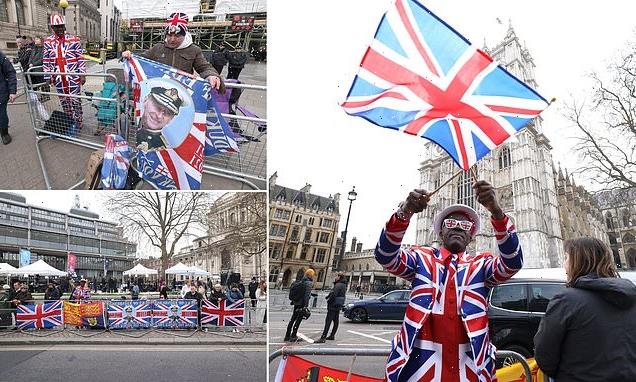 Royal fans line the streets for Philip: Crowds waving flags and banners travel hundreds of miles to gather outside Westminster Abbey from the early hours ahead of memorial service

Royal super fans travelled hundreds of miles in the early hours to line the capital’s streets with flags and banners this morning in anticipation of the service of thanksgiving for the Duke of Edinburgh.

Some 1,800 people are expected to attend the memorial at Westminster Abbey, with millions more tuning in to the BBC’s broadcast at home.

Around 50 people congregated beside barriers near the entrance to the abbey in an attempt to catch a glimpse of royal family members making their way inside.

Royal enthusiast John Loughrey, 67, has been waiting outside the venue since 6.30am for Philip’s memorial service.

He said: ‘It’s the funeral he never had because when he died the country was still in lockdown.

‘I wanted to go but I and others respected the Queen’s wishes not to turn up so I stayed at home and watched the service on television. Although I did lay flowers later at Buckingham Palace and Windsor Castle.

‘That’s why I and many others are here today, to support the Queen and the Royal family. She’s had a tough time in her 70th Jubilee losing her husband and her soul mate.

‘But I think it’s also important to show the Duke the respect he deserves because he was an inspiration to his country and to his people.’ 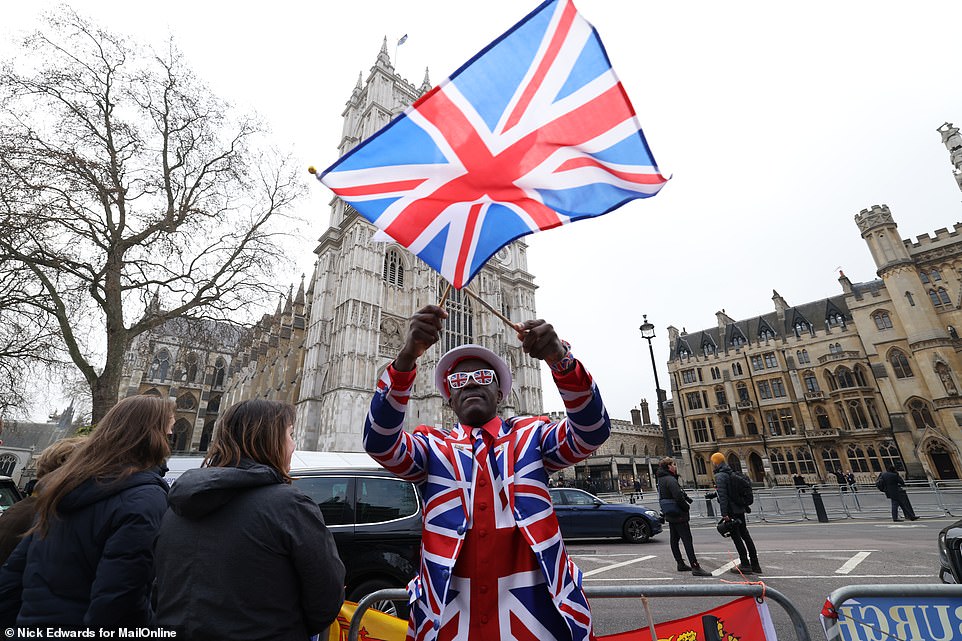 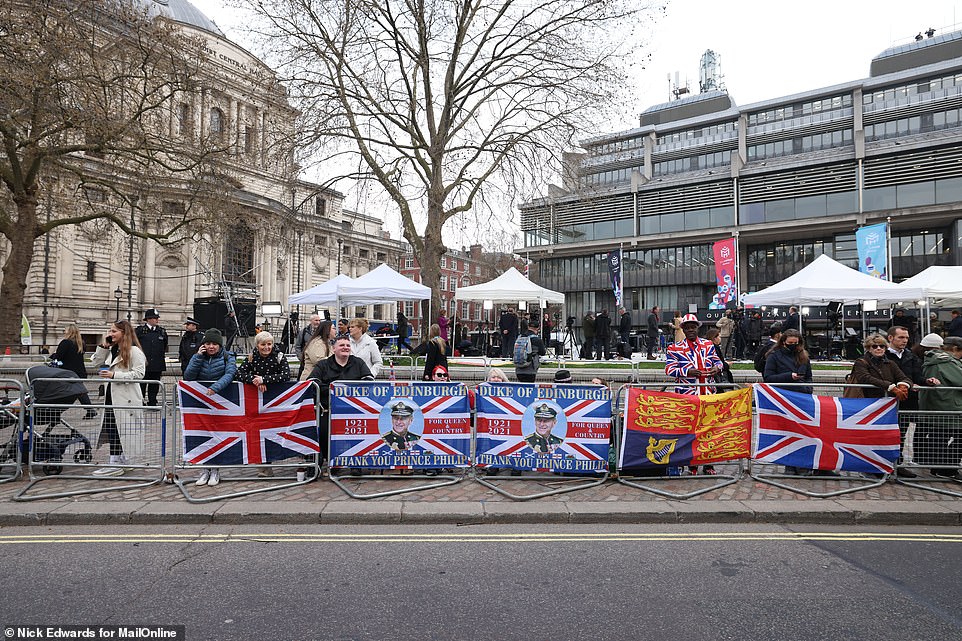 Some 1,800 people are expected to attend the memorial at Westminster Abbey, with millions more tuning in to the BBC’s broadcast at home 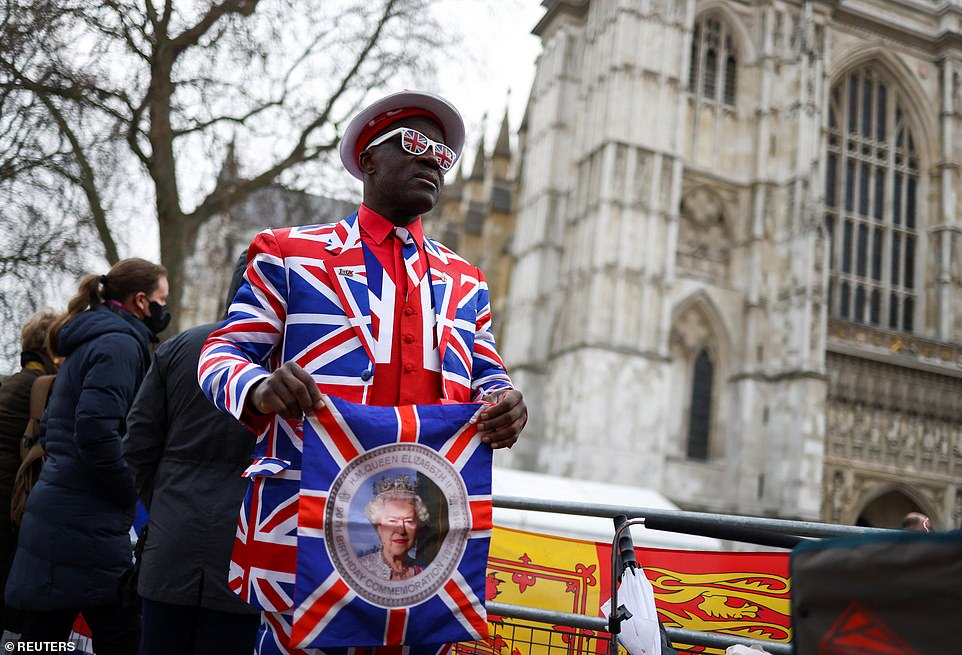 A royal enthusiast, dressed in a Union Jack flag suit, holds a bag with Queen Elizabeth’s portrait before the service of thanksgiving for late Prince Philip 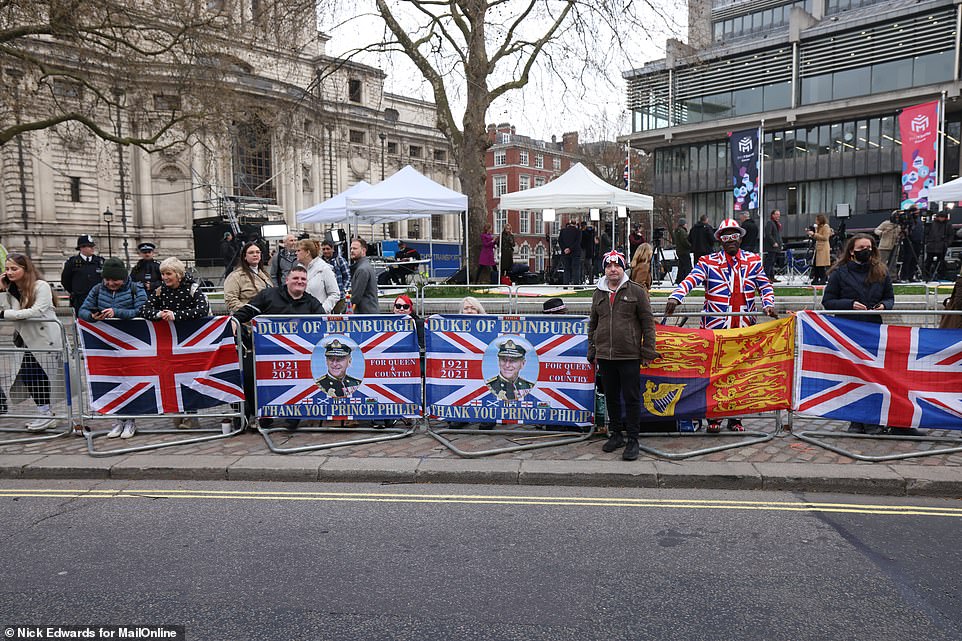 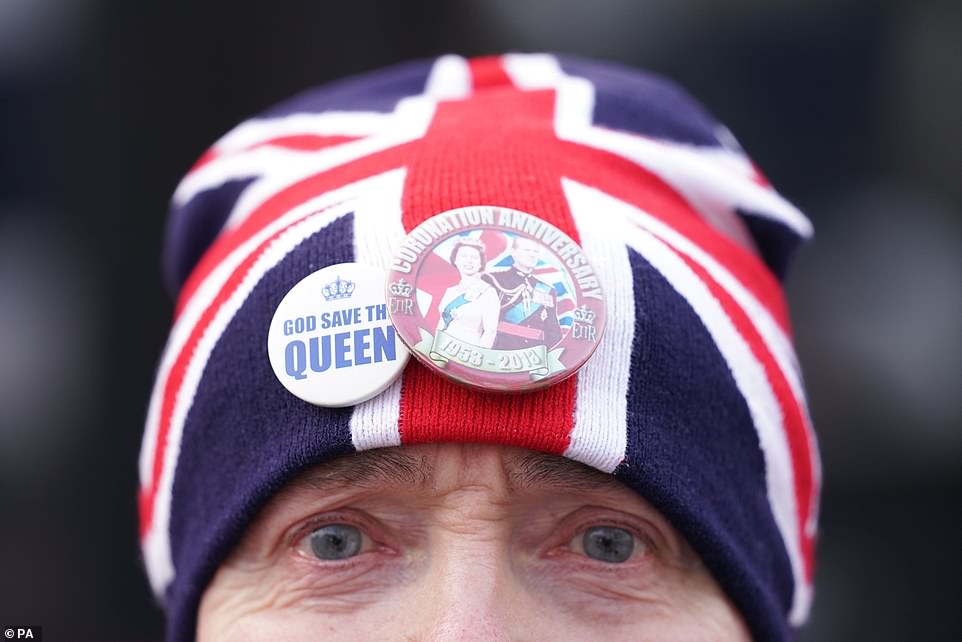 Royal fan John Loughrey waits for the arrivals for a Service of Thanksgiving for the life of the Duke of Edinburgh, at Westminster Abbey in London 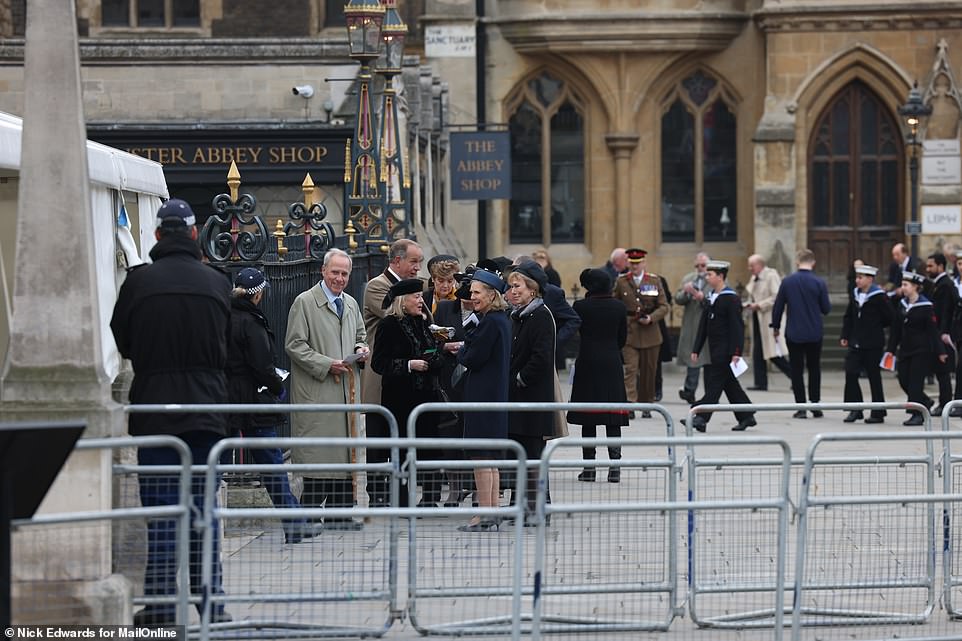 The Queen will remember her husband of 73 years at the ceremony, which is also due to be attended by more than 20 close relatives including the Prince of Wales, the Duchess of Cornwall and the Cambridges 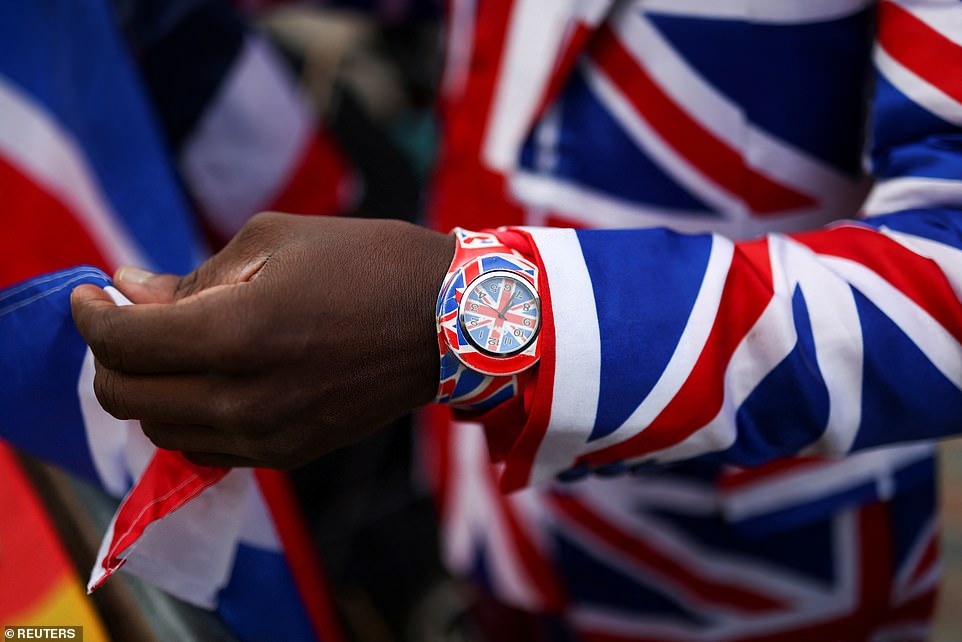 Details on the clothing of a royal enthusiast are seen before the service of thanksgiving for late Prince Philip, Duke of Edinburgh

Maria Scott, 51, was also at the Abbey at the crack of dawn after travelling nearly 300-miles from Newcastle.

She said: ‘I think it’s a huge honour to be here today, as a big Royalist I was really disappointed not to be able to attend his funeral last April.

‘He was a big force in the Queen’s life and in the Royal family so I’m sure she will be here today even if she has to use a walking stick.

‘I never met the Duke, I’d camped out at Windsor Castle during the Queen’s 90th birthday celebrations and he was walking towards us but moved to the other side of the road just before he got to where we were standing so our paths were never meant to cross.

‘But I wished I had met him as he had a wicked sense of humour and it would have been great to hear what he had to say. I hope today is a fitting way with which to remember him.’

The Queen will remember her husband of 73 years at the ceremony, which is also due to be attended by more than 20 close relatives including the Prince of Wales, the Duchess of Cornwall and the Cambridges.

The monarch, 95, has rallied to make an appearance and lead her family at the high-profile and personally significant occasion in honour of husband Philip.

She made the final decision earlier today, hours before she was due to travel from Windsor Castle to central London, having been determined to be at Westminster Abbey if her mobility allowed her.

It is a poignant occasion for the Queen to remember her husband of 73 years among family and friends, after the limitations imposed on the duke’s funeral during the pandemic.

A Palace spokesman said: ‘The Queen is currently intending to attend the service this morning.’

While plans could change before the start of the service at 11.30am, preparations will now be in full swing for the monarch’s appearance.

The duke’s relatives, friends, colleagues and his charities and patronages are gathering to pay a more fulsome tribute to the man whose funeral last April was only attended by 30 of his loved ones.

Special arrangements have been put in place for the Queen’s comfort, with the service limited to 40 minutes and the monarch sitting in one of the Canada chairs but with an additional cushion.

The difficulty for the Queen was understood to be whether the monarch would be able to walk to her seat.

BBC cameras are likely to avoid filming the monarch as she makes her way through the back of the Abbey via Poets’ Corner – a shorter route to place in the Lantern.

Traditionally, the Queen used to arrive at the Great West Door, and walk the length of the church, through the Nave and the Quire.

But, in October, when she attended the Royal British Legion centenary service using a walking stick, she arrived at Poets’ Yard, entering via Poets’ Corner. 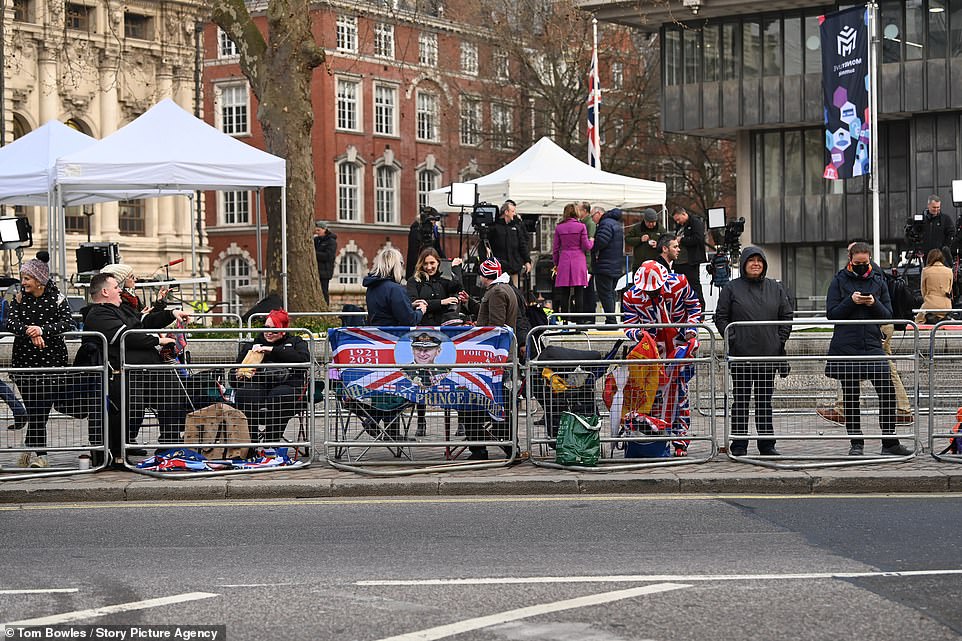 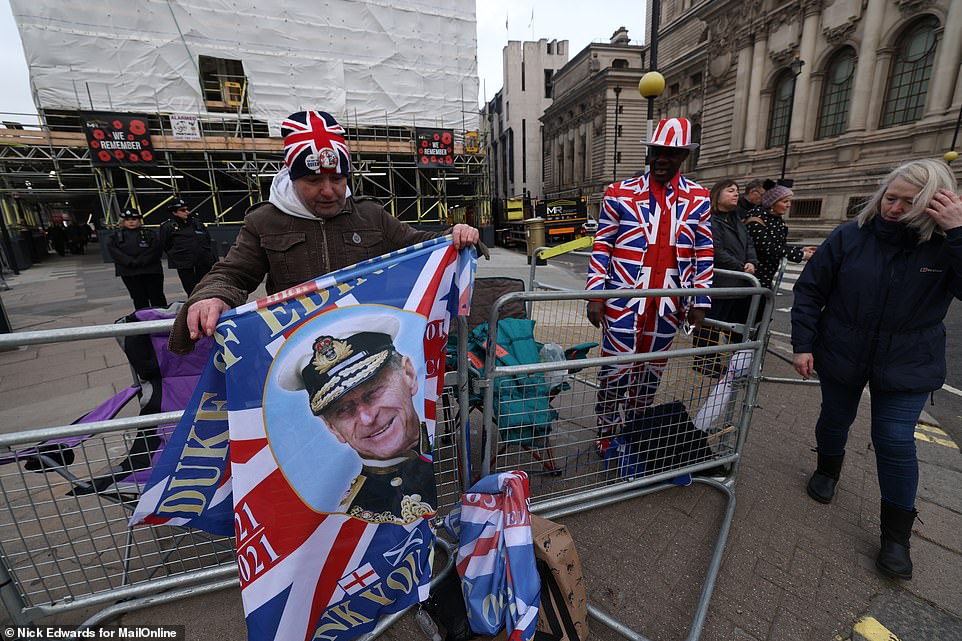 Royal enthusiast John Loughrey, 67, has been waiting outside the venue since 6.30am for Philip’s memorial service 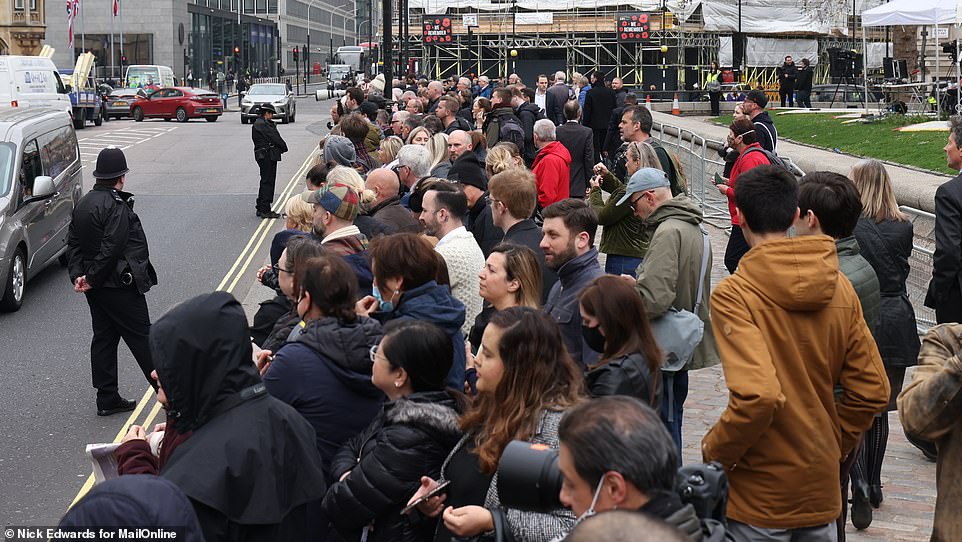 The monarch has only attended one major event with the public since concerns were raised about her health in October when she spent a night in hospital undergoing tests and she was put on doctors’ orders to rest.

Seven weeks ago, on February 5, on the eve of her Platinum Jubilee, she hosted a reception at her private Norfolk residence, Sandringham House, for local charity workers, former estate staff and fellow Women’s Institute members.

Tuesday’s service will be the Queen’s first major official engagement outside one of her homes for five and a half months, since she travelled to Cardiff to deliver a speech at the Welsh Senedd on October 14.

She pulled out of attending the Commonwealth Day service at the abbey earlier this month, a significant date in the royal calendar given the family of nations’ importance to the monarch.

On that occasion it is understood mobility issues for the Queen, who now sometimes walks with a stick, and the need to provide for her comfort prevented her from joining senior royals and the congregation.

Many of her light duties are now carried out by video calls, and the nation’s longest reigning sovereign, who turns 96 in three weeks, said during a recent in-person audience: ‘Well, as you can see, I can’t move.’

The Queen faced a bout of Covid in February, but has since recovered.

Questions will remain over her attendance during the jubilee weekend – a busy four-day extravaganza with a pop concert, church service, pageant and Trooping the Colour.

The duke is to be remembered as a ‘man of rare ability and distinction’ at the abbey, with the event featuring elements he planned for his own funeral which were forbidden due to Covid-19 restrictions.

Gold Duke of Edinburgh’s Award holders and members of the youth UK Cadet Force associations will line the steps of Westminster Abbey as guests arrive.

The duke’s wishes for the congregation to sing the rousing hymn Guide Me, O Thou Great Redeemer, and for clergy from Windsor, Sandringham and Balmoral to play a special part, will finally be granted on Tuesday.

More than 20 members of the royal family including the Prince of Wales, the Duchess of Cornwall and the Cambridges will join nearly 30 foreign royals including the King and Queen of Spain and Prince Albert of Monaco.

It is understood some of Philip’s older great-grandchildren may attend, giving the youngest generation of royals the chance to honour their great-grandfather.

Among those seated in the abbey will be the Duke of York, despite Andrew paying millions out of court earlier this month to settle a civil sexual assault case.

He will arrive alongside his daughters Princess Beatrice and Princess Eugenie, and their husbands Edoardo Mapelli Mozzi and Jack Brooksbank.

In the 1,800-strong congregation will be Prime Minister Boris Johnson and wife Carrie, Philip’s wider family and friends, and 500 representatives from his patronages and charities.