A CRAZED circus bear has savaged his trainer just feet away from horrified kids as families ran away in terror.

Video shows the moment the performing bear went wild in a circus ring and attacked the man as children screamed in fear in Russia. 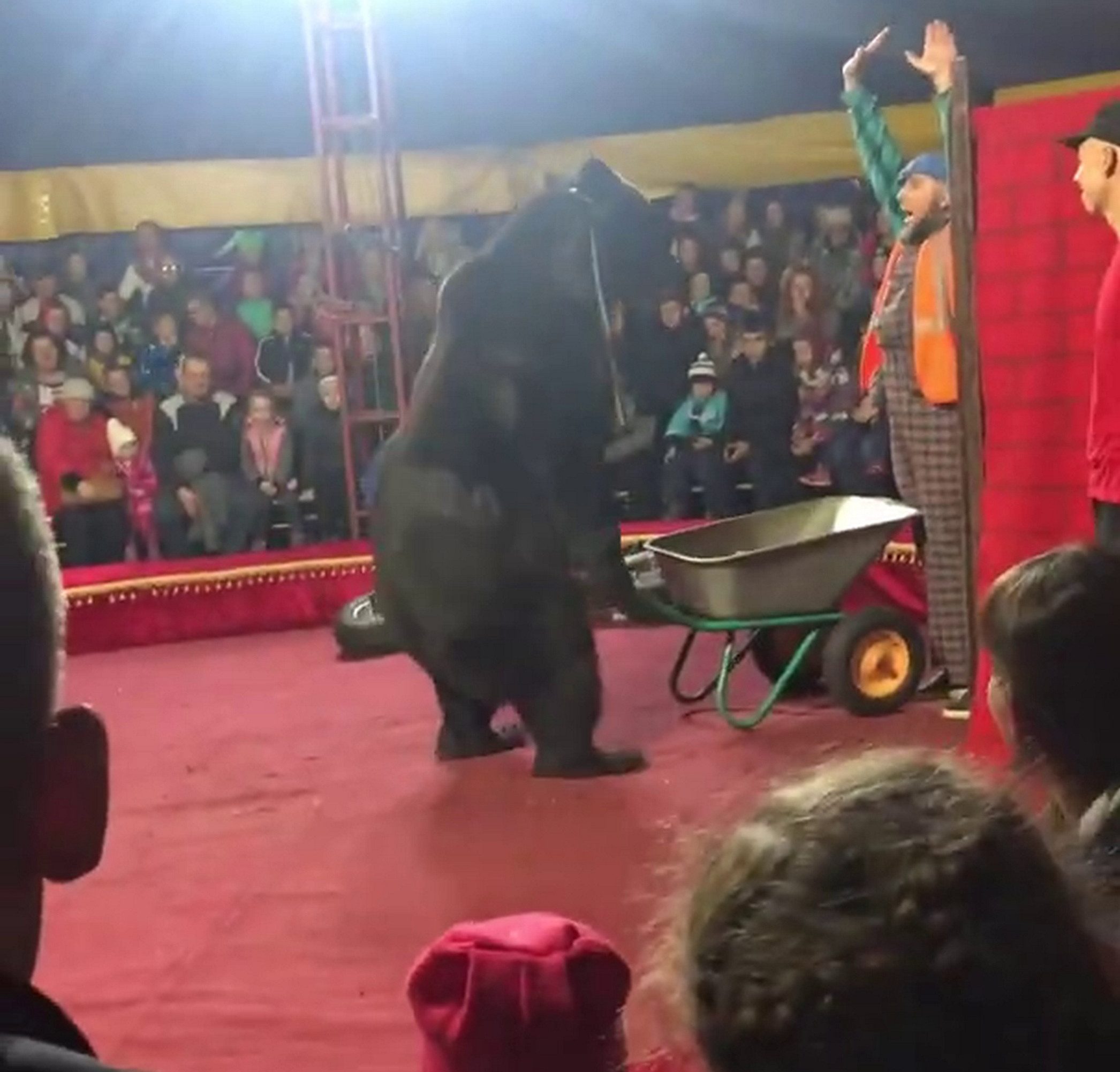 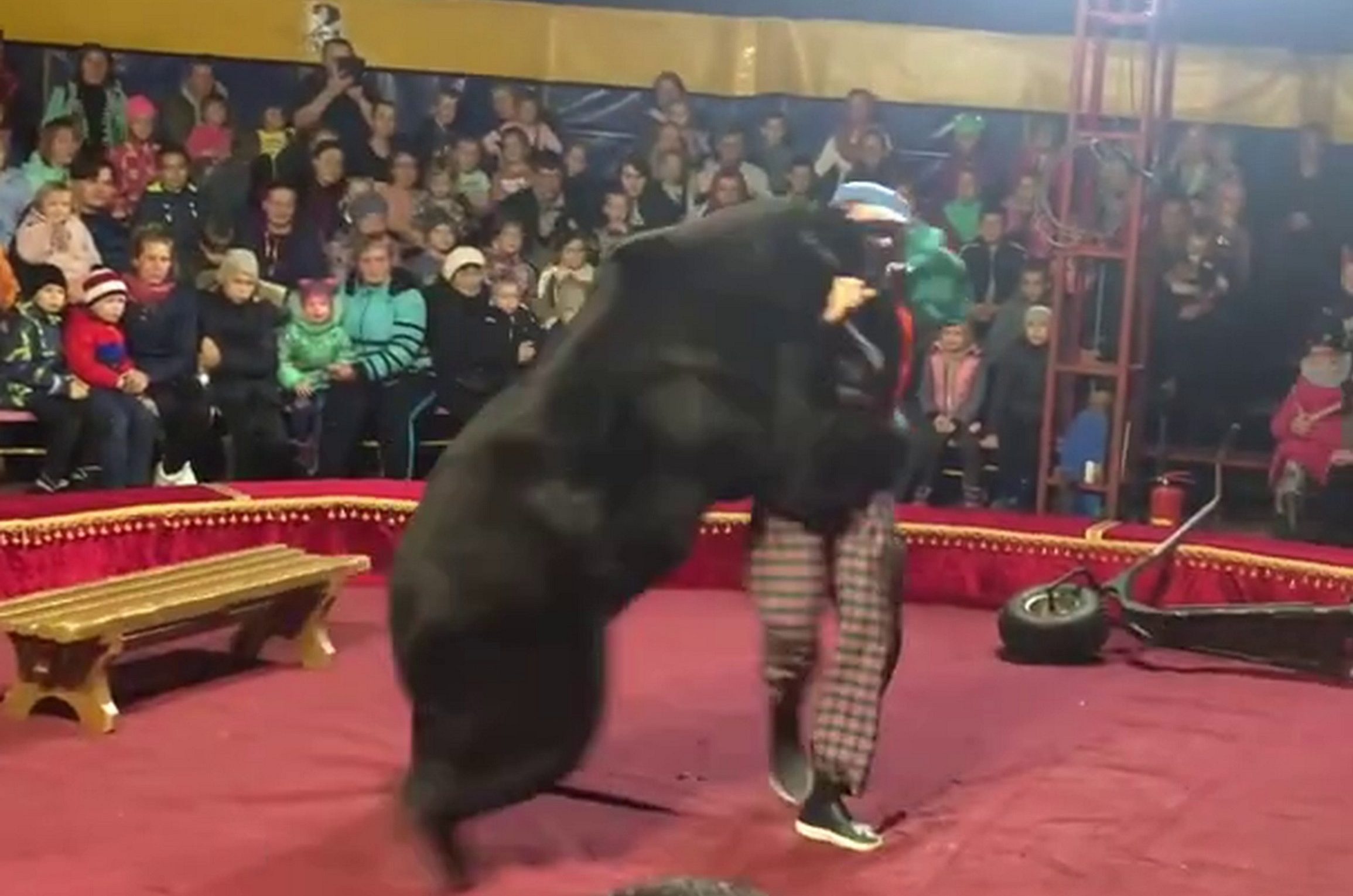 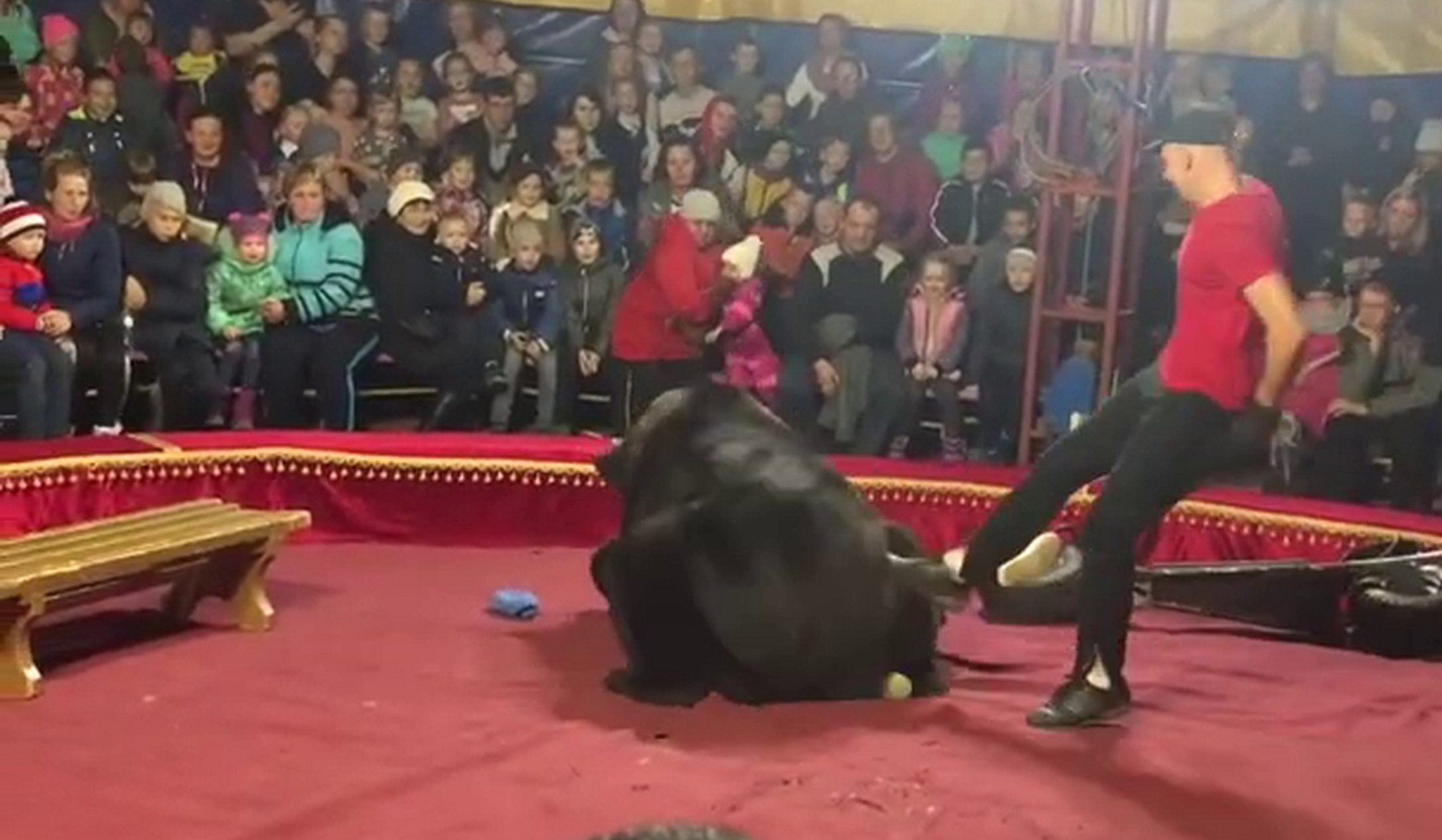 After the brown bear was forced to push a wheelbarrow along the circus ring, while walking on its hind legs, the muzzled beast overpowered its trainer, knocking him down and leaping on top of him.

Children sitting just feet away – with no protective barrier – screamed as another circus employee repeatedly booted the bear to bring it back under control.

When that failed to stop the 600lb animal, it was electrocuted with an electric shock device as the audience fled for the only exit in the travelling circus’s big top.

The trainer floored by the bear was understood to be injured but no further details of his condition were given to local media. 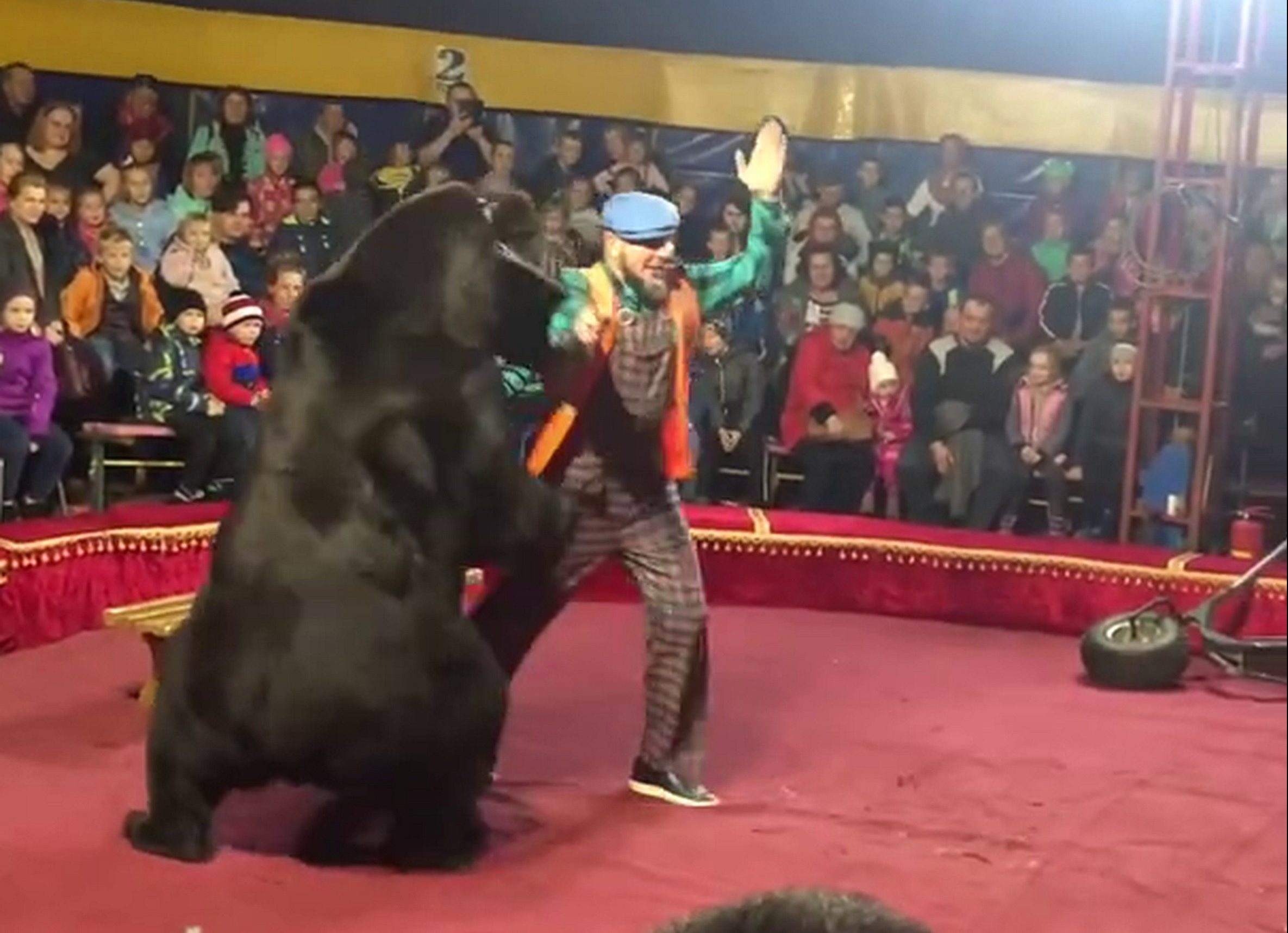 Mum-of-one Galina Gurieva, 27, who filmed the distressing scene in the town of Olonets, northeast Russia – bordering Finland – said: “My knees are still trembling.

“I was shocked there was no fence for the safety of spectators, given the size of the bear.”

Another parent said: “The spectators rushed outside in panic, including me.”

One visitor posted on social media: “It was an enormous bear, and they lost control of him.”

And another added: "At first, everyone thought it was a script.

"But when the assistant started kicking the bear and pulled out the shocker, the panic started.

"People got up and ran to the exit."

After the bear had been shocked into submission, the animal was said to be in a "frenzied state in the arena, terrifying the people".

The bear was the star attraction  at the Anshlag Tent Circus and this performance was billed as "Bow-legged and the Wheelbarrow”.

A dad said: “We expected to see cute cubs and they brought in a huge grizzly-terminator.

“They did not protect children and adults from possible attack.”

Police and safety officials are investigating the bear's attempt to escape the circus.

Travelling circuses with live animal performances remain popular in Russia despite growing campaigns for bans or curbs on such events. 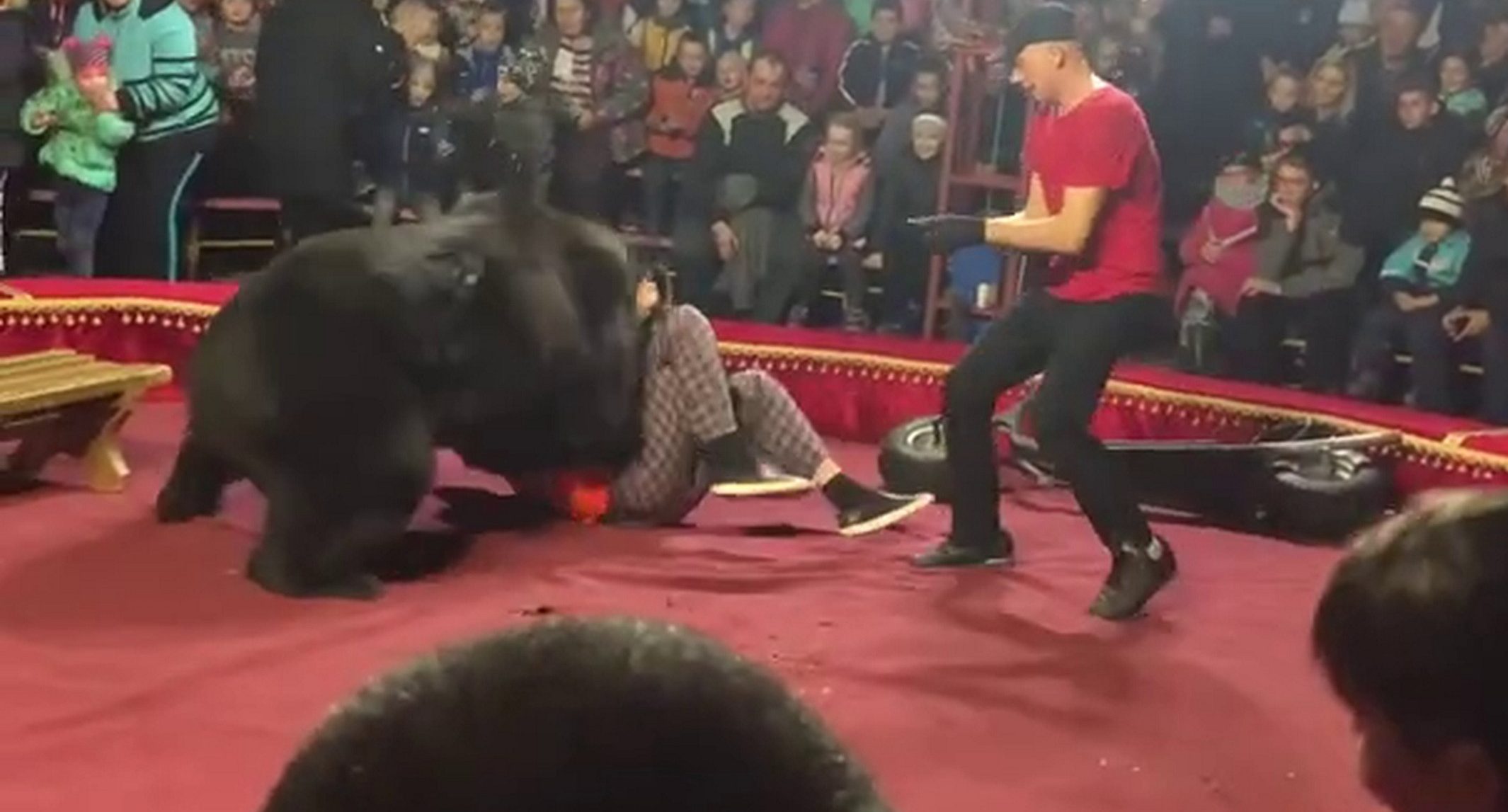 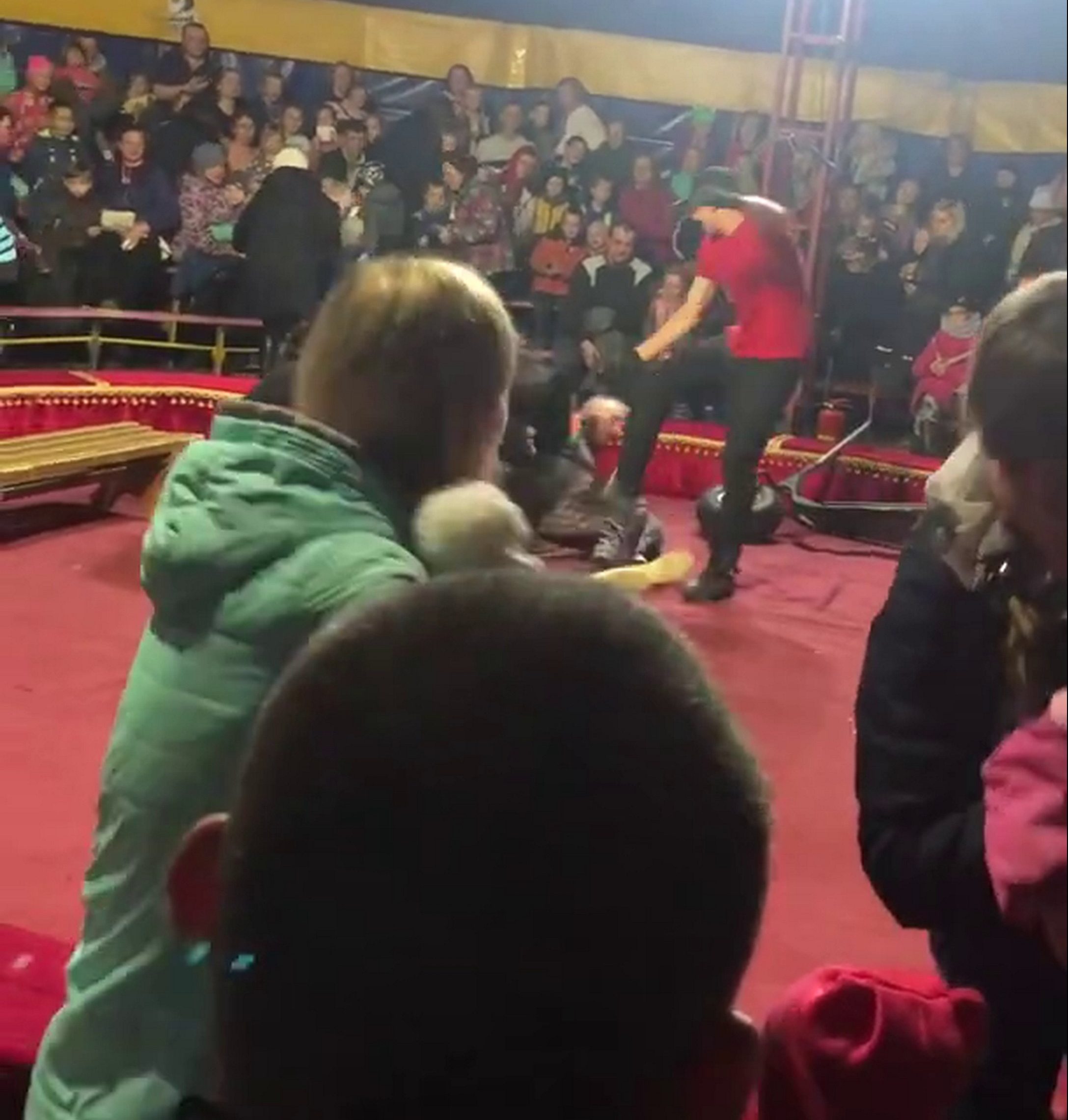