Western Australia's hard border with Victoria will be reinstated from midnight going into New Year's Day in response to a growing coronavirus outbreak in Melbourne.

From 12.01am on Friday, only travellers from Victoria with a valid exemption will be allowed to enter the state and will be required to isolate for 14 days. 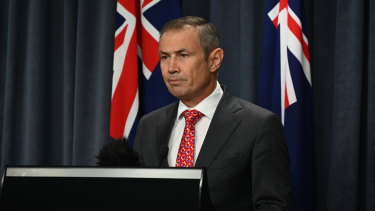 People who have been in Victoria since December 21 will also need to self-isolate for 14 days immediately and get tested for the virus on day 11 of their quarantine – or earlier if they develop symptoms of the disease.

Acting WA Premier Roger Cook said exemptions would be assessed on a case-by-case basis and follow the same criteria as restrictions rolled out for New South Wales on December 19, which include senior government officials, active military personnel, and transport industry workers.

West Australians who travelled to Victoria over the Christmas holidays will be allowed to return home on compassionate grounds.

"In light of the outbreak of Victoria will strengthen its border controls to reduce the risk of the virus getting into our community," Mr Cook said.

"What we feared happened occurred, it appeared the virus has jumped the border to Victoria. Clearly, we are dealing with an unpredictable situation that is like to get worse before it gets better."

Mr Cook acknowledged the pain the hard border would cause families planning to reunite in the new year but added the virus "does not respect celebrations".

There are eight flights scheduled to land at Perth Airport from Melbourne on Thursday and another eight on Friday, carrying a total of approximately 3000 passengers.

Victoria recorded five further cases of COVID-19 on Thursday in addition to three women who tested positive on Wednesday, bringing the total number of cases to eight.

The new cases are among more than 70 close contacts of the original three in the Melbourne areas of Hallam, Mitcham, and Mentone, which stretch into parts of regional Victoria.