The number of people dying from coronavirus has risen by 40 per cent in a week, official data shows.

Six out of nine regions in England recorded a rise in coronavirus deaths, with the North East recording the largest number, at 39, and the highest proportion of fatalities involving the disease.

Flu and pneumonia killed eight times more people than Covid-19 in the week ending September 18, at 1,197, as the number of fatalities caused by the conditions rose six per cent compared to last week, at 1,125, and 37 per cent compared to two weeks ago, when the total was 874.

Today’s figure marks the third week in a row where Covid-19 deaths have risen, a 78 per cent increase after they hit 78 deaths at the beginning of the month – which was the lowest number since the pandemic struck in mid-March. The weekly tally remains far below the 8,000-plus weekly deaths seen at the height of the crisis in mid-April.

But the ONS report showed that fatalities from all other causes were above the five-year average for the second week in a row.

The number of people dying in hospitals remained below the five-year average, while deaths in private homes stayed above the measure. Deaths in care homes fell below the average compared to last week.

More than 711 people are dying in their homes than the five-year average suggests, from a slew of conditions including heart disease, stroke and cancers.

Experts say many people are still too scared to use the NHS for fear of catching Covid-19, while others don’t want to be a burden on the health service.

Flu and pneumonia were mentioned on the death certificates of 1,197 people, a six per cent rise on last week and up from 874 at the start of the month.

The Government has launched the UK’s biggest flu vaccination programme for 30million people amid fears the NHS could be hit by a ‘double whammy’ of flu and coronavirus this winter. But experts have predicted that providing social distancing measures remain in place, the outbreaks will not occur as the disease spread is reduced. 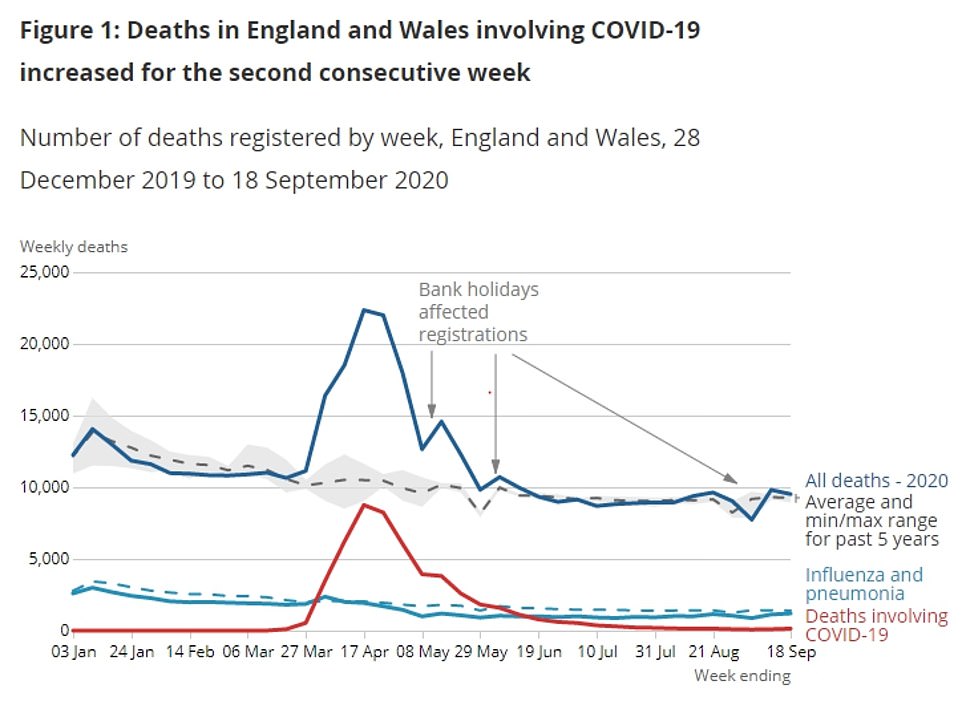 The number of deaths involving coronavirus in England and Wales has risen 40 per cent in a week. This graph shows deaths from Covid-19 (red) compared to total deaths (blue) and the average for the past five years (dashed line) 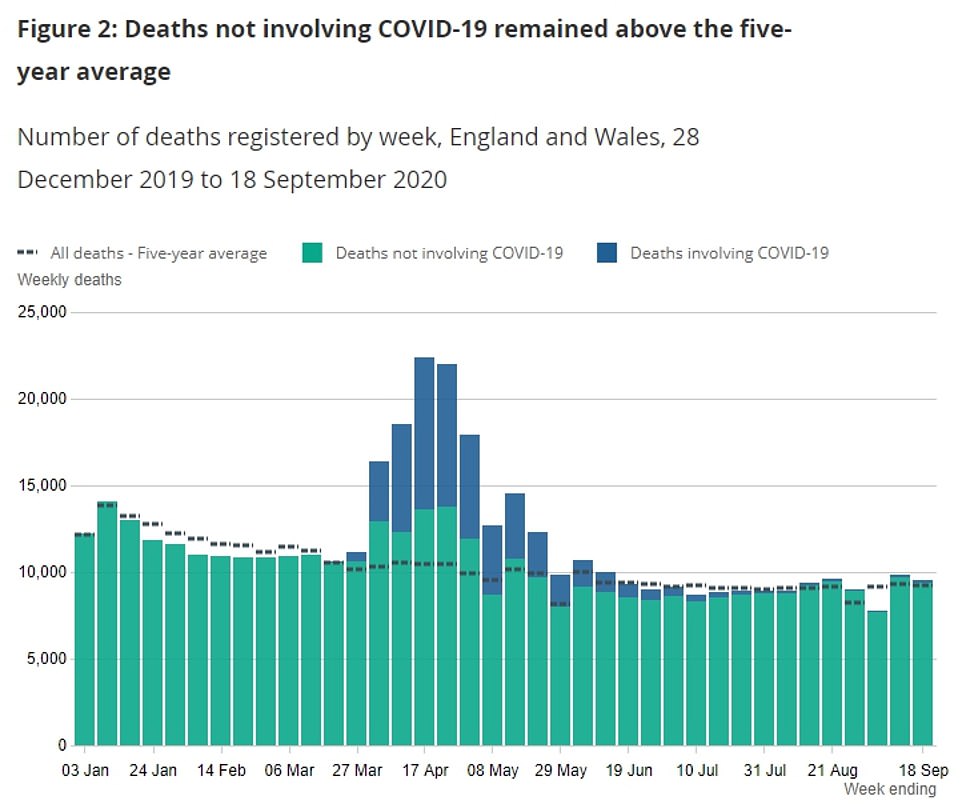 The total number of deaths in the UK remained above the five-year average, this graph reveals, with 259 deaths more than was expected. Statisticians had estimated that deaths may drop below the five-year average as coronavirus sped up the deaths of those that would have died from other causes 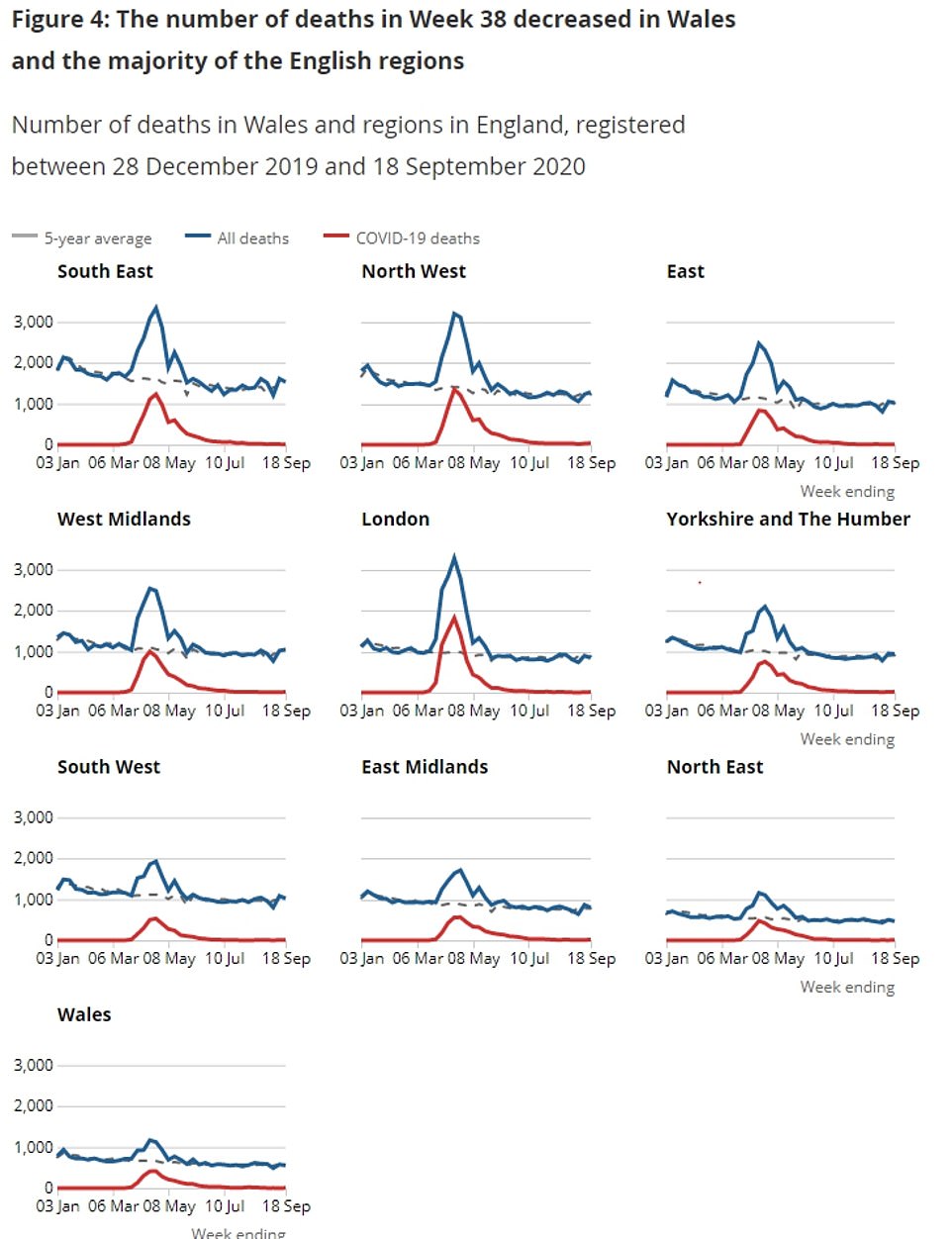 Deaths from coronavirus rose in six of the nine regions of England. The North East and London were the only two regions to record fewer overall deaths than the five-year average

It is the second week in a row that deaths are above the five-year average, after 9,811 people passed away in England and Wales last week.

The North East and London were the only two of the nine English regions to record fewer overall deaths than the five-year average, as the number of coronavirus deaths rose in six regions.

Pensioners could face severe delays getting a flu vaccine this winter, with a surge in demand caused by the coronavirus pandemic leading to shortages.

High street pharmacies Boots and Lloyds have suspended bookings for those aged 65 and over at branches across the UK.

Meanwhile, waiting lists at some GP surgeries are at high levels, leading to a potential several week wait for the jab for the elderly.

It means that those aged 65 or above are facing the prospect of being without a flu vaccine over the winter, despite the government promising that, as the most vulnerable, they would be at the front of the queue.

Officials are aiming to immunise 30 million Britons this winter, in the largest flu vaccination programmer ever undertaken in the UK, to ensure health services are not overwhelmed by a sudden influx of Covid-19 and flu patients.

But some experts have insisted Britain ‘almost certainly’ will not see two consecutive waves of flu and coronavirus.

Flu infections during the cold long months in the southern hemisphere are a canary in a coalmine for how hard the NHS will be hit by outbreaks, and are used to design the preventative flu vaccine. But this year Australia and New Zealand have escaped a bad flu season, which top experts say is down to social distancing measures.

The data showed that deaths involving coronavirus in hospitals almost doubled from 1.6 per cent in the week ending September 11 to 2.5 per cent, and rose in care homes from 1.3 per cent to 1.6 per cent.

But care homes and hospitals are still recording fewer deaths than they normally would at this time of year, with more being recorded in private homes.

Professor David Spiegelhalter, from the University of Cambridge, said this may be a ‘positive’ change as ‘most people would prefer to die at home than in hospital’.

‘It depends on the care and support the family are receiving,’ he added. ‘Only eight out of these 700 extra at-home deaths in England and Wales had Covid-19 on the death certificate.’

The ONS said the change may be because hospitals are treating fewer patients due to Covid-19 precaution and social distancing measures.

Care homes are also reporting fewer deaths than the five-year average. ONS experts explained that Covid-19 likely sped up the deaths of people who would have died of other causes, meaning the year’s fatalities have been front-loaded.

The Government agency also published a new figure, revealing 52,631 people’s death certificates mentioned coronavirus by September 18, or 11.9 per cent of all deaths in England and Wales. In Scotland, 4,246 people have died from coronavirus since the outbreak began.

Northern Ireland has reported 893 deaths from Covid-19 by September 18, meaning a total of 57,113 people have died from the disease in the UK since the outbreak began.

This tally includes all patients who had the virus mentioned on their death certificates, even if they weren’t diagnosed with the virus or had a confirmed test.

Of all deaths involving coronavirus, data shows that hospitals have recorded 63.4 per cent of the total, or 33,386 fatalities.

The NHS Confederation warned today that hospitals are set to be overwhelmed this winter as they try to get through a ‘huge’ backlog of operations as ‘exhausted’ staff battle against reduced capacity due to infection control measures.

Hospital trusts were ordered to get services back to 90 per cent capacity by mid-October, but with staff absences due to testing problems and mounting demands on health services, bosses fear the ambitious goals will not be met.

In their survey of 252 NHS trust leaders, they found 74 per cent were not confident their services would meet the national targets to bring routine operation levels back up to normal levels. 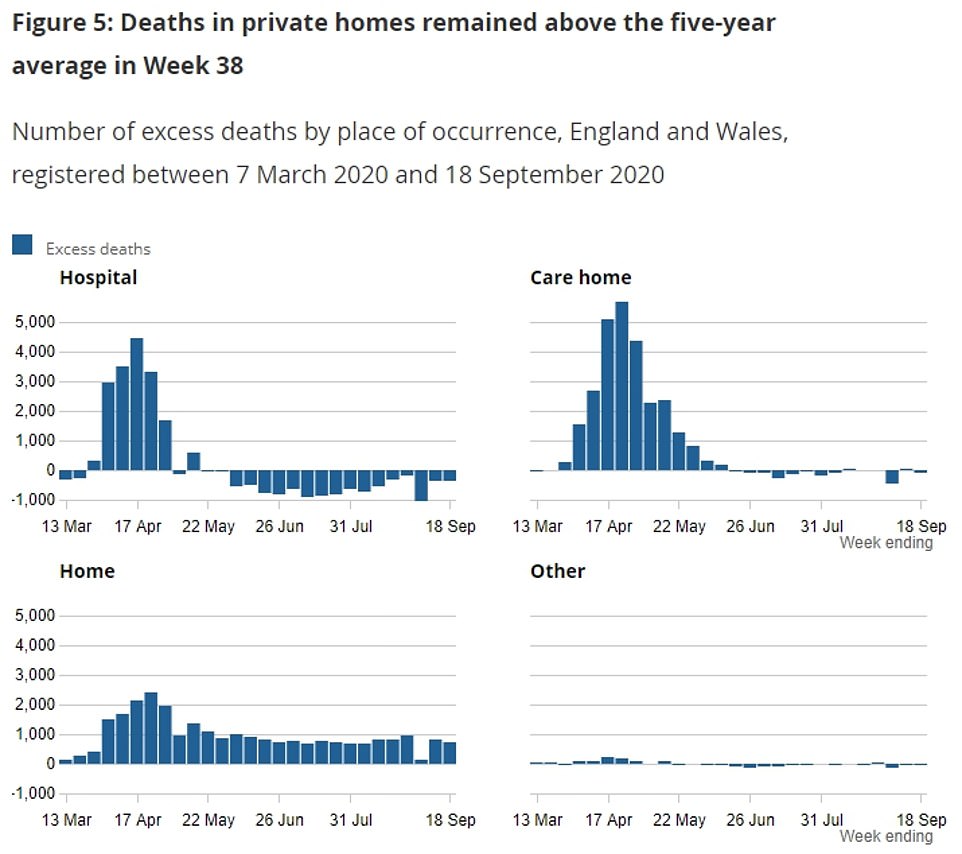 Deaths in private homes rose above the five-year average this week, but remained below it in hospitals. They also dropped below the level for care homes 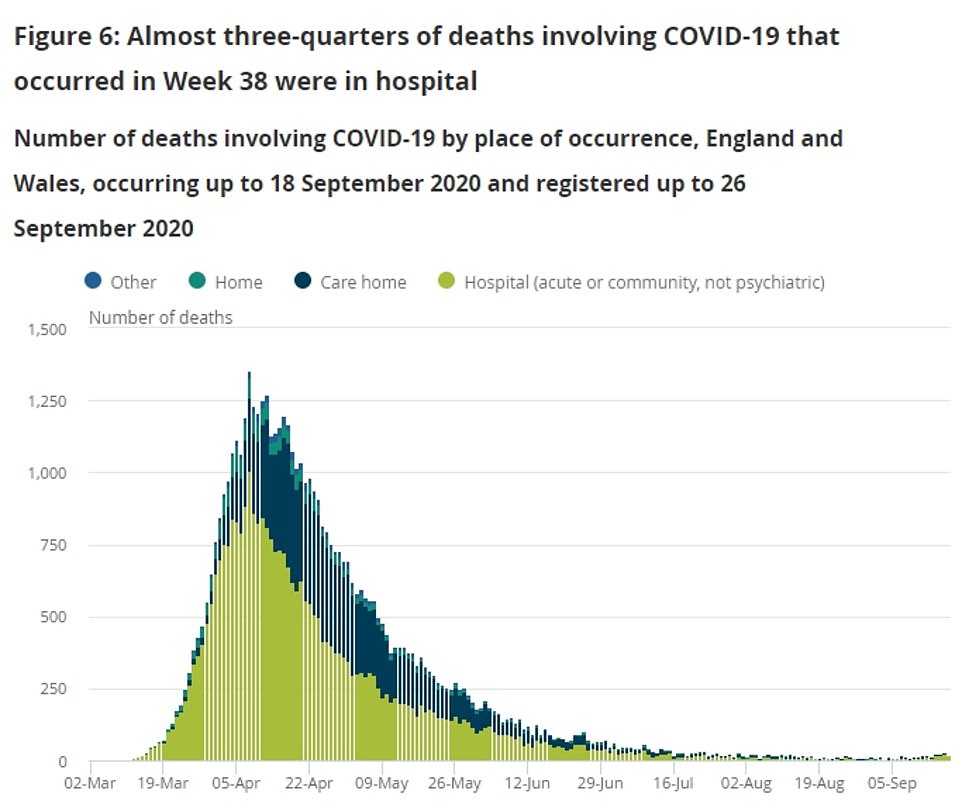 As much as 64 per cent of deaths involving coronavirus occurred in hospital (light green) in the week up to September 18. This graph shows the deaths broken down by place of death 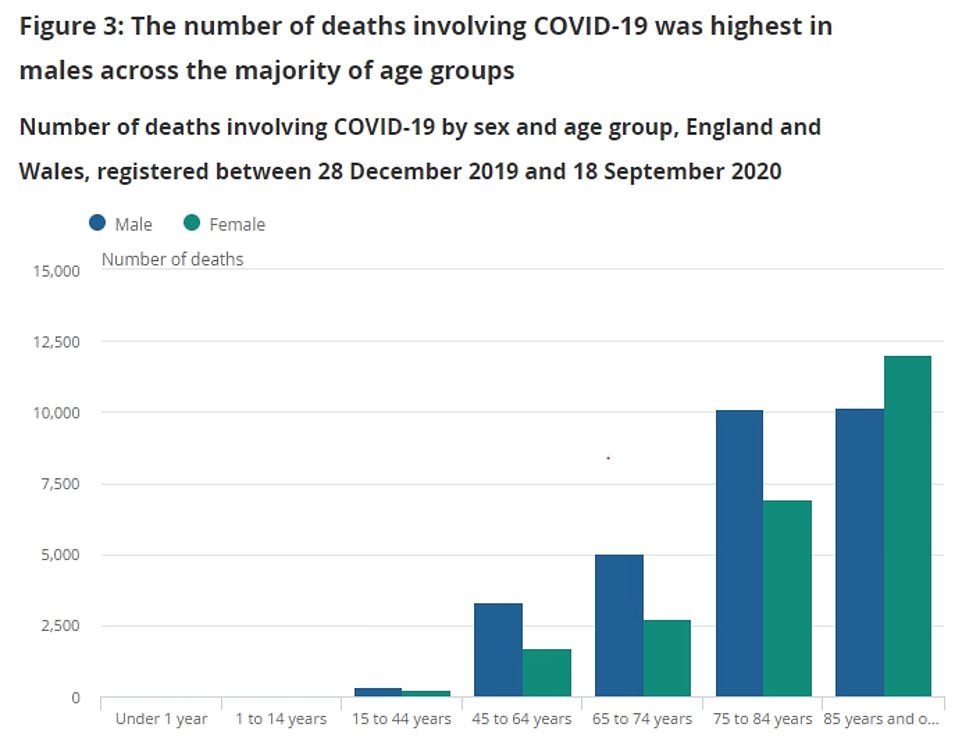 People aged from 75 and over are most likely to die from coronavirus, according to this chart, while very few deaths have been recorded in those aged zero to 44. The charts are split by sex (Male in blue and Female in green)

The Confederation, which represents the majority of hospital trusts in England, also called on the Government to ‘grasp the nettle’ in their report – NHS Reset – and implement reforms to safeguard the funding of health and social care services for years to come.

Lord Victor Adebowale, chairman of the NHS Confederation, said: ‘Covid-19 has been the biggest disruptor in the NHS’s history. Out of necessity, it has transformed patient services in ways previously unimagined and changes that would usually take years have been delivered in weeks.

‘This is the moment for Government to grasp the nettle, be bold and invest in a health and care system not just for this winter but for the long term.

‘Above all, we need to see a radical and conscious shift in every part of the country towards tackling health inequalities. If there is one lesson from the pandemic, it is that our universal health service does not care for everyone equally.’