Something NEW: Couples will be able to marry in private gardens, beaches, their own homes and even over ZOOM under plan to bring marriage into the 21st century

Couples will be able to marry in gardens, beaches, their own homes or even over Zoom as part of a new plan to bring marriage into the 21st century.

The Law Commission, an official body that scrutinises UK legislation, said the rules around weddings in England and Wales are antiquated and ‘no longer meet the needs of many couples’.

Victorian-era legislation bans couples from marrying outdoors and requires ceremonies to take place in an officially-sanctioned building, usually a church of registry office. 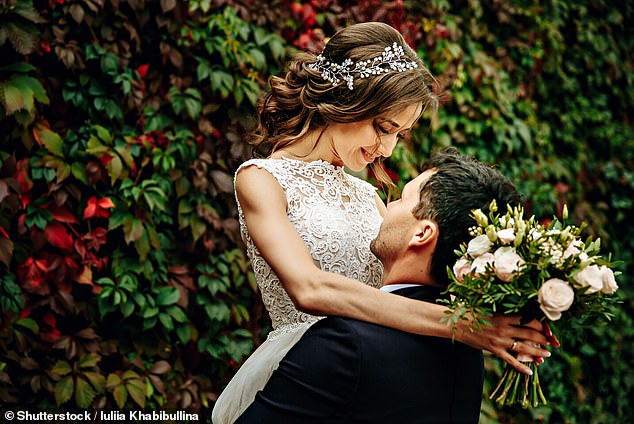 The Law Commission, an official body that scrutinises UK legislation, said the rules around weddings are antiquated and ‘no longer meet the needs of many couples’. File photo of a couple embracing in a garden

The Commission wants to slash the red tape around weddings to widen the number of venues where they can take place to include new alternatives like cruise ships or, in the event of another pandemic, over Zoom.

Since 1994, couples have been allowed to marry in certain ‘approved premises’ other than churches and registry offices, but this list is currently limited.

The commission also believes couples should not have to choose between an official civil or religious ceremony but be able to opt for one that reflects other beliefs.

The wedding ceremonies of other religions, like Hinduism and Islam, are not recognised under UK law.

The current rules around weddings dating from 1836

Couples must currently choose between a civil or a religious ceremony, with no option for a ceremony reflecting other beliefs.

To get legally married, most couples must have their weddings in a registered building – either a place of worship or a licensed secular venue. They cannot marry outdoors, even in the garden of a licensed venue.

The process for getting married is complicated, inefficient and does not work well for some religious groups. This can lead to couples failing to comply with the legal requirements and their marriage not being legally recognised.

This means that some people could be taking part in marriages in the belief that they are legally-recognised when they are actually not.

Currently, the only option as it stands is for these people to have an unofficial religious marriage followed by a legally-binding civil ceremony.

For historic reasons, Jews and Quakers have been able to marry according to their own rites since the 17th century.

Professor Nick Hopkins, Family Law Commissioner at the Law Commission, said: ‘A couple’s wedding day is one of the most important events in their lives, yet the 19th century laws are not fit for purpose and stop many couples having a wedding that is meaningful and personal to them.

‘Our proposals would give couples the freedom to choose the wedding venue they want and a ceremony that is meaningful for them.

‘By doing so, we hope to make the laws that govern weddings reflect the wishes and needs of today’s society.’

The commission believes laws in England and Wales need to catch up with more modern approaches in Ireland, Scotland and the Channel Islands.

Couples can marry anywhere they want in Scotland and can make use of ‘authorised celebrants’ – who do not have to be a vicar of registrar.

In Northern Ireland, which recently legalised gay marriage, there is no restriction on the location of religious marriages, although civil marriages can only happen take place in approved venues.

The Law Commission also wants laws to be updated to allow weddings to happen remotely, such as over Zoom, in the event of another pandemic. 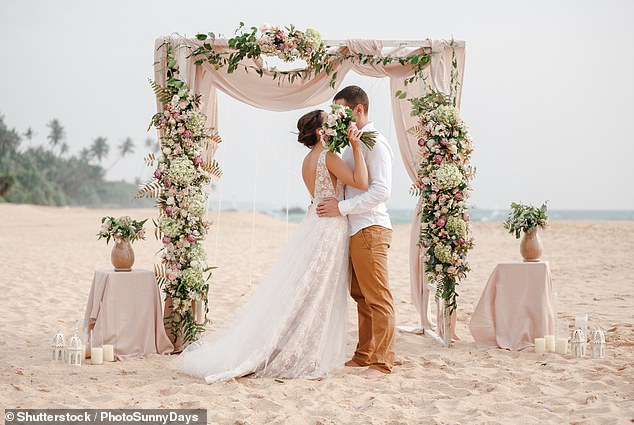 Victorian-era legislation bans couples from marrying outdoors and requires ceremonies to take place in an officially-sanctioned building, usually a church of registry office. The Law Commission believes this should be extended to venues like beaches (file photo)

A spokesman for the Church of England told the BBC it would study and respond to the proposals.

‘Our research shows that being married in a place that has meaning is still important to couples and their families,’ they said.

‘The moments of waiting to walk down the aisle, standing at the steps and exchanging timeless vows that can only be said in a church, and turning to walk out of the church as a newly-married couple, are cherished.’ 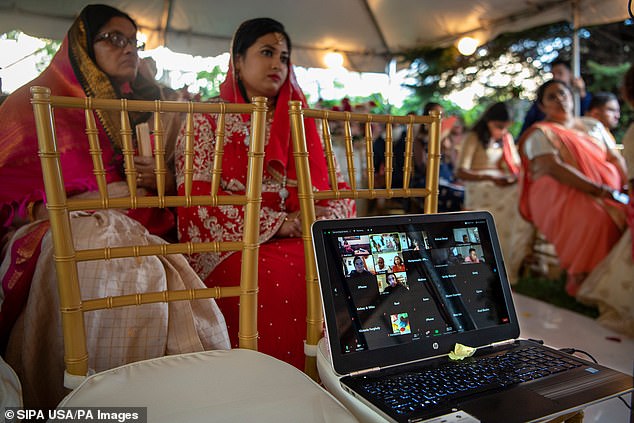 A couple in the USA having a wedding via Zoom, in a scene that could be repeated in the UK under plans to cope with a future pandemic

How weddings would change under the proposed plans