A ‘Bonnie and Clyde’ couple were seen canoodling moments before storming a Spar to steal £210, a court heard.

Before she burst into the store, Ashley Turner-Platt, 30, shared a kiss with her 28-year old boyfriend Ashley Turner and whispered: ‘That’s an easy shop to rob’.

Turner-Platt ordered the couple who ran the store to hand over the takings whilst menacingly holding the cleaver above her head and grabbing a male victim by the throat.

The couple who are both from Blackpool were jailed for a total of 11 years at Preston Crown Court. 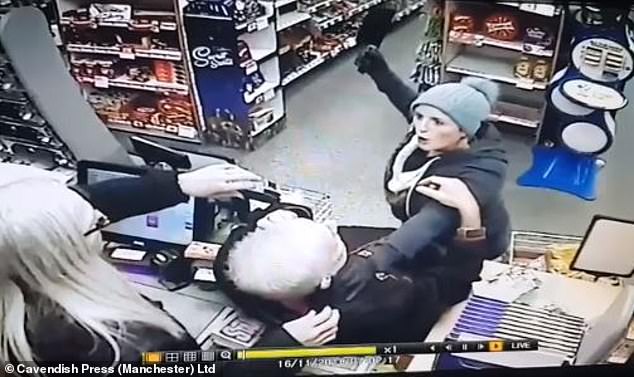 Dramatic CCTV pictures captured Ashley Turner-Platt burst into Spar shop in Blackpool, Lancashire, holding a meat cleaver above her head and ordering couple who run it to hand over the takings 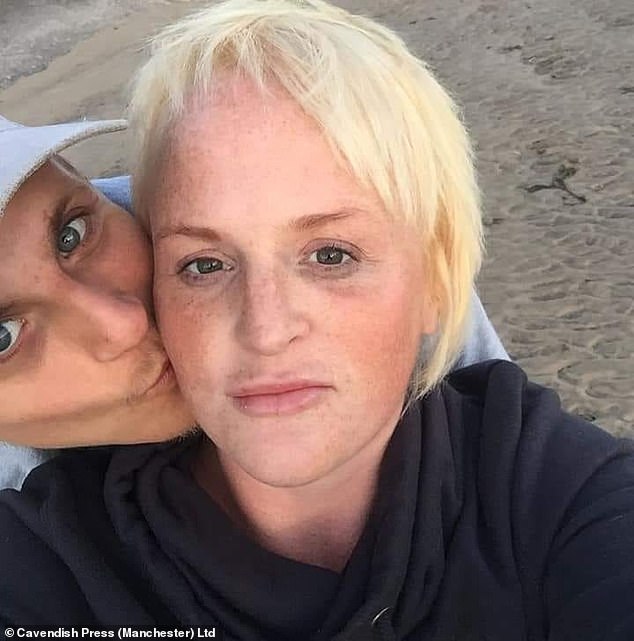 The couple, pictured, were arrested after Turner-Platt’s photograph was circulated through a public appeal. Both gave no comment in police interview.

Shopkeeper Susan Evans, 63, who was behind the till, initially refused to hand over the money but Turner-Platt grabbed her husband, Lee, 65.

As Mr Evans tried to call 999 she pushed him onto the counter, held the cleaver over his face and made chopping motions as she shouted: ‘Just give me the f*****g money.’

Mrs Evans eventually handed over £210 and Platt and her boyfriend were seen running away and dumping the meat cleaver in an alleyway.

The pair, who between them have committed 46 previous criminal offences, were later arrested.

In a statement Mr Evans said the couple who had the run the seaside store in Blackpool, Lancashire for 15 years were now considering quitting their jobs.

He said: ‘Although I have experienced some degree of emotional stress, my wife has experienced it the worst. This was an extremely distressing incident and it was deeply upsetting for us. I have lost sleep over this. I lost £210 from the till, but I have also lost between £1,400 and £1,500 in takings while the shop and post office have been closed for the police investigation.

‘I don’t trust people as much anymore and I find myself constantly checking the CCTV. My wife and I have run this business for 15 years without anything of this nature happening. Now we want to get out of the business significantly earlier now.

‘Before the robbery, I intended to run the business for another two years, but I can’t stop thinking about the incident where the meat cleaver was in my face and the woman was screaming ‘give me the money.’

‘She grabbed me by my jacket and literally threw me into the till well and was yelling at Sue to open it. Having been a butcher I know what those cleavers are like and she wasn’t messing about. She got more and more agitated every second.’

Mrs Evans said: ‘We have always felt secure and safe inside our premises, but this has now changed. I feel very vulnerable, nervous and anxious now. My trust in my customers has been destroyed and I treat them all with a degree of suspicion now. I have hardly slept at all since this incident and I have frightening nightmares.

‘As a result, I am constantly tired. I agree with my husband that it’s not worth the risk to keep this place for much longer, considering how close we came to being seriously injured. When she first said, ‘Give me the money’, I honestly thought she was joking. ‘Her face was pure evil when she was shouting at us. It was absolutely terrifying for both of us.’

The couple pleaded guilty to robbery.

Turner-Platt who used to live in Radcliffe, near Bury was jailed for five years and Turner who had serving a suspended sentence for assault was sent to prison for six years and 10 months.

The court heard the raid occurred after the pair were seen passing the shop at 7am on November 16 last year.

Prosecuting, David Clarke, said: ‘They were seen walking down an alleyway appeared to walk past the Spar store and then they come back towards the store. They returned to the alleyway and they appear to be having a kiss before they move back down the street.

‘It would appear from the circumstances that the meat cleaver has been collected from a nearby address. They approach the store and Ashley Turner stood by the door, keeping it open, while Ashley Turner-Platt went in and up to the counter.

‘Mr and Mrs Evans were both working together, with one or two customers already in the shop, when Ashley Turner-Platt came in and walked straight to the counter and said ‘give me the money’.

‘She was told not to be silly, and she stayed calm at first and just kept asking for the money. Then Lee Evans realised that she had a meat cleaver in her hand. Ashley Turner is outside with his hood up during the incident whilst in the store, a customer was backing away and Lee Evans walking over towards Ashley Turner-Platt who is approaching the counter, with Susan Evans behind it.

‘The meat cleaver is very clearly shown throughout the footage. Clearly things escalated and Lee Evans is pulled over to the counter by Ashley Turner-Platt. Susan Evans tries to help, but then immediately opens the till and hands over approximately £200.’ 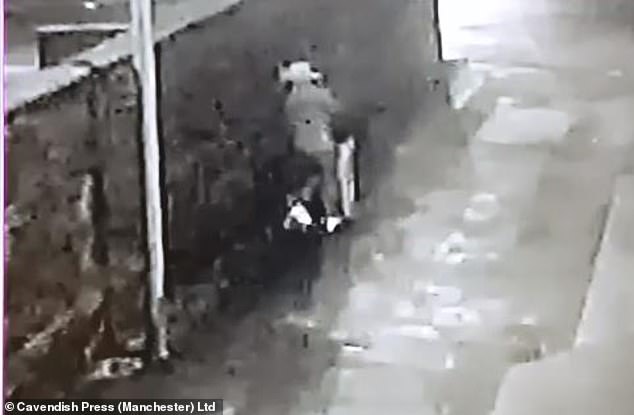 Mother of three Ashley Turner-Platt, 30, and 28-year old lover Ashley Turner shared a kiss and whispered: ‘That’s an easy shop to rob.’ before enter with a meat cleaver

The couple were arrested after Turner-Platt’s photograph was circulated through a public appeal.

In mitigation for Turner-Platt, defence lawyer Rachel Cooper said: ‘She had been drinking and she says it was her partner, Ashley Turner, who suggested that it would be an easy shop to rob, and it was him who grabbed the weapon.

‘Her view is that they are equally responsible and she fully accepts that, regardless of how she got there, she willingly went into the shop and did what she did. She is appalled with what she did. She doesn’t know why she behaved the way she did, and her record is not of one who commits crimes against innocent members of the public. She is horrified at what she did.

For Turner, Janet Ironfield said: ‘He has no previous convictions for robbery and there has been expression of remorse. He wishes for me to explain that he is sorry to the court and to the complainants. He is very sorry for what he did to them and the affect it has had on them.

‘Ashley Turner does not seek to shift the blame onto his co-accused, but he has no recollection that this was his idea. It’s not his recollection that it was her idea either, he just cannot remember. His role was to hold open the door to provide their exit, but he was not seeking to block the exit of any other customers. This offence was out of character for him.

‘It is to be accepted on behalf of Ashley Turner that there has been domestic abuse towards his co-accused – however that appears to have gone both ways. He accepts that the relationship is toxic.’ 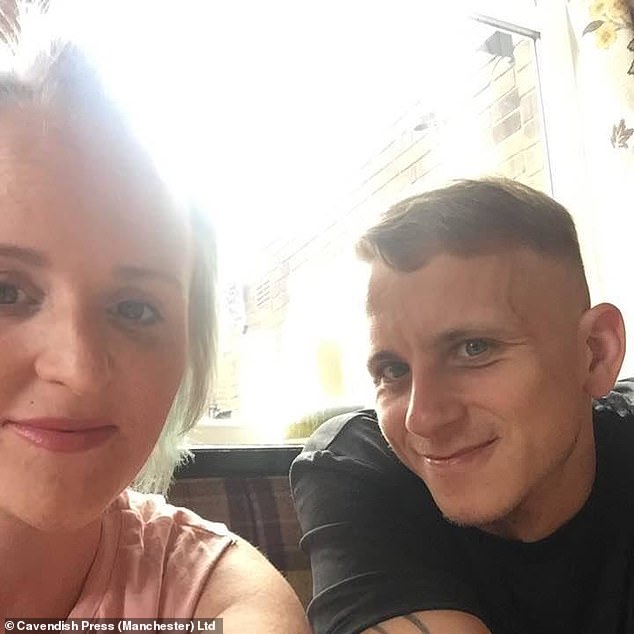 At Preston Crown Court the couple, both from Blackpool stood side-by-side in the dock as they pleaded guilty to robbery

Sentencing Judge Graham Knowles QC said the meat cleaver was ‘frightening and substantial’ and added: ‘Mr and Mrs Evans ran that store for 15 years, felt safe and secure in running it and were planning to run it for some time to come before they retired. But she describes herself as being vulnerable and anxious since this incident. It has destroyed her trust in her customers.

‘Lee Evans described the incident as ‘deeply upsetting.’ His business has lost out financially as a result of your actions. The real problem is their lack of trust in people now, and Mr Evans explains thinking about when that meat cleaver was near his face and when that woman was shouting ‘give me the f***ing money.’ Now, they want to retire and get out of the business significantly earlier than they had initially decided to.’