By now, the technique should be grimly familiar. Someone sees something they dislike and decides that it is offensive, preferably to a fashionable minority group. An edited version of the incident is put on social media, taken out of context in order to make the "culprit" – safest if it's a member of an unfashionable "privileged" group – look as terrible as possible. A few people ask whether this is a fair reflection of reality, whether the vitriol is deserved. It hardly matters. The intimidation has begun, the individual has been named, his reputation is in tatters, and perhaps even the police have turned up to investigate whether a "non-crime hate incident" has taken place. 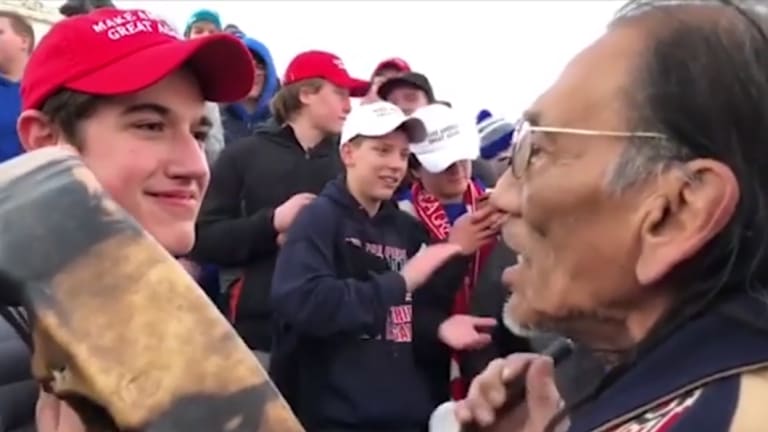 The image that went viral, but didn’t tell the whole truth.Credit:Twitter

Most victims of this unjust process give in and apologise: whatever the truth of the matter, better a quiet life than fight the many-headed monster of social justice web warriors, ultra-liberal academics and their allies in the media. The effect is censorship by fear. A bullying Left doesn't need to change any minds, just make it too toxic for anyone to disagree with them.

But last week, something changed. A group of boys from a Catholic high school in Covington, in the US, looked as if they would be subjected to a textbook example of the above process. A Native American activist, Nathan Phillips, was apparently harassed by the boys, who were wearing Make America Great Again hats at a rally in Washington. An image went viral on the internet of one boy smiling – or "smirking" – at Mr Phillips, in an "aggressive encounter". Credulous pundits damned the boy as the typical, arrogant racist American male and he was named on social media. He was guilty not because they knew definitively what he had done, but because of what he apparently represented, an almost medieval form of punishment by group association.

Usually it all would have ended here, with the boy apologising. But subsequent video footage put a very different complexion on events. Before the incident with Mr Phillips, the schoolboys had been subjected to horrific abuse from a separate group of protesters. Mr Phillips had wandered right into their midst, banging a drum. Yes, it was all highly charged, but the boy's "aggressive" smirk was more likely a bemused smile from a teenager put into a bizarre situation. Those who built him up into the archetypal racist, bullying white American may now even be sued for their wild mischaracterisation of what happened and for nearly ruining his life.

I hope they will be, because something must be done to make people think twice about piling into these confected storms. It is incredible that, even now, some of the Twitter bullies are refusing to apologise, even though they know their original accusations against the schoolboy were false. In such circumstances, no individual can reasonably be expected to stand alone against the combined might of the social media outrage machine. Everything is off balance: it's become too hard to defend yourself and too easy to accuse, and easiest of all for the activist Left to spin a fact-free narrative that destroys reputations and feeds their agenda.