Five hundred people are now allowed to march in political protests in NSW, following concerns that the hard policing of some outdoor demonstrations had been out of step with other loosened restrictions.

The Public Health Order was updated on Friday to extend the number of people allowed to protest outdoors, which was previously 20, provided the organiser has a COVID-19 safety plan and groups abide by the four-square-metre rule. 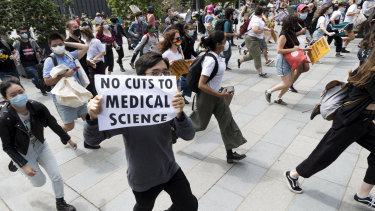 University protests have been met with a particularly heavy-handed police response. NSW Police say those protests can now go ahead under the relaxed restrictions.Credit:Rhett Wyman

It comes as NSW recorded no new locally transmitted cases of COVID-19 in the most recent 24-hour reporting period, and seven cases were detected in overseas travellers in hotel quarantine.

The relaxed restrictions will make way for protests to go ahead without meeting a heavy-handed police response, which was widely condemned earlier this month when students and staff were pushed to the ground during a University of Sydney demonstration against changes in the higher education sector.

Victoria’s health department has moved in the past 48 hours to tighten school community contact tracing in a bid to avoid a repeat of this week's communication breakdown that led a student, who should have been in quarantine, going to school while infected with the coronavirus.

East Preston Islamic College principal Ekrem Ozyurek said the year 5 boy was at school on Monday and Tuesday because of a misunderstanding with the boy's family. 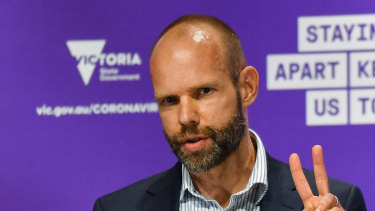 The boy's attendance while potentially infectious sparked the closure of that school and Dallas Brooks Primary School and has put about 800 people into isolation, including 83 families.

Victoria recorded just one new coronavirus case on Friday and no deaths. Premier Daniel Andrews confirmed the new case was a parent of another student at East Preston Islamic College.

Progress on bringing Australians home offset by others joining waitlist

Prime Minister Scott Morrison is still hoping to bring more than 20,000 Australians home by Christmas but progress made in helping those stranded overseas has been more than offset by new additions to the list.

He is counting on Victoria soon taking international flights again to help clear the backlog. 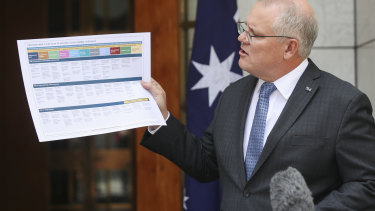 Prime Minister Scott Morrison and the national cabinet, barring Western Australia, have agreed to a plan that aims to reopen the economy by Christmas.Credit:Alex Ellinghausen

All states except Western Australia endorsed a plan at national cabinet on Friday that aims to reopen the country domestically by Christmas, provided robust contact tracing and coronavirus testing are in place.

"Certainly, seven out of the eight states and territories will be open and that will be a great day for Australia. You never know, it might be eight," Mr Morrison said.

G'day everyone! It's Roy Ward here and I'm fronting up once again for today's COVID-19 live blog.

In Victoria, we are nervously awaiting today's COVID-19 case numbers in hope we have another day with just a couple of new cases or even a 'zero-day' while AFL fans are awaiting tonight's historic AFL Grand Final at the Gabba in Brisbane which will see Richmond take on Geelong.

The big game was forced from Melbourne by the second wave of the pandemic.

So there is much to cover today as we also chase more information on the Australian Government's plans to bring home as many as 20,000 ex-pats from overseas by Christmas and it's new aim to have all borders, except Western Australia, open by then so families can potentially reunite for the holidays.

Enjoy the day to come.