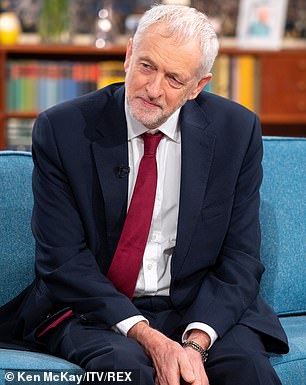 Mr Corbyn said that should there be no general election, all options should be open – including a second referendum [File photo]

Jeremy Corbyn has given his clearest indication yet that Labour is moving towards backing a second referendum.

Writing for the Guardian, the Labour leader said ‘all options should be on the table’ in the event Theresa May’s Brexit deal is voted down next week.

He said that if the deal was defeated, the Government will have lost its majority in Parliament and its ability to govern.

Labour’s line until now has been to call for a general election to break the deadlock so they could try to negotiate Brexit.

But Mr Corbyn said that should there be no general election, all options should be open – including a second referendum.

‘In the past, a defeat of such seriousness as May now faces would have meant an automatic election. But if under the current rules we cannot get an election, all options must be on the table,’ he said.

‘Those should include Labour’s alternative and, as our conference decided in September, the option of campaigning for a public vote to break the deadlock.’ 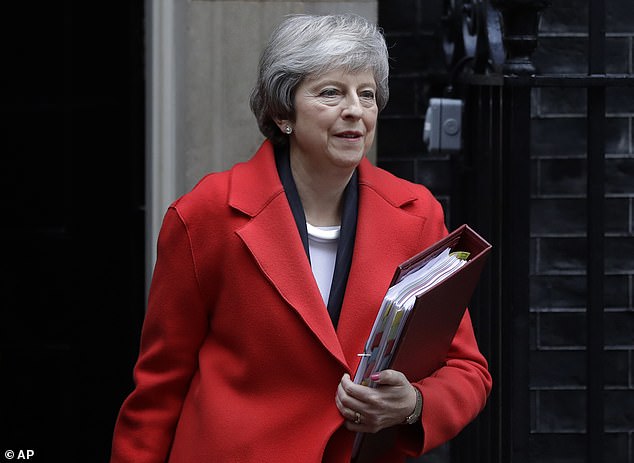 Theresa May’s deal could be voted down in the Commons on December 11. Corbyn said that if the deal was defeated, the Government will have lost its majority in Parliament and its ability to govern

His words echo those of shadow chancellor John McDonnell who has suggested it is ‘inevitable’ another EU referendum will be called if Labour are not able to force a general election.

An election remains Labour’s preferred option if – as is widely expected – MPs vote down Theresa May’s Brexit deal on 11 December,’ he said.

But he acknowledged that forcing an election would be ‘very difficult’ and, if it was not possible, he said the party would push for another referendum.

Asked by political editor Laura Kuenssberg if a vote of no confidence did not bring down the government and lead to a general election, a second referendum was ‘inevitable’, Mr McDonnell replied: ‘That’s right.’ 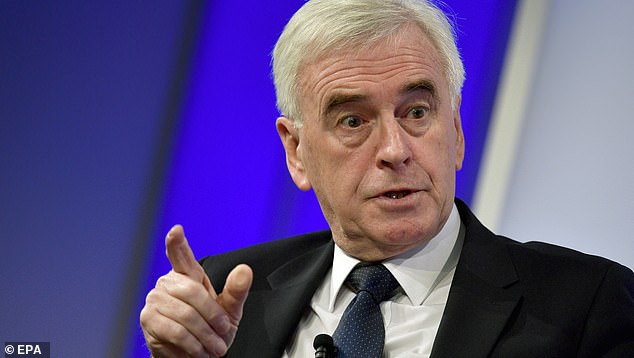 Labour has also faced crippling divisions on Brexit as its leadership’s Eurosceptic outlook differs from that of its young, city-dwelling members.

Momentum, the group that propelled Mr Corbyn to power, backs a second referendum and remaining in the EU.

But the Labour union old guard, which provides most of the party’s funding, back Brexit, with many of its members from working class northern towns.

Earlier this week it emerged that Unite boss Len McCluskey has been warning Labour MPs that their voters would see another referendum as a betrayal.

The general secretary of the country’s biggest union, a close ally of Mr Corbyn, has urged against asking the country again.

‘To suggest it represents a ‘betrayal’ grossly distorts Labour’s position and is deeply unhelpful to those seeking a solution to an issue that is reaching crisis proportions,’ he told the Guardian.

Meanwhile, Tony Blair yesterday predicted again that if Mrs May’s deal is voted down next week, there will be no majority of MPs backing any option.

This, he said, would mean that the decision would have to be put back in the hands of the public in a second referendum. 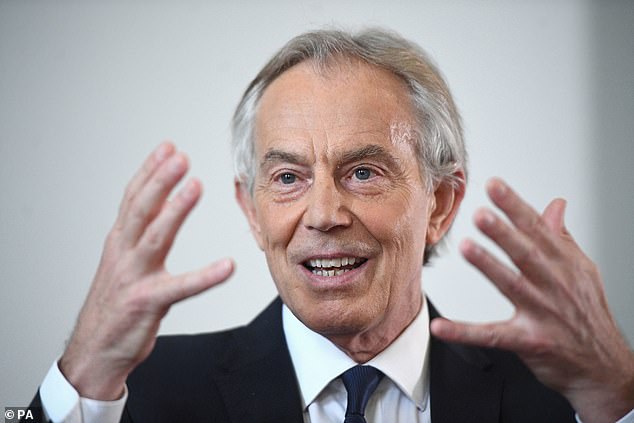 Tony Blair said Mrs May faced the prospect of ‘hitting a brick wall at speed’ in her vote on December 11. He claimed if the deal is voted down, there will be no majority of MPs backing any option [File photo]

On the ballot paper for a re-run poll should be the choice of remaining in the EU, possibly with concessions on immigration and free movement if these could be obtained from Brussels, and the kind of hard Brexit favoured by those he termed ‘proper Brexiteers’.

Speaking at a Westminster lunch, the former Labour leader said Mrs May faced the prospect of ‘hitting a brick wall at speed’ in the December 11 ‘meaningful vote’.

Dozens of Tory MPs are being warned they could lose their seats if they oppose Theresa May’s Brexit deal, it emerged yesterday.

They are being issued with private polling, commissioned by the party, which suggests Conservatives could lose 7 per cent of their support if they help block the deal.

A Tory research note about the polling, and obtained by the Daily Mail, concludes: ‘Current research shows our vote is holding (up). But the implied impact of this research on seats suggests that MPs voting against the deal could lead to significantly reduced or lost majorities in Conservative seats.’

The research is now being used to put pressure on mutinous MPs threatening to vote down the deal next week.

At the last election 70 Conservative MPs won their seats with majorities of less than 7 per cent. Those on the danger list include prominent MPs who have vowed to vote against the deal such as Zac Goldsmith, Theresa Villiers, Anna Soubry, Justine Greening and Iain Duncan Smith.

The poll, conducted this month, found Tory voters back Mrs May’s deal by 9 per cent.

Asked if she should call the vote off, Mr Blair said: ‘Personally, I don’t see what the point is in going down to a huge defeat.

‘But I think that’s a second-order question. The real issue is, is she prepared to work to see what is a compromise that has parliamentary approval?

‘My belief is that when that process goes through, she will find that there isn’t one. And if there isn’t one, that’s when my solution becomes more acceptable.’

Although a second referendum with Remain on the ballot paper seemed improbable, it provides the only solution if all Brexit options prove impossible in a deeply-divided Parliament, he said. 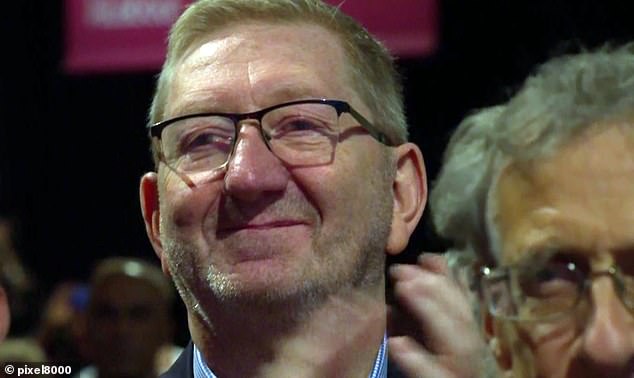 Unite boss Len McCluskey has been warning Labour MPs that their voters would see another referendum as a betrayal. The general secretary of the country’s biggest union, a close ally of Mr Corbyn, has urged against asking the country again [File photo]

At the Labour party conference in Liverpool in September, delegates have approved a motion that would keep all options – including a fresh referendum – on the table if MPs are deadlocked over Brexit.

It was passed by a show of hands at the party conference. The vast majority were in favour of the motion, with only a small number against.

Leader Jeremy Corbyn – who has previously ruled out another EU referendum – has said he will respect the result of the vote.

But he has never expressly said it is an option that should be on the table.

However, Labour insisted his quotes did not signal a change in position.

Tens of thousands of expat pensioners could flood back to Britain in the event of a no-deal Brexit, placing huge pressure on the NHS.

The 800,000 Britons who live in the rest of the EU face ‘uncertainty’ if Parliament refuses to accept Theresa May’s deal, a report prepared for ministers reveals.

A quarter of them are pensioners, and if they return to the UK, they would be entitled to free healthcare.

With 60,000 UK nationals on the continent under the age of 15, thousands of school places would also have to be found for returning children.

And an influx of expats could also worsen Britain’s housing crisis.

The warnings are contained in a document published by the Department for Exiting the European Union yesterday.

If UK nationals ‘were unable to continue to live their lives as they do now in a “no deal” scenario and returned to the UK to live’, the Government would have to take a number of steps, it states.

The report said the Government is doing all it could to secure a deal. But if that is not possible ministers would appeal to EU governments to allow Britons to stay.