The protests began as a way to voice anger over the rise in diesel tax but have since come to encompass people’s frustration with the growing cost of living.

Numbers were significantly down, however, with around 33,500 people attending protests across France, according to the country’s interior ministry. This is about half the number seen last weekend.

Security services had called for protesters to stay at home, as they prepared to focus on safety elsewhere after a shooting at Strasbourg’s Christmas market that killed four people.

Numbers may also have been affected by the weather, which was cold and rainy. 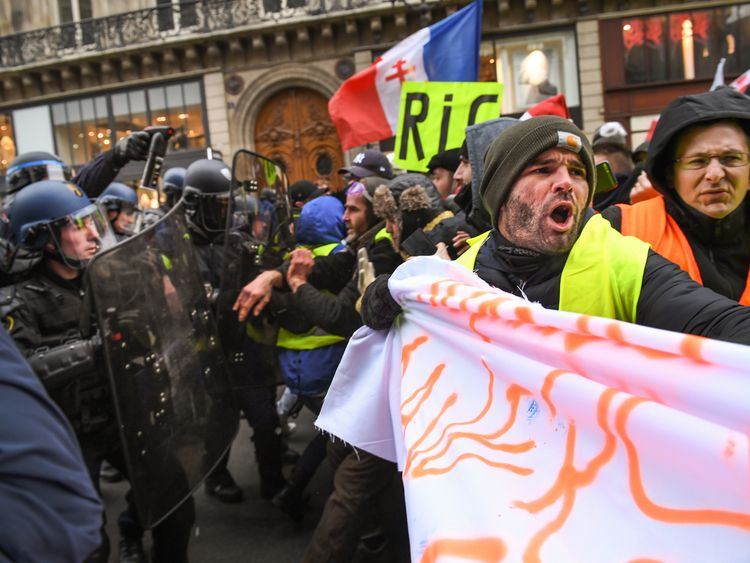 Protests in Paris were noticeably smaller, with reports saying there were around 2,200 protesters on the capital’s streets compared with 10,000 last week.

The interior minister said around 69,000 police were active across France on Saturday.

Police said there were still 148 arrests and small pockets of violence were reported. Police used tear gas and water cannons in the afternoon to move groups of protesters on the Champs-Elysees and adjacent streets.

And the cold weather was not enough to stop a group of feminists from going topless as they faced off with security forces near the Elysee Palace, the president’s residence.

There were also clashes reported in Nantes, western France, and the southern city of Bordeaux.

One protester, Pierre Lamy, a 27-year-old industrial worker, said: “We’re here to represent all our friends and members of our family who can’t come to protest, or because they’re scared.

“Everything’s coming up now,” he said. “We’re being bled dry.”

French President Emmanuel Macron had called for calm on Friday and the French government had said on its Twitter account: “Protesting is not smashing our heritage.

Previous weekends of protests had led to widespread vandalism, looting and violence.

Seven people have died overall, the latest in an accident resulting from a blockade by protesters on Friday.

The government has responded by cancelling the fuel duty rise and this week Mr Macron bowed to protesters’ demands by announcing a rise in the minimum wage by $100 (£90 a month).

The “yellow vest” movement started in November following a social media campaign which urged people to protest wearing the vests that must be carried in every vehicle in France.