City worker, 44, and her handyman lover, 45, who shook their four-week-old daughter to death are jailed for 17 years in total

A £90,000-a-year City worker who blamed her lover for the death of their miracle IVF baby was blasted as a ‘consummate actress’ today (Fri) as the couple were jailed for a total of 17 years.

But they had blamed each other during the trial and as they were led down to the cells upon conviction, Sanders screamed at the father: ‘You killed her.’

As Vaitkevicius was jailed for nine years and Sanders for eight, the father’s lawyer said Sanders’ tears were all part of a cover-up to hide her responsibility.

The financial consultant knew Eva had been terribly injured in the days before she died and used her phone to search for ‘shaken baby syndrome.’

Sanders sat was stony faced in the dock as Bernie Saunders, QC, said she was ‘the only candidate for being the killer’ the father had played a lesser role as ‘allower’ of the death. 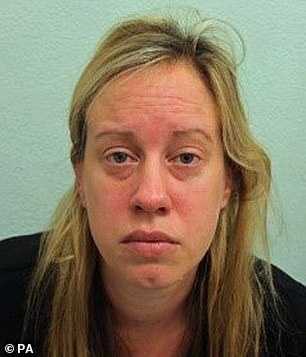 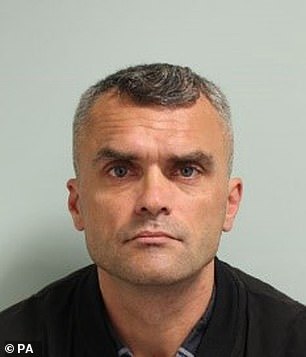 Clare Sanders, 44, and Tomas Vaitkevicius, 45, were jailed for 17 years today over the death

The defence barrister said Sanders had staged dramatic outbursts of emotion in court ‘for the benefit’ of the judge and to control the narrative.

He told the court: ‘We say she was a consummate actress and we repeat the point we make about her controlling the narrative, including we say for your benefit that she left court upon her conviction screaming at Mr Vaitkevicius: “You killed her”.’

Sanders described Eva as her ‘miracle baby’ after being told she was likely unable to have children during IVF treatment years before.

Neighbours called emergency services after hearing the mother screaming: ‘My baby, my baby’ on the night of September 1, 2017.

Eva was rushed to hospital where medics battled to save her life but was pronounced dead shortly before 7am the following day.

A post-mortem revealed she had suffered 27 rib fractures and gave the cause of death as ‘traumatic brain and spinal cord injury.’

The injuries were so severe they were likened to those sustained in a car crash or a fall from a multi-storey building.

The couple have now separated and tried to pin the killing on each other in a ruthless ‘cut throat’ defence. 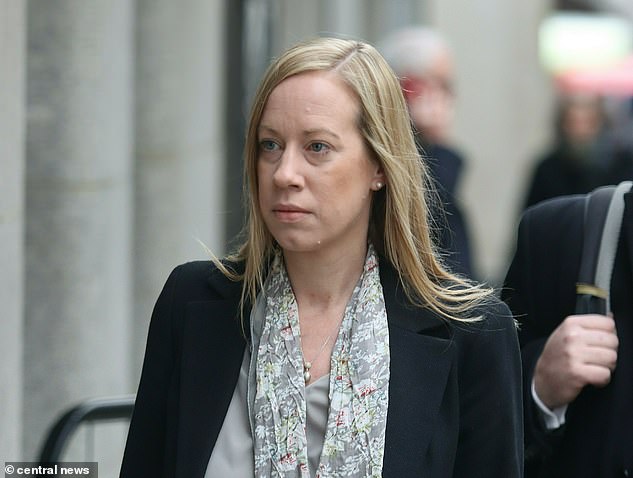 They were both heavy drinkers with Sanders downing at least three bottles of wine a day, the Old Bailey heard.

The jury deliberated for 26 hours and 54 minutes before convicting them both by majority of causing or allowing the death of a child.

The pair met when Sanders hired Vaitkevicius to renovate her bathroom while he was still with his ex-wife and she was divorcing her ex-husband.

They shared a poisonous relationship marked by furious rows in which Vaitkevicius would storm out of the luxury £500,000 apartment in Renshaw Corner, Mitcham, south London.

Sanders ‘distanced’ herself from her daughter and left the baby in her bed alone when she got frustrated with her.

On the night of August 31 neighbour Karen Drewell told how she ran downstairs and saw Vaitkevicius giving Eva the ‘kiss of life’ on a bed after she was awoken by frantic Sanders screaming: ‘My baby.’

Ms Drewell left the flat in Mitcham to call an ambulance and then returned to the bedroom to see baby in her mother’s arms. 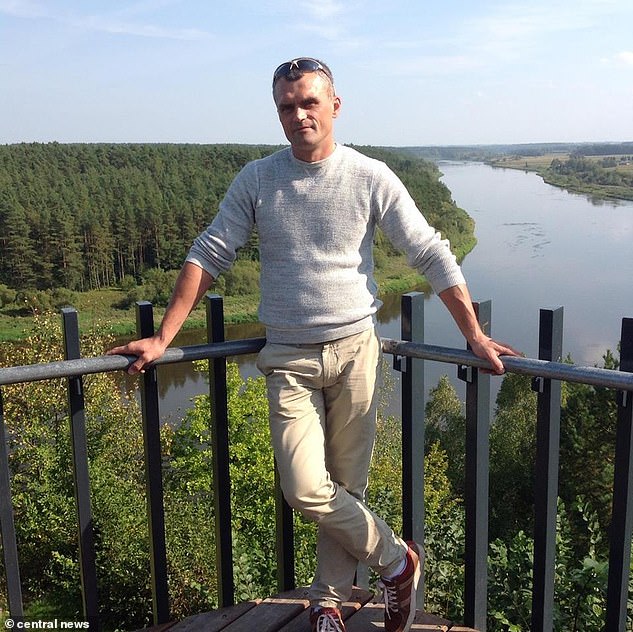 Sanders, who left her £90,000-a-year job before Eva was born, was described as being manipulative and controlling, while Vaitkevicius, (pic) who had convictions for violence, admitted he could be aggressive

She told jurors: ‘The image is in my mind forever, of that grey baby in Clare’s arms.

‘As I walked back into the bedroom Clare was holding the baby and the baby’s face was grey and she was screaming.

‘She had her arms around Eva’s arms and round her chest. The baby’s face was facing outwards.

‘She was saying to Tomas that he had killed the baby by not bringing up her milk.’

Ms Drewell and her father listened to paramedics after calling 999 and were told to use two fingers to try and revive the baby’s heart and to place her on the floor.

When paramedics arrived they took over and rushed Eva to St George’s Hospital, Tooting.

While the infant was being treated Sanders was approached by a police officer and said: ‘You’re looking to prosecute me, and I am losing my child, we just having a drink to celebrate’.

The parents appeared in the dock for sentence at the Old Bailey today (fri), both smartly dressed in black suits.

Mr Richmond said: ‘My submission is that in terms of where you go, where you can say that you have to reject being the causer, there must then be a distinction between causer and allower,’ Mr Richmond said in mitigation.

‘The only candidate for being the killer is the other defendant, there isn’t a pool. Realistically one has to look at it with that background.

‘One of the main reasons for his inability to protect Eva was drink. The fact of drink is something he has had many many months not drinking to address. Secondly it is clear that this was a wholly dysfunctional relationship.

‘There was in our submission a degree of zoning out that took place when Clare Sanders was angry with him or upset with him.

‘Either he’d remove himself from the premises or he’d be drinking and not paying as much attention as he should.

‘The evidence is contradictory in terms of the way he behaves. There is evidence of him being a good father with reward to his daughter.

‘The factor which seems the difference here is the frankly poisonous relationship between him and Clare Sanders.

‘What he did, faithful to the jury’s verdict, is fail to spot the signs and realise their significance. Much of that has been encapsulated in the words Job for mummy.

Sally O’Neill, defending Sanders, said the mother had been desperate for a child and ‘let her desire for a baby blind her.’

Ms O’Neill argued that the judge did not need to make a finding about ‘causing or allowing’ the death as both parents had been convicted of the same offence.

The barrister said: ‘Nobody noticed anything wrong with this baby and it’s clear she was seen by the health visitor and she was absolutely fine ten days before this happened.

‘Whatever happened to her happened after Mr Vaitkevicius returned to live and be present in her life over that ten-day period.

‘They were both acquitted of murder and the jury convicted them both on this defence, which is one that means my Lord doesn’t need to make a finding as to causing or allowing, as the jury didn’t.’

‘All the negative sides [of Sanders] were made great play of for the jury.

‘What is clear is that Ms Sanders wasn’t just under stress, but she was actually quite vulnerable, the time in her life, that she desperately wanted a baby… It may be that she let her desire for a baby blind her to things which were going obviously wrong.

‘She was vulnerable to the men in her life.

‘[Eva’s death] is something she will carry to her grave with her.’

Passing sentence, Recorder of London Judge Mark Lucraft QC said: ‘On Friday 13 November you were convicted of causing or allowing the death of your baby daughter Eva.

‘She was just four weeks old when she died.

‘It is clear from all the evidence in her very short life she had been subjected to a number of violent assaults which had caused significant injury to her.

‘What was viewed by the two of you as a bit of fun by you was to change when Clare Sanders became pregnant.

‘When you discovered the pregnancy you went on described Eva as your “miracle baby” having undergone IVF some years before and being told you were unlikely to be a mother.

‘It is clear on the evidence you were both very heavy drinkers. While there might have been some respite as far as you, Sanders, were concerned during the pregnancy, you Vaitkevicius continued to drink a lot.

‘Before and after Eva’s birth there were constant disagreements between you.. Quite what the trigger was for the injustice to Eva, only you really know.

‘You both gave accounts of caring for Eva… But neither of you have admitted to doing anything to harm this little baby, or having any concerns or suspicions of what the other was doing.

‘Eva was in the midst of your toxic relationship. It is clear she was subjected to several events of violent trauma… I have placed this case in the high culpability category.

‘The distinction [in sentence] is to reflect your previous good character.’

The City worker claimed in her evidence that she was ‘hyper-vigilant’ with childcare but accepted that the baby may have sustained a head injury while she was changing her.

‘She arched back… Onto the soft changing mat,’ Sanders said when questioned about how Eva could have hit her head if she had been holding her safely..’

Sanders said Vaitkevicius had been feeding Eva on the night she suffered her fatal injuries.

‘I think he went back into the lounge,’ she told the court.

‘I went to check the baby and she looked lifeless. I scooped her up and screamed.

‘She was lying on her back. She just seemed lifeless. She had milk coming out of her nose and mouth. Her head just slumped forward. I just picked her up and screamed.’

Sanders said she had searched ‘shaking baby’ because her daughter had suffered from tremors.

Vaitkevicius told jurors he had been delighted at the prospect of having a baby despite his bitter feelings towards the mother.

He said the relationship began when he turned up on her doorstep with nowhere else to stay after doing building work for her.

‘She was angry with everyone, with the whole world and I didn’t know how to please her,’ Vaitkevicius said.

The handyman claimed he had always loved his daughter, saying: ‘I always loved her but it wasn’t always possible for me to be with her.’

He said on the night his daughter suffered her fatal injuries he had nipped out into the garden for a cigarette.

‘Then I rolled my cigarette and went to the garden. I go in,’ he said.

Vaitkevicius said it was then Sanders started screaming

‘She was standing, shouting, like calling for help but loudly,’ he said.

Both claimed they had no idea how Eva had sustained her fatal injuries.

In July last year the financial consultant had her bail conditions altered so she could visit friends in the city of London.

Then in October she was granted another variation so that she could rent out her home on Airbnb while she stayed at a luxury renovated oasthouse in Wadhurst, East Sussex.

Sanders had her bail changed a third time in May, allowing her to fly abroad to Northern Ireland and stay with her stepmother during the first coronavirus lockdown.

The court heard today (fri) that she now spends 23 and a half hours a day in her cell at HMP Bronzefield prohibited from having ‘social visits’ due to the pandemic.

Sanders and Vaitkevicius, both of Mitcham, south London, denied but were convicted of causing or allowing the death of a child.