The urge to celebrate Christmas appears to have overruled the COVID-19 stay at home advice for the northern beaches residents at the Westfield Warringah Mall Shopping Centre where people were sitting and eating at cafes and shopping.

There were "many people" not observing social distancing, readers told the Herald . However most shoppers were wearing masks. 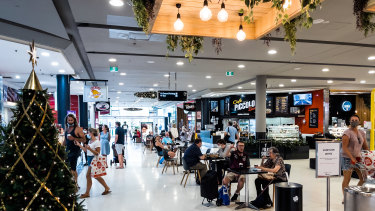 Westfield Warringah Mall on Christmas Eve, is much busier than it was earlier in the week.

The NSW Health rules for the northern beaches, outlined here, say that all food and drinks sold at shopping centres are meant to be offered as strictly takeaway items.

NSW police told the Herald that they were regularly patrolling the centre and were told that cleaners had put tables and chairs out "in error" this morning and they had since been put away.

"No PINs have been issued within the Northern Beaches Police Area Command at this stage," a NSW police spokeswoman said. "The seating was put out by Centre Management security in error and have since been packed away." 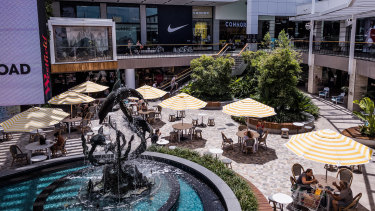 Westfield Warringah Mall was much busier on Thursday than earlier in the week and despite stay at home orders many people were seen lounging at cafes and shopping for non-essential items.

"Take away food service is permitted by our food court operators and seating is only provided for customer convenience and not for the consumption of food," she said.

"Our customer experience team have been asking customers to move on."

Additional signage will be provided and Westfield will "work with retail partners to remind them of their COVIDSafe Protocol obligations", the spokeswoman added.

A spokesman for SafeWork NSW said they "will make enquiries with the management of the shopping centre".

Herald readers were divided on whether people were doing the right thing at the mall saying that the stay at home rule "is advice, not an order."

"If shops are open people will shop there," one wrote.

"We went around 11.30am and about 15 per cent of people were not wearing masks," one lady wrote.

"A lot of people were sitting in the lounges and eating whilst sitting down. Nobody was enforcing the rules regarding take away."

Another wrote: "People have understandably been misled into believing that COVID-19 is rife across the whole of the northern beaches. The scope and breadth of the lockdown to the whole of the Northern Beaches was a mistake, as was the political decision to do so and to communicate it nationally as a “Northern Beaches” cluster."

Another wrote: "Not into the shame and blame games, so popular in this pandemic, but really! Cafes in the lockdown zone should not even open."

At the end of each day, we’ll send you the most important breaking news headlines, evening entertainment ideas and a long read to enjoy.  Sign up to The Sydney Morning Herald’s newsletter here, The Age’s here, Brisbane Times’ here, and WAtoday’s here.