A Chinese teacher has come up with an unconventional technique to help her pupils maintain good postures – by making them hold books with their heads while sitting in class.

Footage shows the children, each with a textbook laying on top of their heads, working in the classroom in Nanyang of central Chinese province Henan.

Trying to keep the books from falling can prevent the students from slouching while writing and reading, the teacher told local media. 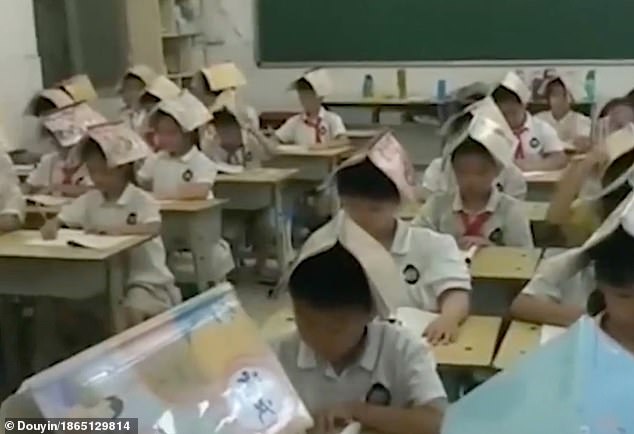 The technique apparently is not so uncommon among schools in China.

Another primary school in Jiangsu, east China, adopted the same method after some of their students developed short-sightedness due to bad sitting positions.

Short-sightedness is a major issue for Chinese pupils. More than half of the country’s population under the age of 18 now suffer from the condition, also known as myopia, with high school students being hit the hardest.

Figures released by CCTV show that 81 per cent of Chinese teenagers between 16 and 18 years old have the eye condition; while 14.5 per cent of six-year-olds already need to wear glasses.

The teacher in Nanyang shared the video on TikTok-like Douyin and it quickly became trending on Chinese social media.

Many web users were impressed and praised the unconventional method, while others criticised it as ‘torturing the children’.

One commenter wrote: ‘What a great idea and a great teacher! I’m going to let my kid try this. I was feeling so frustrated trying to come up a way to fix his posture.’

Another one replied: ‘This is torturing the children. Why don’t the teachers try to sit like that?’

The trending footage comes as around 280 million students across China are returning to the campus this month after the Chinese officials gave a go-ahead for most schools in the country to open again.

Xinjiang in north-west China is the only region that has ordered its students to start the school year online after seeing a surge of coronavirus cases in recent months.

Wang Dengfeng, an official leading the anti-virus efforts at the Ministry of Education, said China had achieved a decisive victory against the virus after successfully cutting large-scale transmission and resuming the country’s economy.