Berlin: Chancellor Angela Merkel and Premier Li Keqiang of China settled into the back seat of a driverless Volkswagen van, fastened their seat belts and went for a spin around a disused airport landing strip in central Berlin.

"There is nothing like seeing in practice what's possible," Merkel beamed when they returned. 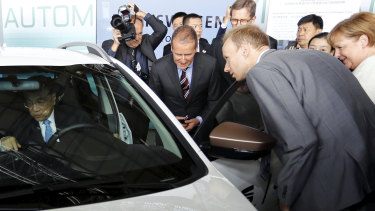 Chinese Prime Minister Li Keqiang sits in a car as he and German Chancellor Angela Merkel and Herbert Diess, Volkswagen’s CEO, attend a presentation for autonomous driving at Tempelhof airport in Berlin in 2018.Credit:AP

Eighteen months later, Germany is embroiled in a tortured debate over whether to allow Huawei to help build its 5G next generation mobile network. But with German automakers, including Audi and Daimler, already working closely with Huawei, it may be China who sits in the driver's seat.

Whatever Germany decides will shape its relations with China for years and reverberate across the Continent. It will send a powerful political signal on how united, or fractured, Europe will be in the digital age of rivalry between Washington and Beijing.

Germany, like all of Europe, is under tremendous pressure from the US government to ostracise Huawei, which fears that the Chinese company is a Trojan horse that would allow the China's government to spy on or control European and US communication networks. The pressure remains even after US President Donald Trump signed an initial trade deal with China on Wednesday. 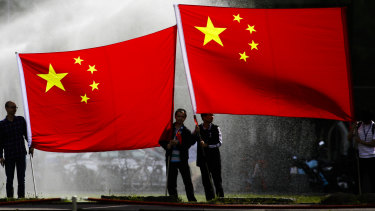 People wait for Chinese Premier Li Keqiang outside the German chancellery in Berlin in 2018.Credit:AP

"The West should have a joint solution to 5G because we view the world the same way," Richard Grenell, the US ambassador to Germany, said Thursday in an email.

But for Germany that decision is especially fraught. Relations with the Trump administration are infused with threats of tariffs against German automakers and mounting distrust that Europeans have come to believe may permanently reshape, if not rupture, a once ironclad trans-Atlantic alliance.

China, on the other hand, is elbowing its way onto the European stage as a new strategic player and an increasingly indispensable economic partner. By far the largest market in the world, it has become the biggest source of growth for Germany's main carmakers and the key to their dominance of the luxury car market.

It is a position that China has not been shy to weaponise. 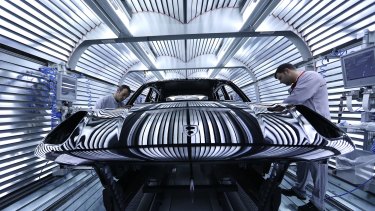 Workers perform quality checks on a Macan sports utility vehicle (SUV) in the light tunnel at the paint shop inside the Porsche Leipzig GmbH factory in Leipzig, Germany.Credit:Bloomberg

"If Germany were to make a decision that led to Huawei's exclusion from the German market, there will be consequences," Wu Ken, China's ambassador to Germany, warned last month. "The Chinese government will not stand idly by."

Konstantin von Notz, a lawmaker and member of the digital affairs committee in the German parliament, put it this way: "The Chinese have made clear that they will retaliate where it hurts: the car industry."

For months, German lawmakers have danced around the issue of whether to effectively exclude Huawei from the bidding process. The issue is expected to be debated in Parliament again in the coming weeks. As a decision approaches, Merkel has found herself caught between worried German automakers, who accompanied her on a dozen junkets to Beijing, and her own wary intelligence community.

Merkel, steward of the pro-business Christian Democratic Party, met this week with lawmakers from her party and urged them to find a solution that would settle the dispute.

Merkel is opposed to banning the Chinese company.

"It is not about individual companies, but rather security standards," the chancellor said in November. "It is about the certification we will carry out. That should be our guiding benchmark."

But a rebellion is brewing in Germany's foreign policy and intelligence community — scared of US threats to limit intelligence sharing — and even among some of the chancellor's own lawmakers, who want to submit a proposal to parliament with tougher security criteria that would, in effect, keep Huawei out.

Merkel's critics say the current certification process, which merely demands that companies sign a pledge not to spy, is inherently flawed because it relies on trust. 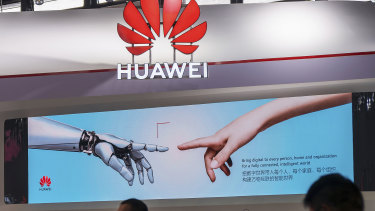 Extending its reach, and the reach of the Chinese government: Huawei.Credit:AP

At her party's annual conference in November, the chancellor's Christian Democrats disinvited Huawei as a corporate sponsor and passed a motion demanding that only companies "which demonstrably fulfil a clearly defined catalogue of safety requirements" should be allowed to bid. One key requirement would be to rule out state interference.

The motion did not name Huawei or China, but the implication was clear.

"Under Chinese law, companies are obliged to cooperate with the Chinese Secret Service," said Norbert Röttgen, a conservative lawmaker who co-wrote the motion against Merkel's Huawei policy.

"When you deal with Huawei, you also have to accept that you might be dealing with the Chinese Communist Party."

Cars that can steer themselves may make driving safer, but they also open up opportunities for government surveillance and control.

"Car companies gather loads of personal data from the drivers of their cars, and they face an enormous risk of an angry public outraged to find their data used by the Chinese Communist Party," said Grenell, the US ambassador.

Beyond fears of spying and sabotage, lawmakers warned that if Germany allowed Huawei to bid it would not just alienate Washington but also risk undermining a badly needed united European front.

"Our only hope is to stick together as Europeans," Röttgen said. That, he said, was also an argument for giving the 5G contract to European companies like Nokia or Ericsson.

Analysts say Nokia and Ericsson, which have won 5G contracts in Denmark and elsewhere, have the competence to build the 5G network, but it would take longer and cost more — not least because Huawei is already a huge part of the existing networks in Germany. Switching will be messy and costly.

Still, Röttgen said, given the scale of the new bid, if it went to Huawei, Europe risked permanently falling behind.

"If you let Huawei build a big chunk of the 5G network, after a while you won't understand your own system," he said. "It would be a maximal loss of control and sovereignty.

"Strategically it is a crystal-clear case," Röttgen said.

Others, however, say that giving the bid to Huawei may not be such a bad idea.

"If we ban Huawei, the German car industry will be pushed out of the Chinese market — and this in a situation where the American president is also threatening to punish German carmakers," said Sigmar Gabriel, a former German foreign minister and vice chancellor.

"Just because we have an American president who doesn't like alliances, we give all that up?" he said. "Why would we? Especially since he does exactly what the Chinese do and threatens the German car industry."

German automakers like Volkswagen, Daimler and BMW have continued to record sales gains in China and to take share from rivals like Ford, even as the overall market has slumped.

"See, last year, 28 million cars were sold in China; 7 million of those were German," Wu, China's ambassador to Germany, added in his remarks in December, making what many in Germany interpreted as a veiled threat.

Chinese consumer preferences, and Chinese government policies, increasingly determine what models the carmakers build and what kind of technology they develop.

Audi, the luxury car unit of Volkswagen, announced a "strategic cooperation" with Huawei on developing autonomous driving technology during Li's visit to Berlin last year. Daimler, which is 9.9 per cent owned by Chinese investor Li Shufu, uses Huawei high-performance computing. BMW and others partner with Huawei on research and development.

No car company is more closely entwined with China than Volkswagen. The company has been operating in China since the early 1980s, when the Communist government began opening to the West.

Today Volkswagen earns almost half its sales revenue in China and has 14 per cent of the Chinese car market.

"If we were to pull out" of China, Herbert Diess, chief executive of Volkswagen, told the Wolfsburger Nachrichten newspaper in December, "a day later 10,000 of our 20,000 development engineers in Germany would be out of work."

German carmakers deny that their dependence on Chinese sales has turned them into advocates for Chinese interests.

"We don't want political developments to spill over into product development," Bernhard Mattes, president of the German Association of the Automotive Industry, said in an interview in Berlin.

But Mattes conceded, "We are not operating in a politics-free space, that is clear."

Huawei has understood as much. Its German headquarters are in Bavaria, alongside BMW and Audi and many other companies deeply embedded in China. The company has been a generous sponsor of all mainstream parties, including Bavaria's governing conservatives.

Markus Söder, Bavaria's conservative leader, has publicly defended Huawei's right to bid, while also lashing out at the United States.

"To say up front that I rule it out because another partner in the world doesn't like it," he said, is "a bit of a problem."