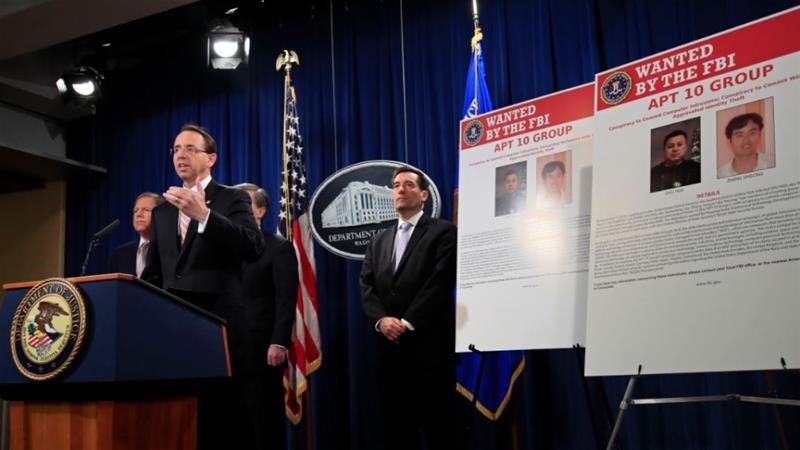 China has strongly rejected allegations from the United States and a number of its allies criticising Beijing for economic espionage, accusing Washington of “fabricating facts”.

Britain, Australia and New Zealand on Thursday joined the US in chastising China over what they called a global campaign of cyber-enabled commercial intellectual property theft, signalling growing international coordination against the practice.

The move came on the same day as US prosecutors indicted two Chinese nationals allegedly linked to their country’s spy agency on charges of stealing confidential data from government agencies and companies in the US and nearly a dozen other countries around the world.

In a statement on Friday, the Chinese foreign ministry said it resolutely opposed the allegations and called on the US to drop the charges against the two Chinese citizens, identified as Zhu Hua and Zhang Jianguo.

“The Chinese government has never participated in or supported anyone in any way in stealing trade secrets,” Chinese Foreign Ministry spokesperson Hua Chunying said, calling the accusations a “deliberate defamation” pulled “out of thin air”.

She said China has lodged a formal protest with the US over the claims and urged Washington “to immediately correct its wrong practices and stop smearing the Chinese side on cybersecurity issues”.

Tensions between Washington and Beijing are high over tit-for-tat trade tariffs and after Meng Wanzhou, chief financial officer of Chinese telecommunications giant Huawei Technologies, was arrested in Canada at the request of the US.

Meng was held in Vancouver on December 1, the same day Washington and Beijing agreed to talks amid efforts to resolve the trade dispute.

US authorities on Thursday said the two alleged hackers worked in association with China’s ministry of state security, in an operation that targeted intellectual property and corporate secrets to give Chinese companies an unfair competitive advantage.

The pair, one of whom is nicknamed “Godkiller”, is accused of breaching computer networks beginning as early as 2006 in a range of industries, including aviation and space, finance, biotechnology oil and gas, satellites and pharmaceuticals. Prosecutors say they also obtained the names, social security numbers and other personal information of more than 100,000 Navy personnel.

Zhu and Zhang were allegedly members of a hacking group known within the cybersecurity community as APT 10 and also worked for a Tianjin company Huaying Haitai Science and Technology Development Co, prosecutors said.

Hacking targets included the US Navy, the National Aeronautics and Space Administration (NASA) and companies involved in aviation, space and satellite technology, the indictment said, as well as technology firms that provide outsourced email, storage and other computing tasks, according to court documents.

Overall, prosecutors say, the alleged hackers stole “hundreds of gigabytes” of data, breaching computers of more than 45 entities in 12 states. They are not in custody and the US does not have an extradition treaty with China.

“China’s goal, simply put, is to replace the US as the world’s leading superpower and they’re using illegal methods to get there,” FBI Director Chris Wray told a news conference, adding that the companies targeted by China were a “who’s who” of US businesses.

The US Justice Department accused China of breaking a 2015 pact to curb cyber espionage for corporate purposes.

In an operation coordinated with US allies in Europe and Asia, Deputy Attorney General Rod Rosenstein said the inditement of the duo aimed to rebuff “China’s economic aggression”.

Einar Tangen, a China political analyst who advises the Chinese government on economic and development issues, said the US indictment “reads more like something from the State Department that you would expect from the Department of Justice”.

This is the latest in a series of hacking cases brought by the US government against Chinese nationals. In October, it charged Chinese intelligence officers with stealing information on a turbofan engine used in commercial jetliners.

The same month, the Justice Department arrested an alleged spy for China’s Ministry of State Security on charges of economic espionage and attempting to steal US aviation trade secrets.