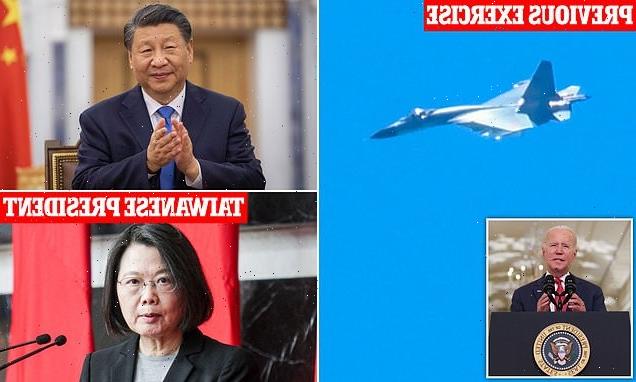 China deployed 71 warplanes to skies around Taiwan in a chilling ‘strike drill’, then blamed the US for ‘provocations’ and ‘collusion’ with self-governing island – in one of the biggest daily incursions to date.

Sixty fighter jets took part in the drills, including six Su-30 warplanes, some of China’s most advanced, Taipei’s defense ministry said in a Twitter post on Monday.

The People’s Liberation Army said it had conducted a ‘strike drill’ on Sunday in response to unspecified ‘provocations’ and ‘collusion’ between the United States and the self-ruled island.

Data from Taiwan’s defense ministry showed those drills were one of the largest since they started releasing daily tallies.

Forty-seven of the sorties crossed into the island’s air defense identification zone (ADIZ), the third-highest daily incursion on record, according to AFP’s database. 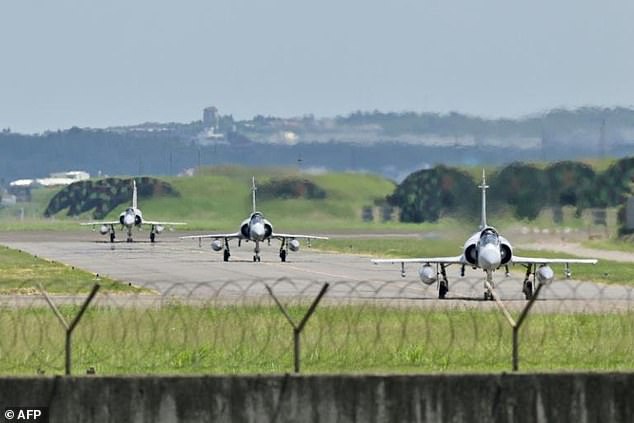 Chinese military flights into Taiwan’s ADIZ are seen as way to wear down the island’s aging fighter fleet, which includes the Mirage 2000s seen here in August 2022 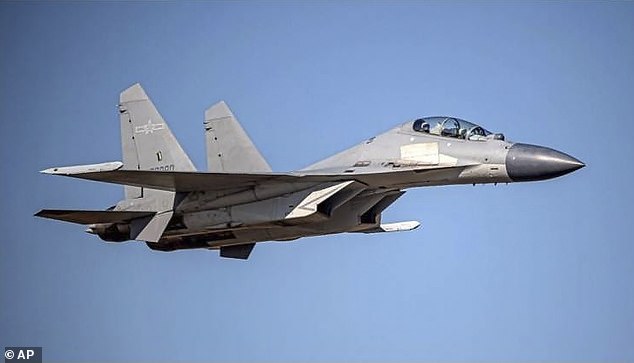 Taiwan, a self-governing democracy, lives under constant threat of invasion by China, which claims the democratic island as part of its territory, to be taken one day.

In September, President Biden went on the record and said US forces would defend Taiwan in the event of a Chinese invasion. The statement drew an angry response from China.

Biden said during a CBS 60 Minutes interview that US forces would defend Taiwan, ‘if in fact, there was an unprecedented attack,’  Reuters reported.

The President appeared to go beyond long-standing stated US policy on Taiwan. The US has stuck to a policy of ‘strategic ambiguity’ – not making clear on whether it would respond with their forces if there was an attack on Taiwan, the news outlet said.

Beijing has ramped up military, diplomatic and economic pressure on Taiwan under President Xi Jinping as relations have deteriorated.

One of the pressure tactics China has increasingly used is probing Taiwan’s ADIZ with its warplanes.

China did not specify the number of aircraft mobilized for Sunday’s exercises, nor the exact location of these maneuvers.

Taiwan’s daily tally showed most of the incursions crossed the ‘median line’ which runs down the Taiwan Strait that separates the two sides, while a smaller number went through Taiwan’s southwestern ADIZ.

They are not the same as a country’s airspace. Instead, they encompass a much wider area, in which any foreign aircraft is expected to announce itself to local aviation authorities.

Taiwan’s ADIZ is much larger than its airspace. It overlaps part of China’s ADIZ and even includes some of the mainland. 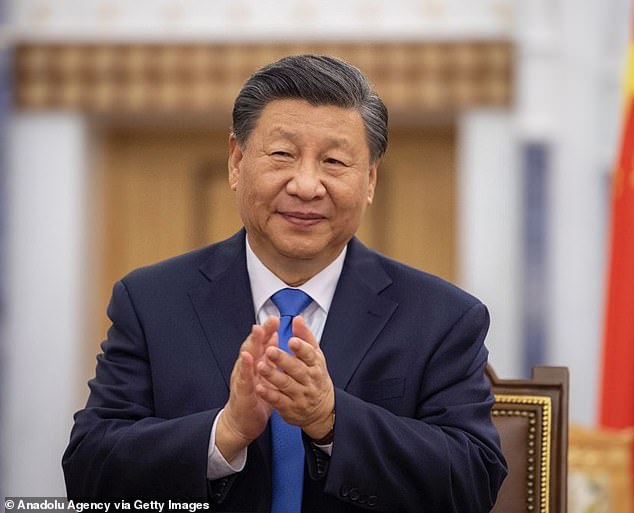 Chinese President Xi Jinpin (pictured). China deployed 71 warplanes to skies around Taiwan in a chilling ‘strike drill’ then blamed the US for ‘provocations’ and ‘collusion’ with self-governing island – in one of the biggest daily incursions to date 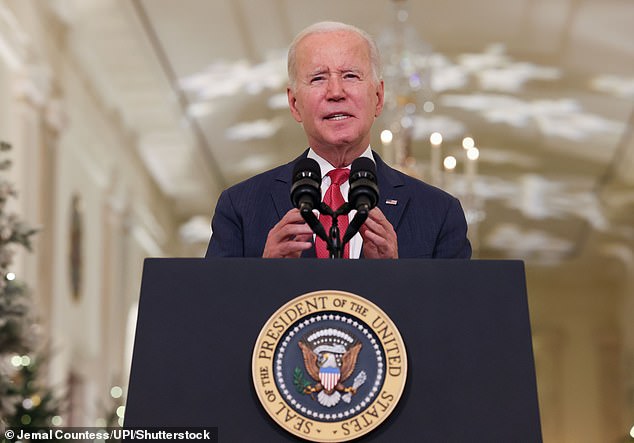 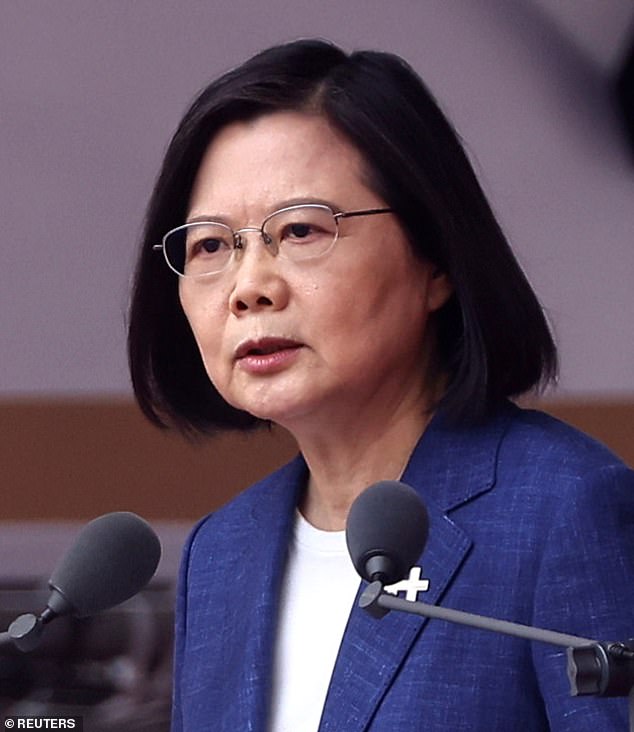 Taiwan, a self-governing democracy, lives under constant threat of invasion by China, which claims the democratic island as part of its territory, to be taken one day. President Tsai Ing-wen (pictured) speaks during the national day celebration in Taipei, Taiwan, October 10,2021

The PLA said Sunday’s exercises were ‘a firm response to the escalating collusion and provocations by the US and the Taiwanese authorities’.

Beijing has been incensed by US President Joe Biden’s handling of Taiwan — especially after he said Washington would defend it militarily if attacked by China.

The prospect of a Chinese invasion has increasingly rattled both Western nations and many of China’s neighbors.

Xi, China’s most authoritarian leader in decades, has made clear what he calls the ‘reunification’ of Taiwan cannot be passed on to future generations.

Russia’s invasion of Ukraine has also heightened fears China might try something similar.

The United States has stepped up support for Taiwan including a bill this month that authorized $10 billion in military aid, to which Beijing expressed ‘strong opposition’.

Tensions peaked in August during US House Speaker Nancy Pelosi’s trip to Taiwan, with the PLA staging huge military drills around the island in protest.

China also threatened to shoot the recently-retired House Speaker’s flight down, sparking a tense trip to Asia for the San Francisco representative.

Military flights into the ADIZ are seen as a way to both wear down Taiwan’s ageing fleet of fighters as well as probe its defensive responses.

There has also been an increase in sorties by China’s nuclear-capable H-6 bombers.

China this month sent a record 18 H-6 bombers into the southwestern ADIZ in the largest daily incursion to date. 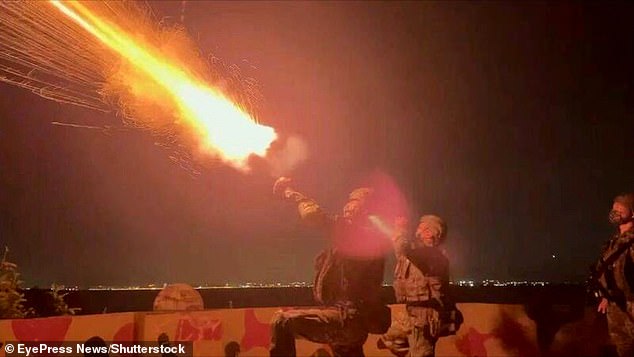 File photo of Taiwan soldiers firing warning flare at Chinese drone. Taiwan. Taiwan has fired warning shots for the first time on Tuesday Aug 30, 2022 to drive back drones that flew over its outlying islands near China 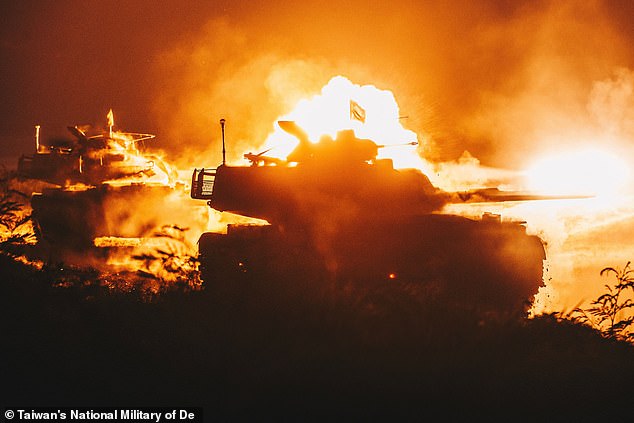 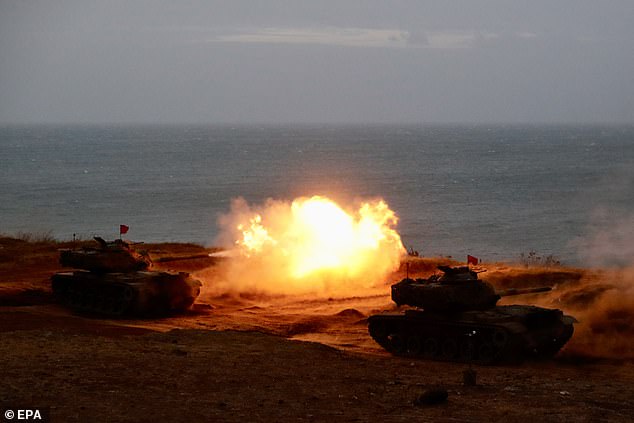