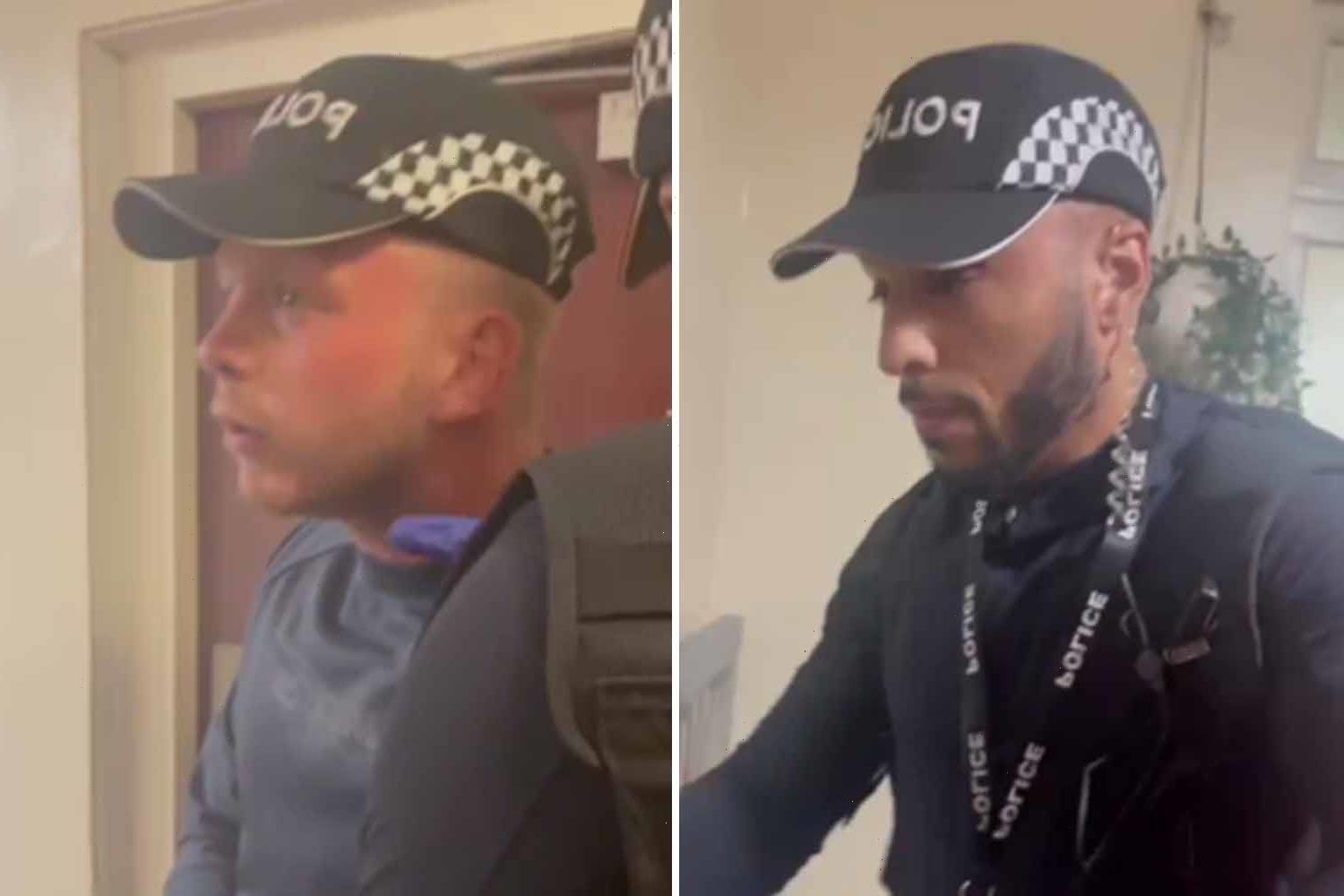 DETECTIVES have launched an investigation after two men pretending to be police officers attempted to break into a family home.

The men were dressed in crude police uniforms, including caps and lanyards, during the chilling incident in Barking, East London, on Tuesday. 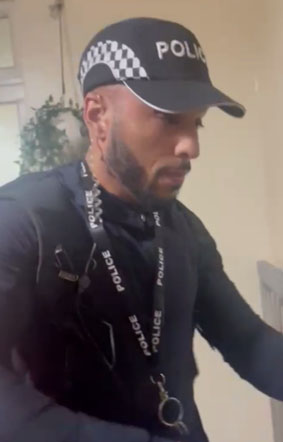 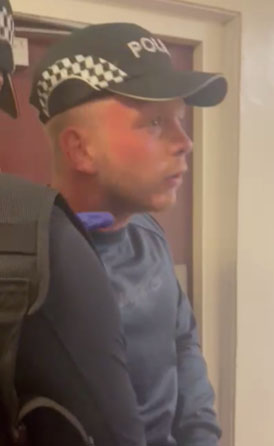 In footage posted to social media one of the men could be heard pretending to speak on a radio attached to his vest.

Both men wore caps which said ‘police’ on the side, along with donning latex gloves while also carrying handcuffs and an extendable baton.

A woman can be heard in the video demanding to see the ID of the ‘officers’ but they refused to give her any.

She then shouted “show me your face” and “you come to my house show me your ID” before one of the men appeared to lash out at her phone.

Both of the men attempt to force their way into the flat with the extendable batons, but the residents refuse them entry.

They then leave the property, with one talking into his ‘radio’ saying “bring some more in here they are aggressive.”

He then goes on to say “she is stalking me down the road” before both men sprint away from the area.

During the confrontation they accused the woman of selling cannabis, but flee when she says “I have this on camera” and “run mother***er”

She added: “Stop hiding your face if you’re the police. What is your reason to come in this house.”

Social media users were outraged by the incident, with one posting: "I bet a lot of people would just let a stranger into their home if they had a police uniform on."

Another added: "This could've ended badly for a vulnerable person. Keep vigilant especially for older members of your community."

The men’s attempt to pose as police officers comes just weeks after killer cop Wayne Couzens was jailed for murdering Sarah Everard and snatching her from the street using his police ID.

A Sun investigation also that official police identity kit is available to buy online for just a few pounds.

Replica warrant card holders are sold on Amazon and eBay, as are genuine Met badges which could be glued to them.

A spokeswoman for the Met Police said: “We are aware of a video circulating on social media filmed in east London appearing to show two men impersonating police officers.

“Police were called at 18:51hrs on Tuesday, 12 October to a residential block in The Shaftesburys, Barking IG11.

“A woman reported that two men had attended her address. They were claiming to be police officers and were dressed in crude uniform including caps, harnesses and asps (batons) said they were there to search the property.

“They were initially allowed in before the residents became suspicious and asked to see their identification, which they could not produce.

“Upon being further challenged the suspects left the address. They were followed and fled in the direction of Abbey Road.

“Officers attended and conducted an area search but the males could not be located.

They were claiming to be police officers and were dressed in crude uniform including caps, harnesses and batons

“It is not believed that anything was stolen from the address and there were no reports of any physical injuries.

“An investigation is ongoing. There have been no arrests at this time.”

Police would like to speak to the two men pictured and ask anyone who has information that could help to call 101 ref CAD 6640/12 Oct.

Information can be given anonymously to Crimestoppers on 0800 555 111 or via crimestoppers-uk.org.

Officers also urge anyone who is approached by someone claiming to be an officer to check their police warrant card.

They also encouarge members of the public to call 101 to check their identity. 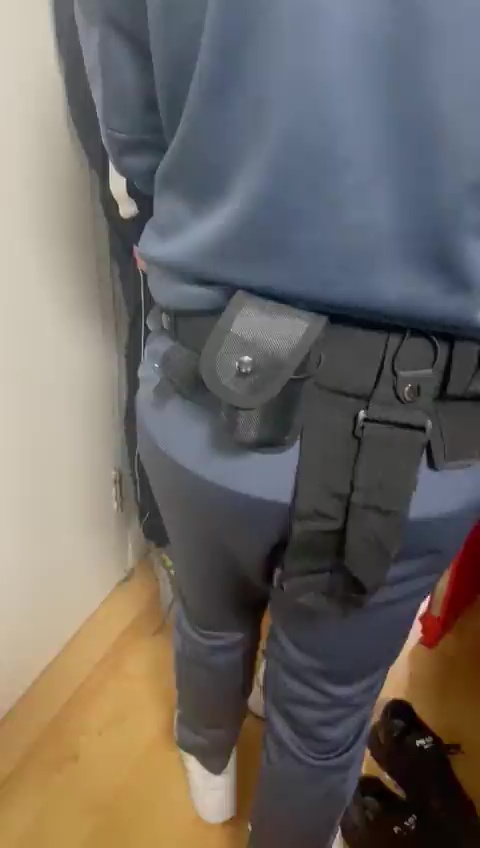 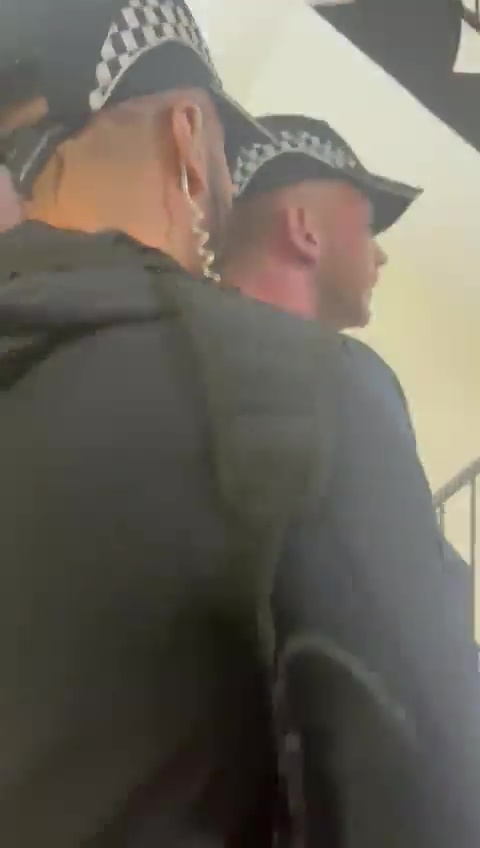 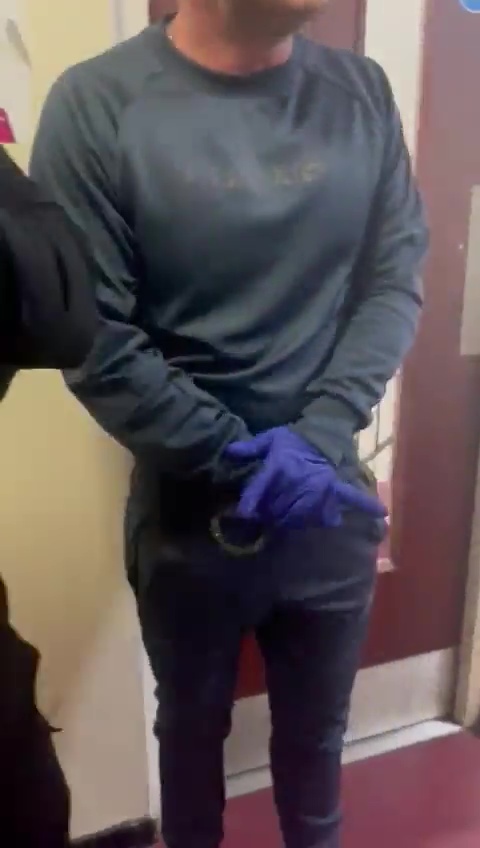