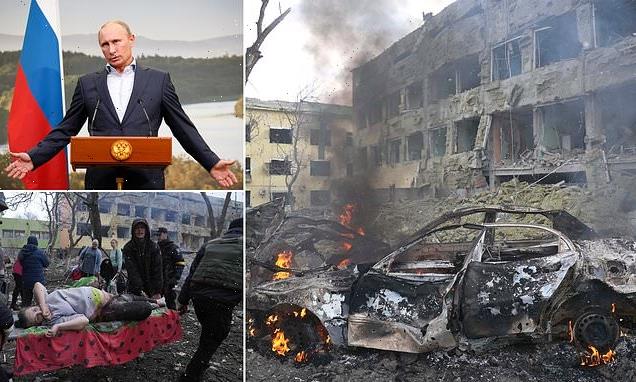 Western officials have warned of their ‘serious concern’ that Russian President Vladimir Putin could use chemical weapons in Ukraine to commit further atrocities during the invasion.

Their assessment was that an ‘utterly horrific’ attack on the capital of Kyiv could come in an effort to revive the Russian war effort which has stalled in recent days amid logistical issues, mechanical failures and a lack of fuel for their armoured vehicles.

The warnings came as Ukrainian President Volodymyr Zelensky declared a Russian missile attack had landed a ‘direct strike’ on a maternity hospital in the southern port city of Mariupol.

The hospital was decimated, with women and children feared trapped underground in what Zelensky described as ‘an atrocity’.

Foreign minister Dmytro Kuleba called it a ‘petrifying war crime’, as he pleaded for allies to supply Ukraine with aircraft.

UK Prime Minister Boris Johnson said there are ‘few things more depraved than targeting the vulnerable and defenceless, while Foreign Secretary Liz Truss described the hospital attack as ‘absolutely abhorrent’, but continued to reject Ukraine’s request for a no-fly zone to be imposed over its skies.

Residents of Mariupol were pictured on Wednesday dumping bodies into mass graves dug on the outskirts of the city in a desperate attempt to remove the dead amid the sustained Russian bombardment. 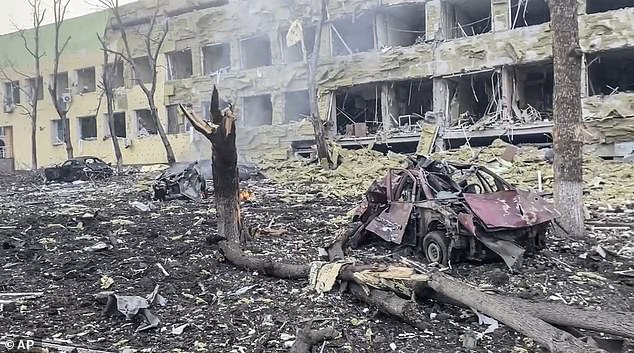 A Russian attack severely damaged the children’s hospital and maternity ward in the besieged port city of Mariupol, Ukrainian officials said. President Volodymyr Zelenskyy wrote on Twitter that there were ‘people, children under the wreckage’ of the hospital and called the strike an ‘atrocity.’ 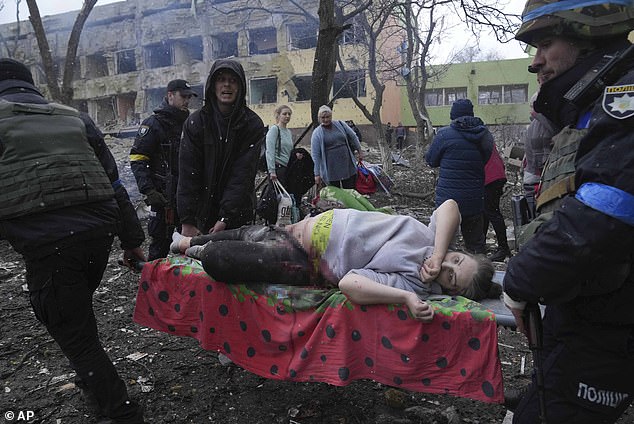 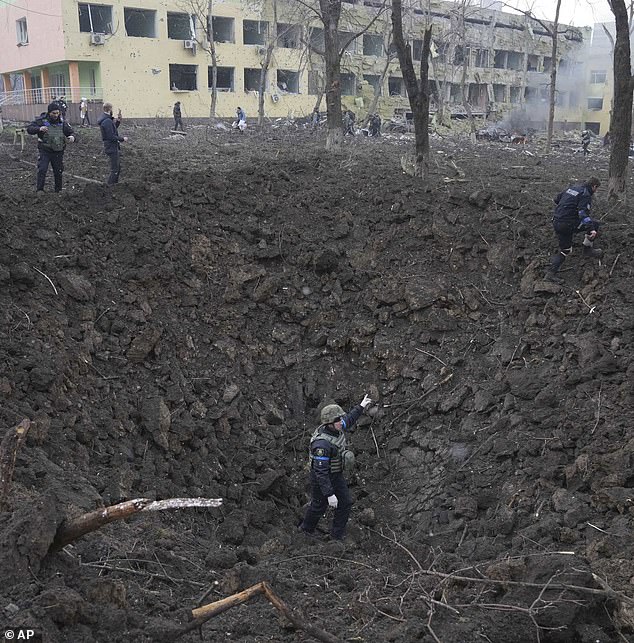 A Ukrainian soldier examines a huge crater caused by one of the Russian rockets, which fell just in front of a hospital building at the maternity hospital in Mariupol 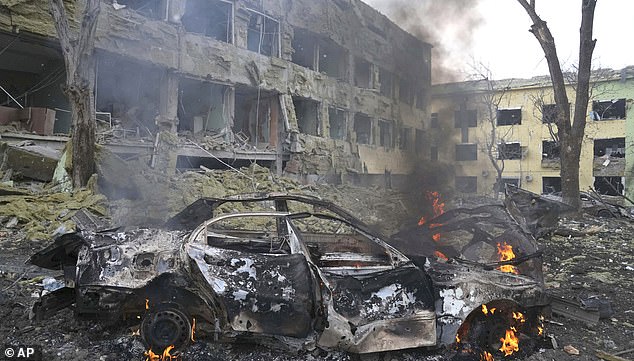 The burning wreckage of a car is seen outside a destroyed children’s hospital in the Ukrainian city of Mariupol, which has been under heavy Russian bombardment for more than a week 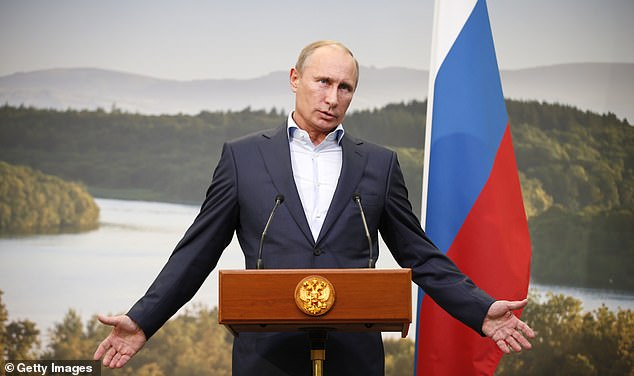 One Western official who spoke on on condition of anonymity said: ‘I think we’ve got good reason to be concerned about possible use of non-conventional weapons, partly because of what we’ve seen has happened in other theatres.

‘As I’ve mentioned before, for example, what we’ve seen in Syria, partly because we’ve seen a bit of setting the scene for that in the false flag claims that are coming out, and other indications as well.

‘So it’s a serious concern for us.’

He said a ‘small consignment’ of Javelin anti-tank missiles will follow, while ministers consider whether to send Starstreak high-velocity anti-air missiles.

But a Polish proposal to hand its MiG-29 fighter jets to a US military base in Germany, with the expectation they would be handed to Ukrainian pilots, was dismissed in Washington.

Downing Street said the Prime Minister, who met with his Polish counterpart in London Mateusz Morawiecki on Tuesday, believed it ‘wouldn’t be tenable for Nato pilots and Nato-badged jets to be shooting down Russian aircraft’.

Allies fear that such a move would risk provoking a wider conflict, and the Western official said the difference between the weapons is that the existing support is ‘defensive’.

‘You can’t use a NLAW to attack Moscow, you can’t use the Stingers to launch over a long range. These are weapons that can only really be used defensively,’ they said.

‘Some Nato members would have seen that (Polish aircraft) as very different and possibly likely to provoke a different kind of Russian reaction. So that’s a matter for the US and the Poles but I don’t think that’s going anywhere.’

The official warned that Russian troops on the ground are ‘continuing to tighten the noose’ around Kyiv.

‘This is definitely not over, they are still set on moving in, we’re reasonably confident. It’ll be utterly horrific when they do, I’m sure,’ they said. 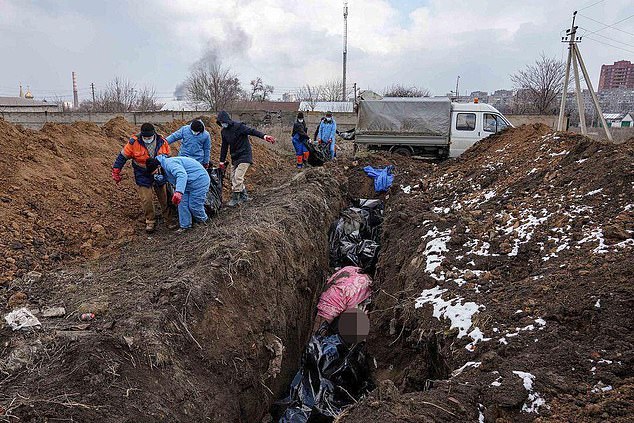 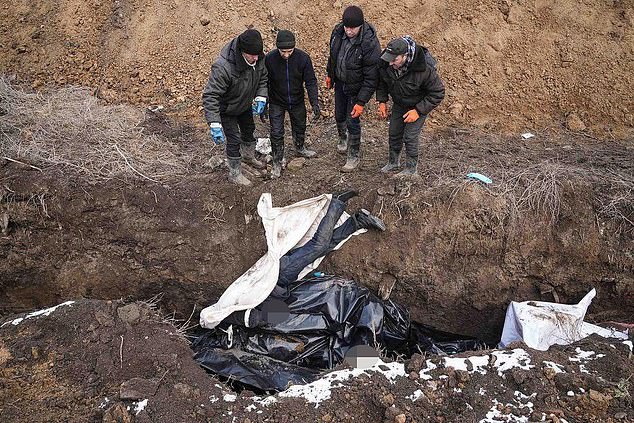 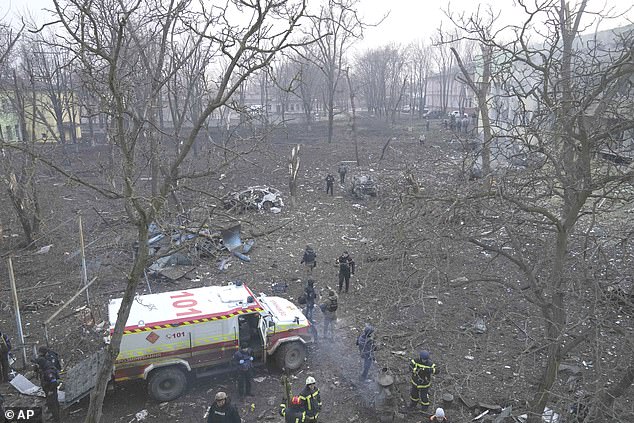 Ukrainian emergency employees work at the side of the damaged by shelling maternity hospital in Mariupol, Ukraine, Wednesday, March 9, 2022 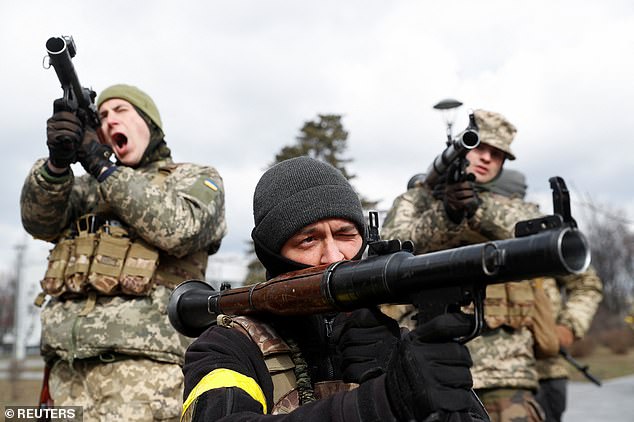 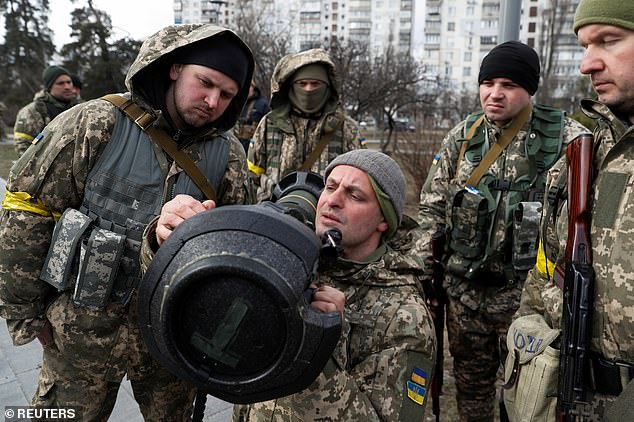 Recent conscripts into the Ukrainian Territorial Defence are trained to use NLAW anti-tank launchers in Kyiv, as the city prepares to defend itself from a Russian assault

A second official warned of more repression of the people in Russia to come as the Russian president faces an extended campaign that he did not prepare his citizens or troops for.

‘This will end because of a combination of factors, one of them is the impact of sanctions, but it’s only one of them,’ they said.

They said that Russians are starting to notice Western measures such as restrictions on paying with credit cards and Apple Pay, as chains such as Starbucks and McDonalds close, but that the full impact of sanctions is yet to come.

They added: ‘At the moment it’s more inconvenience rather than hardship and it’s a shock for Russians who didn’t expect the invasion and are suddenly seeing the sorts of things that they’ve got used to that are normal in most European countries are suddenly being taken away.’