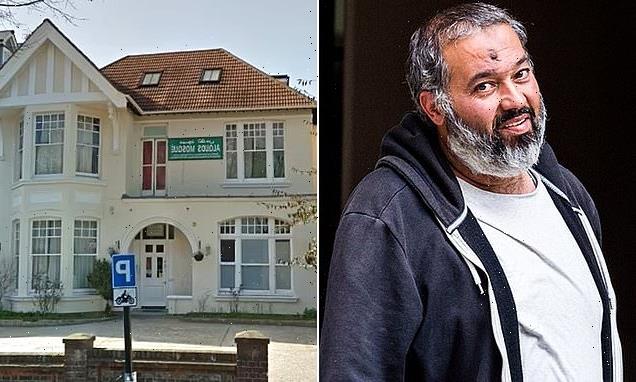 A mosque is being probed for failing to intervene when one of its trustees demanded ‘jihad by sword’ in front of vulnerable teenage boys.

Abubaker Deghayes was jailed for four years in April for inciting terrorism to a room full of 50 worshippers – including children – at Brighton Mosque and Muslim Community Centre.

The mosque received an official warning in May but the Charity Commission has this week said a trustee should have stepped in to minimise the potential harm of Deghayes’ message.

The regulator said the trustee made no attempt to intervene; even as Deghayes made a stabbing gesture as he encouraged jihad.

A Charity Commission spokesman said: ‘The commission determined the trustees knew or ought to have known the risk this individual [Deghayes] posed to the charity, and set out the actions trustees should take to protect the charity and its beneficiaries from abuse.’ 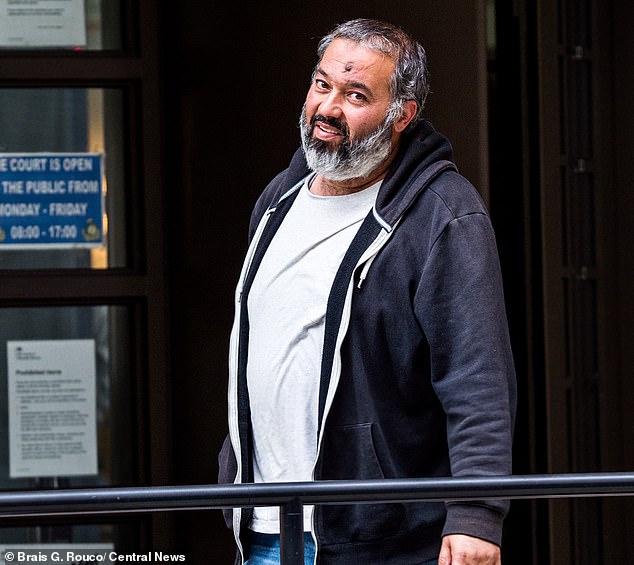 An inquiry will look at the administration, governance and management of the mosque, and whether trustees have been properly appointed or removed.

It will also explore what they have learned from Deghayes’ conviction, whether the mosque’s income and spending has been properly accounted for, and if that money has been used exclusively for a charitable purpose.

The Libyan-born mosque leader, of Saltdean, Brighton, had denied wrongdoing and claimed he was talking about jihad by the sword as a form of self-defence.

Deghayes is the father of two British jihadists killed in Syria while fighting for an affiliate of terror group al-Qaeda.

One of his sons, Abdullah Deghayes, 18, was killed by a sniper in Syria while fighting for Jabhat al-Nusra in the Idlib Province. Nine months later Abdullah’s younger brother, Jaffar, 17, was also killed in Syria.

A third brother, Amer, then 20, was shot in the stomach in the same battle as Abdullah but survived.

In the sermon, Deghayes criticised Boris Johnson, saying: ‘We have a prime minister at the moment who has made a mockery of the niqab before becoming the prime minister and said this is like a letter box.’

Citing coronavirus, he added: ‘Look at the corona, now look how the world is in a mess, great mess. Where are these scientists? Where’s these armies? Where are the technology? Where are the laboratories?

‘There’s no strength or power except with Allah. There were plagues in the community before there was cholera, millions died, never mosques were closed, ever ever.’

‘This guy is crazy man, you know they’re going to take him to Belmarsh [prison] very soon. Look what he’s doing, look, look! Don’t say this brother, don’t do that. Sit down.

‘Today you pass by, you see a person you know kicking the mosque and we pass, it’s not my business, it’s got nothing to do with me. Who is it to do with? It’s the house of Allah.

‘Why is it always him who’s doing this? Why are you angry? He has anger management problems. The community has forgotten its duty.’

Deghayes also watched one of his sons, Abdul Deghayes, die on the streets of Brighton during a drug deal in February 2019.

Abdul, a 20-year-old ‘drug enforcer’, was murdered by Daniel MacLeod who stabbed him in the leg, arm and buttocks before driving away and leaving him to die.

A fifth brother, Mohammed Deghayes, was jailed for four years at Lewes Crown Court in April 2018 after police found him in the back of a car with 19 wraps of heroin and crack cocaine hidden in his body.

During his trial, Deghayes told the jury he believed jihad by the sword was a ‘fundamental obligation’ and was demonstrating a stabbing action to emphasise his point.

‘No one can wipe out the fact in the Koran that fighting with the sword to protect yourself, lift oppression, open the way for the message to be passed, if blocked, speak the truth in front of a tyrant, nobody can wipe out that,’ he said.

Tom Wainwright, defending, asked: ‘What is the action you are doing?’ 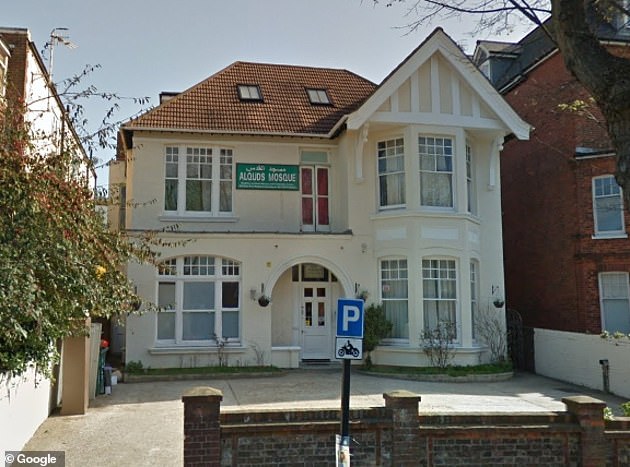 Deghayes delivered the speech to his congregation at Brighton Mosque (pictured), which is now at the centre of a Charity Commission probe

‘That is the dance of the blade, to make sure I bring it home, so no one is misunderstanding, it is jihad of the sword, it is compulsory on us as a Muslim,’ Deghayes said.

Back in August 2018, Deghayes was jailed for 18 months trying to intimidate his wife when he was charged with attacking her.

Deghayes told his wife’s brother to tell her to drop the case against him for assaulting her and not to go to court.

He said she could leave the country and threatened to have her shot if she did not comply.

He also breached court bail conditions not to contact his victim directly or indirectly.

From jihadists killed fighting for terror groups in Syria, to a murder victim killed in a drug deal: Who are the Deghayes family? 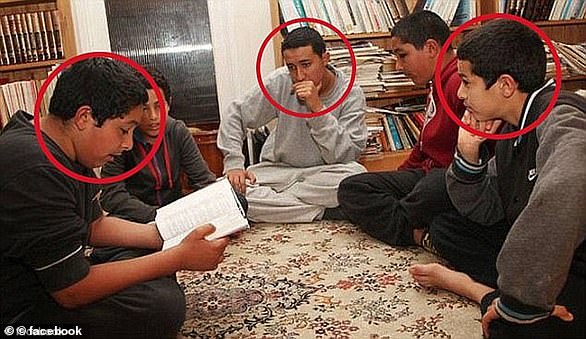 Family: Amer Deghayes (centre, in grey) was the first of his family to leave for Syria, telling his parents he wanted to be an aid worker. Brother Abdullah (front left) and Jaffar (front right) followed soon after

The 53-year-old father-of-six is originally from Syria. He is the brother of Guantanamo detainee Omar Deghayes, and is a former leader of the al-Quds Mosque in Brighton.

Three of his sons have been involved in terror. In April 2014 his son, Abdullah Deghayes, 18, was killed by a sniper in Syria while fighting for the al-Qaeda affiliate, Jabhat al-Nusra. 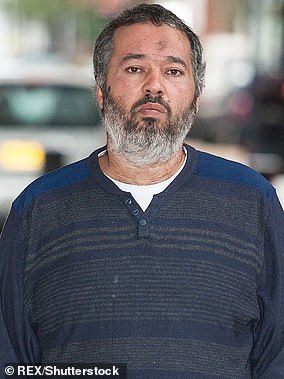 The 53-year-old father-of-six is originally from Syria. He is the brother of Guantanamo detainee Omar Deghayes, and is a former leader of the al-Quds Mosque in Brighton

A third brother, Amer, then 20, was shot in the stomach in the same battle as Abdullah but survived.

Back in Brighton, where Deghayes and his family live, another son, Abdul, also 20, was stabbed to death by a drug dealer in Brighton on 16 February 2019.

Killer Daniel McLeod was later jailed for life and at least 19 years for his murder.

In April 2018, another son, Mohammed Deghayes, was jailed for four years for drug dealing.

He became a trustee of the mosque in Dyke Road, Brighton, also known as al-Quds Mosque, but resigned in 2018.

Deghayes himself was jailed in 2018 for attempting to pervert the course of justice after he was arrested for dislocating his wife’s shoulder during what he said was an attempted exorcism.

He is now back in jail after being found guilty of encouraging terrorism.

He preached that ‘Jihad was compulsory’ to his 50-strong congregation, including children, during an uninvited sermon at the Brighton Mosque in Muslim Community Centre in Sussex. 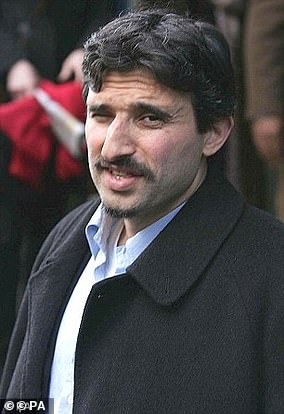 Omar Deghayes, 52, was imprisoned in Guantanamo, the notorious US detention centre on the island of Cuba, after being arrested in Pakistan in 2002

Omar Deghayes, 52, was imprisoned in Guantanamo, the notorious US detention centre on the island of Cuba, after being arrested in Pakistan in 2002.

He was held as an enemy combatant, but claims he was captured by Pakistani bounty hunters and was ‘sold’ to US forces in the midst of the Afghan conflict.

Omar was never charged with terror offences and became the subject of a campaign by his family, backed by six Sussex MPs, to free him.

He was released to the UK in 2007, following a request by the then Labour-run British Government under Gordon Brown.

Omar later alleged he was tortured in Guantanamo, including that he had his eye gouged out by a guard.

In 2007 Omar and another former detainee were arrested under a Spanish warrant on allegations of al-Qaeda involvement in 2003.

Spanish prosecutors made an extradition request to the UK, but dropped it a year later after hearing claims that Omar was suffering from post-traumatic stress disorder. 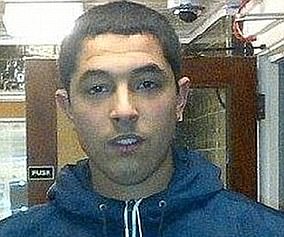 A keen footballer, Abdullah grew up in Brighton with his family. He was the twin brother of Abdulrahman

A keen footballer, Abdullah grew up in Brighton with his family. He was the twin brother of Abdulrahman.

In October 2013, his brother Amer left Brighton for Syria, where he joined a radical Islamist militia fighting Bashar al-Assad’s army.

His friend Ibrahim soon joined him, along with two of Amer’s younger brothers, Jaffar and Abdullah.

Abdullah, was killed aged 18 by a sniper while fighting for an al-Qaeda-linked group in Idlib Province, Syria. 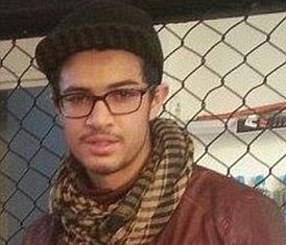 Described as a ‘studious’ youngster, according to reports Jaffar always wanted to become a fireman. He fought for an al-Qaeda as a Jihadist

Described as a ‘studious’ youngster, according to reports Jaffar always wanted to become a fireman.

He is said to have bonded with his brothers through kickabouts in their local park and swimming.

Like Abdullah and Amer, he travelled to Syria to fight as a Jihadist. He died nine months after his older brother Abdullah at the age of 17. 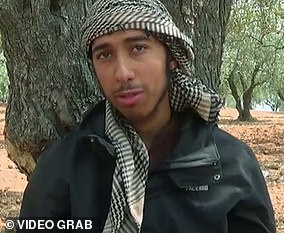 Amer, the eldest son of his family, had set his sights on becoming a serious journalist. Instead, he became a terror fighter

Amer, the eldest son of his family, had set his sights on becoming a serious journalist.

When he wasn’t spending time with his family, Amer hung out with his best friend, Ibrahim Kamara, a refugee from Sierra Leone.

Amer, along with Ibrahim, would end up being the first of the brothers to travel to Syria to fight as Jihadists, later being joined by his Abdullah and Jaffar, who would die fighting.

Amer himself was shot in the stomach in the same battle as Abdullah but survived and remained in the country where he married and had a child. 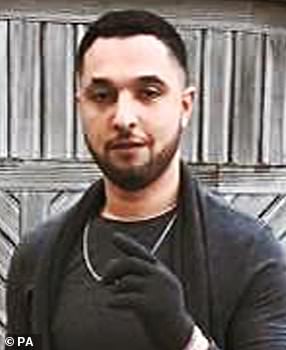 Abdul who did not fight in Syria with his brothers, instead stayed in Sussex and became a drug ‘enforcer’

Abdulrhaman, known as ‘Abdul’, was sent to Longhill High, a school taking children from some of Brighton’s most deprived areas, along with his twin brother Abdullah.

According to a Guardian report in 2016, family friends said the two boys, who were among a small minority of Muslim pupils, were mercilessly targeted with racist abuse.

Abdul, who did not fight in Syria with his brothers, stayed in Sussex and became a drug ‘enforcer’.

He accumulated 14 drug convictions for 25 offences.

But he was stabbed to death aged 22 in a driveway in Brighton in February 2019 as a punishment because he had previously stolen drugs from the dealer.

Knifeman Daniel MacLeod, 37, left Abdul to bleed to death on a Brighton street after stabbing him in the leg, arm and buttocks and driving away.

MacLeod, who was convicted of his murder, was given life with a minimum sentence of 19 years in 2020.

Little is known about Mohammed Deghayes’ early years, other than that he too grew up with his five siblings in Brighton.

Aged 20, he was jailed for four years at Lewes Crown Court in April 2018 after police found him in the back of a car with 19 wraps of heroin and crack cocaine hidden in his body.

He has never been linked to Islamist activities.

Hollie Collinge, defending him during his case, said Deghayes had turned to drugs as ‘a much-needed escape from everything going on around him’ and that he had been clean during the six months he had spent in custody since his November 2017 arrest.