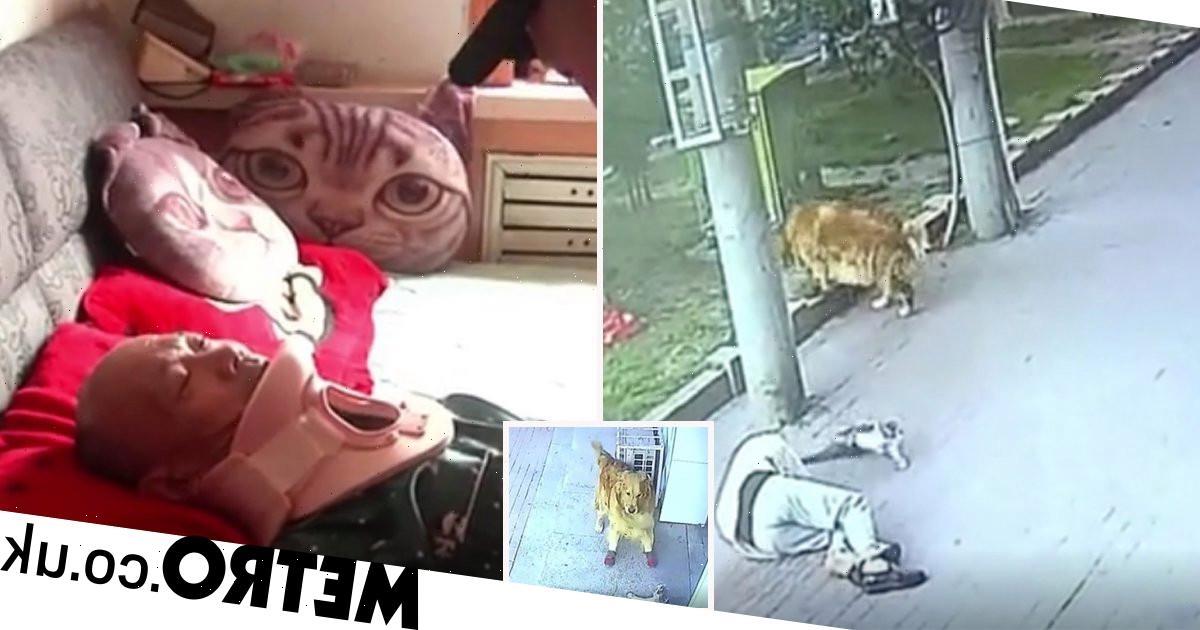 An ageing golden retriever eventually came to the defence of its injured owner after a cat fell six floors and knocked over a pensioner.

Remarkable footage shows an elderly gentleman in northern China fall to the ground after being struck by the animal, before his dog stops sniffing a nearby tree, notices what has happened and corners the cat.

The pensioner’s pet, itself seemingly quite frail, was walking ahead of the man when the incident took place, before padding back to its owner to investigate. It then clocks the attacker in a nearby doorway and walks over, despite two of its paws seemingly needing protective coverings.

The pair then get into a fight, but it is unclear if that is because the dog knew what the cat had done to its owner – or if it was simply distracted by what it thought was a passing cat.

The man was taken to hospital and pictured in a neck brace, surrounded by cat cushions, but is now recovering.

In the footage, the two animals square up, with the dog starting the altercation and aiming a tame paw in the cat’s direction.

The significantly more agile cat dodges, before retaliating with a viscious strike at the dog, who manages to avoid its claws.

The video, shot in the city of Harbin, in Heilongjiang Province, shows the cat suddenly fall from the sixth floor of a residential building.

After the retriever saw its owner not moving on the ground on July 12, it spotted the cat and stopped the feline from running away.

A passerby called the police and the elderly man was sent to hospital for treatment. He had a cervical spinal cord injury.

The man was discharged from hospital and is recovering at home, while he is going to take legal action to get compensation from the cat’s owner, reports said.

It unclear what caused the cat to fall and both animals appear to have been unharmed in the incident.