The number of people dying in care homes soared by 61 per cent during March and April as the Covid-19 outbreak gripped England and Wales, government data revealed today.

Office for National Statistics (ONS) figures showed hospital deaths fell by 21 per cent between March 7 and May 1, while they rose 43 per cent in private homes.

In a first-of-its-kind report, statisticians said undiagnosed cases were a ‘likely explanation’ for many of the 13,000 excess deaths not directly linked to Covid-19.

But it also acknowledged that thousands of people may have avoided getting medical help out of fear of catching the virus or adding extra strain to an already over-stretched NHS.

Less NHS hospital capacity and delayed treatment may also have been to blame, as well as higher levels of stress as a result of the unprecedented lockdown imposed on March 23, the ONS said.

The biggest surge in ‘excess deaths’ – those that happen above the average number for the time of year – was seen in dementia patients and the elderly.

Head of health analysis at the ONS, Nick Stripe, said on Twitter: ‘Dementia increases are so sharp it’s implausible that they are unrelated to Covid-19.’

If the excess deaths are related to the coronavirus it would mean the true death toll of the UK’s epidemic – which the Department of Health yesterday put at 39,904 – is significantly higher than data currently shows. 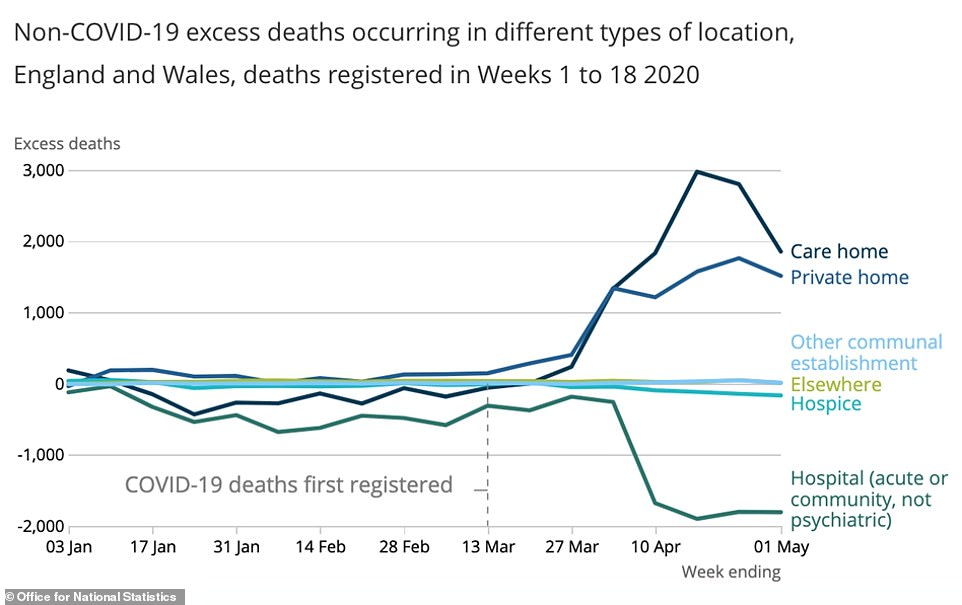 ONS data shows a large spike in the number of people dying in care homes in April, the peak of Britain’s coronavirus crisis, as thousands fewer people died in hospitals during that time 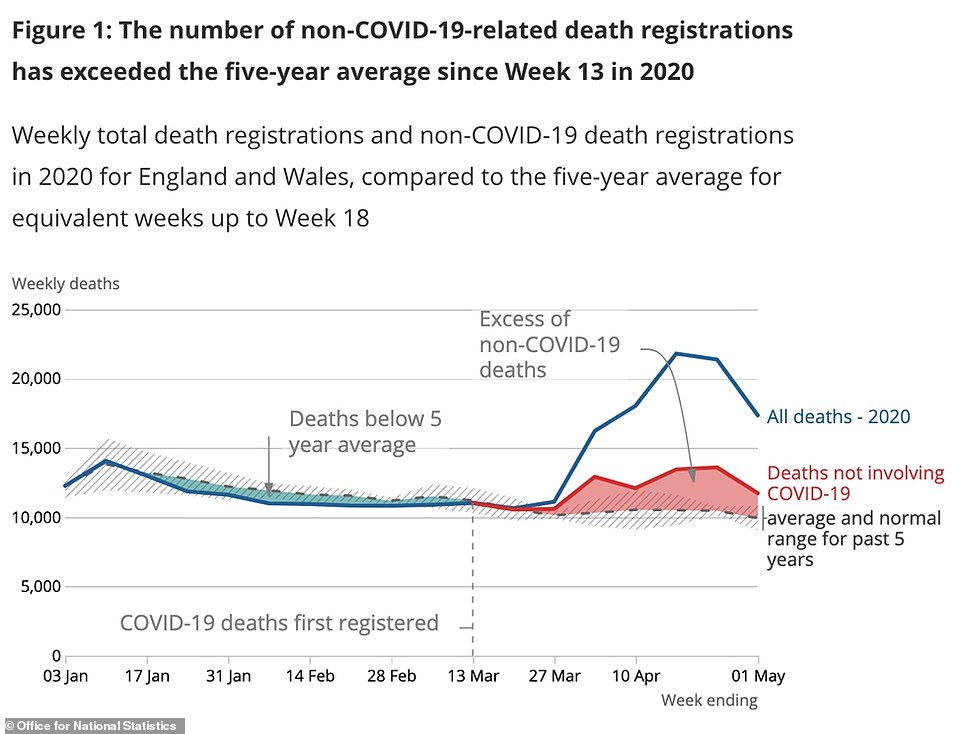 More than a quarter of all excess deaths recorded in March and April were not officially linked to Covid-19, statisticians found, but they suspect many of those were simply undiagnosed cases

That period, when NHS hospitals were urged to turf out as many patients as they could who didn’t need urgent treatment, saw a 20.9 per cent drop in hospital deaths, with 8,000 fewer recorded.

The ONS said, although many of the deaths among elderly people were not attributed to Covid-19, large numbers of undiagnosed cases of the disease were a ‘likely explanation’.

There were 5,404 more deaths than expected among dementia and Alzheimer’s disease patients – a rise of 52 per cent compared to average.

ENGLAND’S CORONAVIRUS OUTBREAK SHRINKS BY HALF

England’s coronavirus outbreak appears to have shrunk by half in the past week, official data has revealed.

The Office for National Statistics predicts that there are now only 53,000 people in England who currently have Covid-19 – 0.1 per cent of the population.

This estimate is a significant drop from the 133,000 people (0.24 per cent) who were thought to the have the illness in the same data last week. It is based on swab testing of almost 20,000 random people across the country.

The ONS report said: ‘As the proportion of those testing positive in England is decreasing over time, it is likely that the incidence rate is also decreasing.

‘However, because of the low number of new positive cases, we cannot currently measure a reduction.’

Different data from blood antibody tests, published yesterday by Public Health England, suggested that around 8.5 per cent of the country has had the virus already – some 4.76million people.

Professor Keith Neal, an epidemiologist at the University of Nottingham, said: ‘The rate of infection continues to decline and is half what it was two weeks ago. Changes over a longer period are now statistically significant.

‘This is highly compatible with the fall in diagnosed cases. The contact tracing service has more than enough staff to cope with the current level of infection.’

And 1,567 excess deaths occurred due to ‘symptoms signs and ill-defined conditions’ – a 77.8 per cent rise from the five-year average.

Combined, those two categories accounted for two thirds of all the excess deaths that happened in that period.

Undiagnosed Covid-19 could ‘help explain the rise’ in the deaths of frail elderly people with underlying conditions, particularly women and those in care homes, the ONS added.

Nick Stripe wrote in a Twitter thread today: ‘Dementia increases are so sharp it’s implausible that they are unrelated to Covid-19.

‘They generally affect the very old, they would tend to impact women to a greater extent than men simply due to pop[ulation] structure. Especially once care home epidemics took hold with [limited] testing.

‘No reason to believe that Covid-19 has been knowingly omitted from death [certificates]. Symptoms may not be apparent. But we cannot discount the impact of changes to normal routines for vulnerable care residents following lockdown. These could have had adverse consequences too.

‘The balance of evidence so far points to undiagnosed Covid in the elderly being the most likely explanation for a majority of excess deaths that did not mention CV on [death certificates].’

Mr Stripe added that this would tie in with a lack of testing in care homes throughout the majority of the outbreak.

Some experts have reported that elderly people seem to show different symptoms to younger people – more likely to be exhausted and weak than to have a cough – so it may have been harder for doctors to link deaths to the coronavirus without tests.

Mr Stripe’s points are expanded in the ONS report, which read: ‘The absence of large rises in deaths due to [dementia] that mention conditions that could exhibit similar symptoms to Covid-19 suggests that if Covid-19 is involved in the increase in deaths due to dementia and Alzheimer disease, the usual symptoms of Covid-19 were not apparent.

‘This could fit with recent clinical observations, where atypical hypoxia [low blood oxygen] has been observed in some Covid-19 patients.

‘In someone with advanced dementia and Alzheimer disease, the symptoms of Covid-19 might be difficult to distinguish from their underlying illness, especially with the possibility of communication difficulties.

‘Care home residents have experienced changes to their usual routine as a result of measures to tackle the coronavirus pandemic. Adverse effects of such changes cannot be discounted as another possible explanation of the increase in the number of deaths in care homes.’ 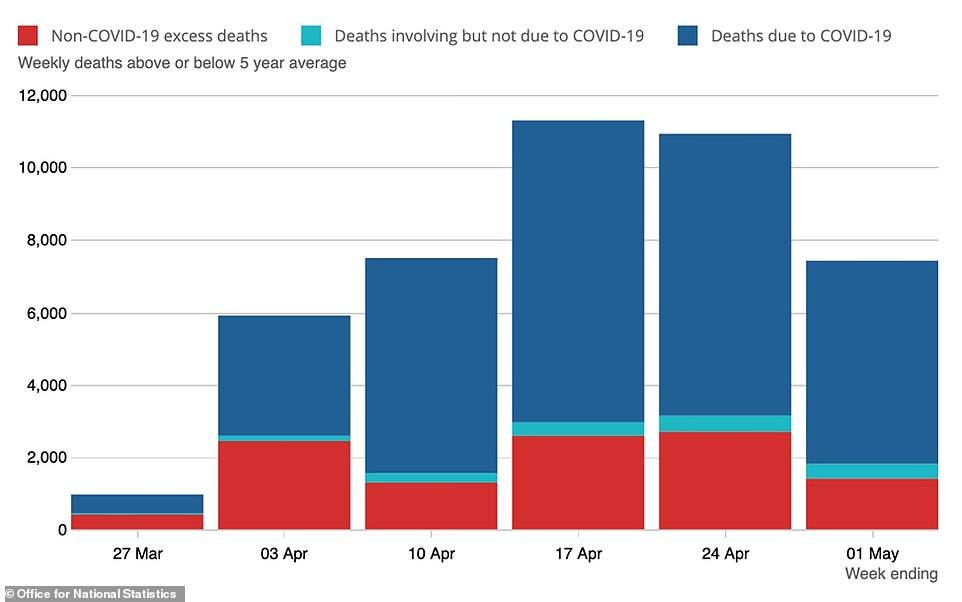 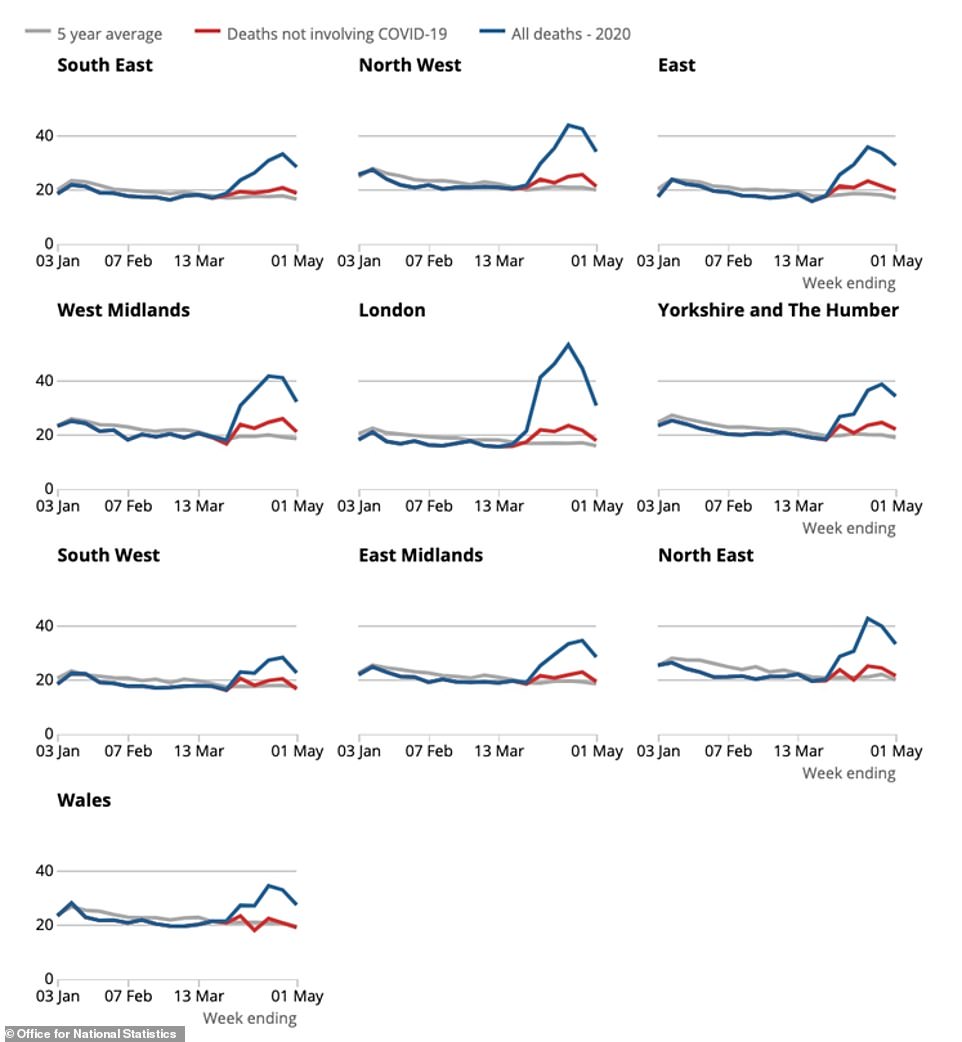 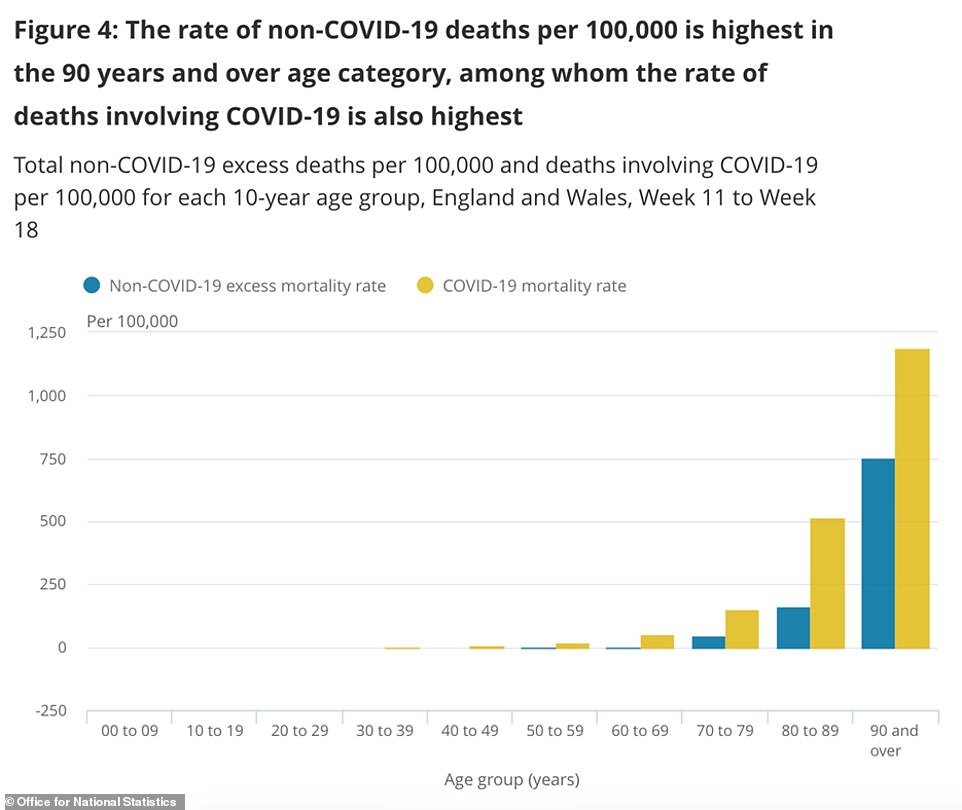 Friday’s release is the first detailed analysis from the ONS looking at the increased number of deaths during the pandemic where coronavirus was not mentioned on the death certificate.

The highest number of excess non-Covid-19 deaths have taken place in care homes, with a weekly maximum of 2,975 of these deaths being registered in the seven days to April 17.

Non-Covid-19 deaths in private homes saw a separate peak in the week ending April 24, when 1,760 were registered.

The ONS said that if patients have been discharged from hospital sooner than they may have been typically, because of pressure on the NHS’s resources, this ‘could have resulted in some deaths occurring in care homes or private homes that would have otherwise occurred in hospital’.

It added that the reported lower rates of testing in all settings outside hospitals ‘could lead to some deaths in other locations involving Covid-19 not having Covid-19 listed on the death certificate as a contributory factor, leading to apparently higher non-Covid-19 excess deaths’.

Chief executive of the King’s Fund think-tank, Richard Murray, said today: ‘This analysis confirms that the true death toll for Covid-19 is significantly higher than the numbers reported so far, with the majority of excess deaths likely linked to undiagnosed Covid-19.

‘It also suggests that the pandemic has resulted in a number of deaths from other causes that would not have occurred if the country wasn’t dealing with a pandemic.

‘The report shows a significant spike in deaths attributed to dementia, which includes many care home residents whose lives may have been cut short by undiagnosed Covid-19.

‘ This once again highlights the tragic scale of avoidable deaths among people the government pledged to protect. Social care must never again be treated as an afterthought to the NHS but as an equal partner in an interdependent system.’