Heart-stopping moment car spins out of control after narrowly avoiding a head-on crash with driver overtaking a lorry on a dark, wet Highland road

Shocking footage has captured the moment a motorist spins off the road after moving to avoid a head-on collision with a driver overtaking a lorry on a single carriageway.

The dashcam clip shows the motorist as they are forced to swerve from the A87 near Invergarry in Scotland in order to avoid crashing with an overtaking driver at around 4.30pm on Monday.

In the footage, the motorist is seen travelling at around 50mph in the rain when two headlights are suddenly seen approaching from the distance.

As the lights draw closer it becomes apparent that the vehicle is a lorry, flanked by a car which is attempting to overtake it. 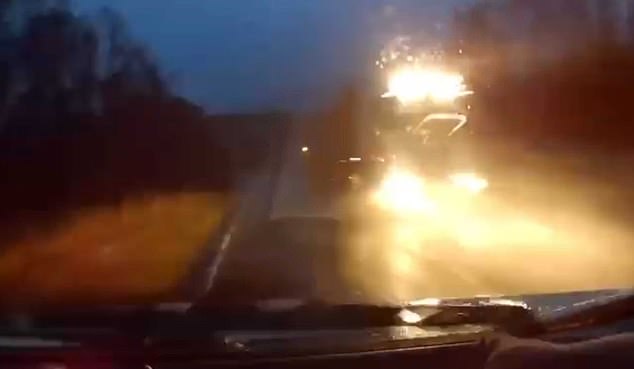 The dashcam clip shows the motorist as they are forced to swerve from the A87 near Invergarry in Scotland in order to avoid crashing with an overtaking driver at around 4.30pm on Monday

The dashcam driver is then forced to swerve violently to avoid a head-on collision with the overtaking vehicle.

The car then takes a dramatic turn, missing both the overtaking driver and the lorry before it spins out of control.

It slides down the side of the road before hitting the bollards and eventually coming to a stop.

The short clip was uploaded to Facebook by the dashcam driver’s friend Ray Lamont on Monday in a warning to other motorists.

He wrote alongside the clip: ‘Please folk be careful on the roads. 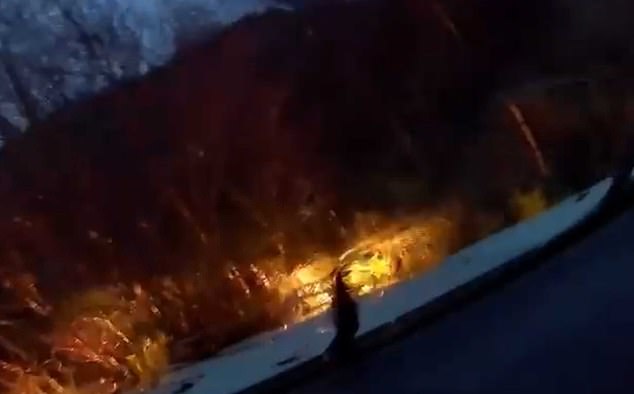 The car then takes a dramatic turn, missing both the overtaking driver and the lorry before it spins out of control

‘Unfortunately this happened to a family friend yesterday en route home from Inverness, neither car or lorry stopped following this incident.

‘Everyone was okay (apart from the car!), but it highlights the dangers of being on the roads especially at this time of year.’

The dramatic clip has since sparked a reaction from other motorists, with one saying: ‘Near misses like this are far too common on the roads, folk too keen to get ahead and take chances.’ 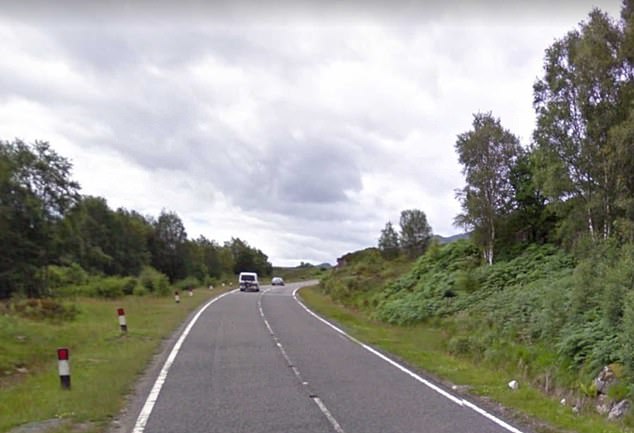 Pictured: The stretch of the A87 near Invergarry in Scotland where the incident took place

William Beedie said: ‘You would think cars would be slower on that stretch of road mainly due to deer along that part of the road.’

Police Scotland said: ‘Police were called around 4.25pm on Monday, 23 November, 2020 following the report of a one vehicle road crash on the A87 near Invergarry.

‘Officers attended and there were no injuries.

‘Enquiries are currently ongoing to establish the full circumstances surrounding the crash.’