A California college professor has been arrested, charged with arson in connection with one of a series of suspected arson fires set near the state’s massive Dixie Fire, authorities said, according to reports.

That page was not working on Tuesday night.

Maynard was facing charges of arson in connection with the Ranch Fire as well as unauthorized entry into a closed area, FOX 40 reported. He was arrested Saturday following an investigation that began in July, according to the station.

Court documents indicate that the Ranch Fire and six other fires started between July 6 and Aug. 7 near the Lassen National Forest and Shasta-Trinity National Forest, both in Northern California. The three most recent fires, including the Ranch Fire, started in the area of the Dixie Fire, the report said. 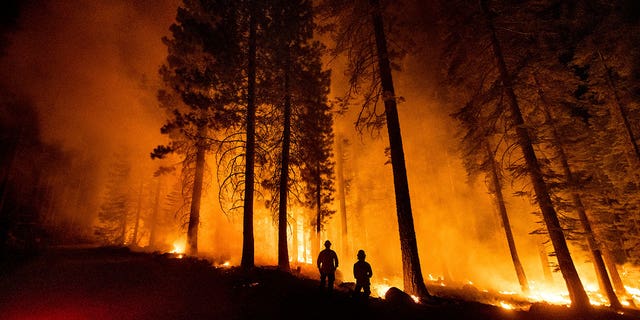 “The area in which Maynard chose to set his fires is near the ongoing Dixie Fire, a fire which is still not contained despite the deployment and efforts of over 5,000 personnel,” Assistant U.S. Attorney Michael Anderson wrote in a memo, according to FOX 40.

“Agents had installed a tracker on his vehicle,” Anderson wrote. “Where Maynard went, fires started. Not just once, but over and over again.”

Maynard was listed by Sonoma State as having been a lecturer in criminal justice studies but was no longer with the university, the Sacramento Bee reported.

“He was a part-time lecturer in the Department of Criminology and Criminal Justice,” a Sonoma State spokeswoman wrote to the Bee in an email. “He was employed with Sonoma State University in Fall 2020, but did not have an appointment for Spring 2021.

“Mr. Maynard was contracted to fill in for a faculty member who was on leave. He taught two seminars in Criminology and Criminal Justice Studies in Fall 2020.”

Santa Clara University also confirmed that Maynard had worked there, the Bee reported.

“Gary Maynard was an adjunct faculty member in the sociology department at Santa Clara University from September 2019 to December 2020,” the university told the newspaper in an email.

Maynard could face up to five years in prison and a $250,000 fine in connection with the Ranch Fire, the Bee reported.

The Dixie Fire, which began July 13, is now the largest in California history. It has been burning across four counties – Butte, Plumas, Tehama and Lassen.

The Dixie Fire was 25% contained as of Tuesday morning, SFGate.com reported.