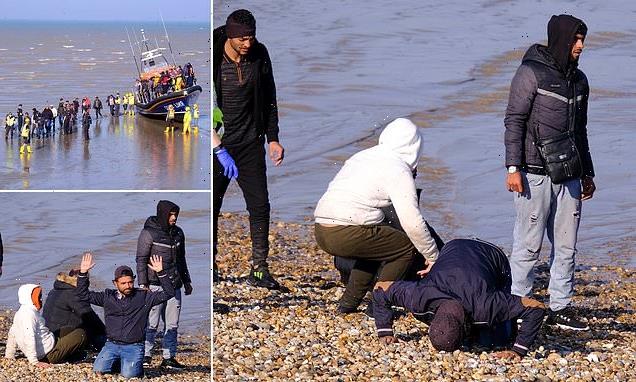 Priti Patel will hold showdown talks with her French counterpart over migrant crossings today as the MP for Calais dismissed threats to withhold £54million of funding.

The Home Secretary will meet Minister of the Interior Gerald Darmanin in London amid growing alarm at the record numbers trying to get across the Channel.

There have been complaints that Paris is not doing enough to block journeys, despite the pledge of cash from the UK to help the efforts.

Demands to send would-be refugees straight back to France have also been decried as dangerous and a breach of international law.

Government sources told MailOnline the discussions today will focus on ‘working together and outcomes’.

Pierre-Henri Dumont, who represents Calais in the French National Assembly, warned that ‘nothing can stop’ migrants coming.

‘The fact is, we’ve got 300 to 400 kilometres of shore to monitor every day and every night and it’s quite impossible to have police officers every 100 metres because of the length of the shore,’ he told BBC Radio 4’s Today programme.

Mr Dumont added that while the main reason for the current increase in Channel crossings is the warmer weather, there are ‘numerous causes’ to address about why they are made in the first place.

‘That’s the key point – the causes we need to address are numerous,’ he added.

Mr Dumont cited migrants being more likely to speak English as one of the reasons, and said it is easier for them to find work in the UK despite their illegal status.

He added: ‘We have more and more patrols. The money that was promised to be given by the UK Government to France is set to maintain this number of patrols that we already doubled a few weeks ago.’ 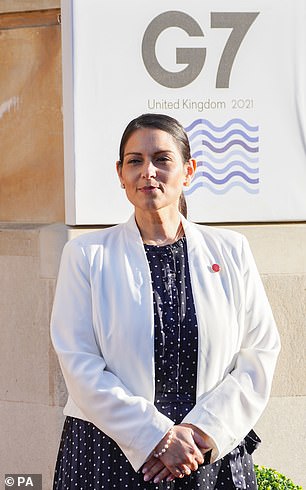 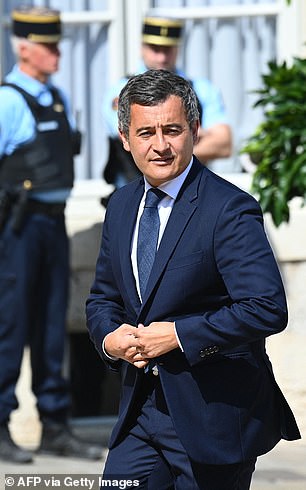 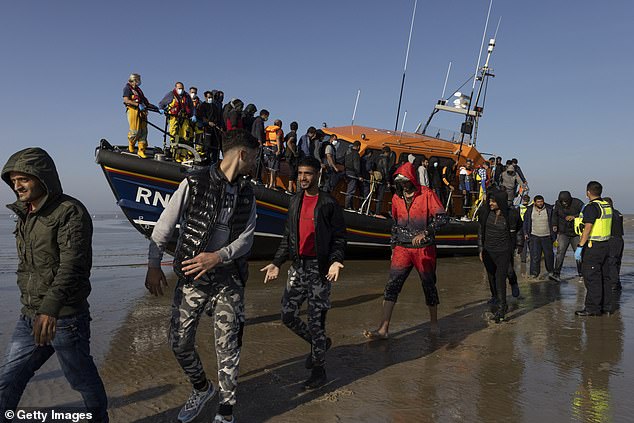 A group of migrants come ashore in Kent yesterday. There have been complaints that Paris is not doing enough to block journeys, despite the pledge of cash from the UK to help the efforts 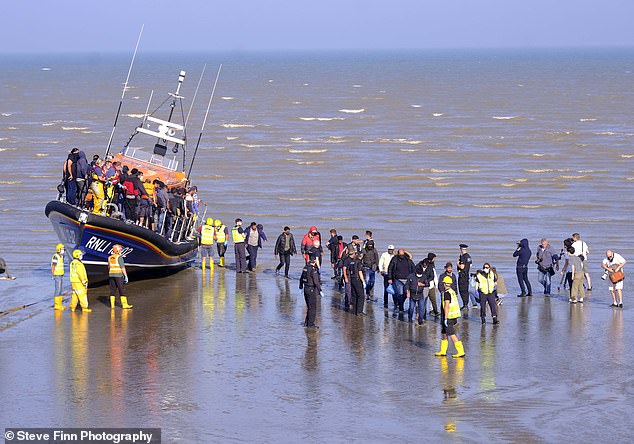 France has been forced to ban the sale of inflatable dinghies from Channel towns in a bid to try to end a surge in migrant crossings.

Sports shops dotted around the French coast near the Channel have been told to stop selling the boats and kayaks amid a steady flow of migrants sailing across the waters to the UK.

But despite the ban, people smugglers are able to get around the restrictions by ordering the inflatable vessels online and getting them delivered to their safe houses, reports The Sun.

The boats and kayaks are then transported by the traffickers to points along the coast where migrants hoping to cross the Channel can pick them up.

Sports retailer Decathlon’s store in Calais showed on their website that boats were not for sale – but the newspaper was able to order a vessel online for £600 and get it home delivered to an address in the coastal city.

Meanwhile, it is also possible to order an inflatable boat on Amazon to be delivered to addresses in Calais.

As smuggling gangs took advantage of fair weather at sea, an estimated 785 people made it to English beaches on Monday, close to the daily high of 828 set last month.

Ms Patel has been telling Conservative backbenchers that unless France starts intercepting three in four attempted crossings she will go back on an agreement signed in July to hand the country another £54million to double coastal police patrols and improve aerial surveillance.

‘We’ve not given them a penny of the money so far and France is going to have to get its act together if it wants to see the cash. It’s payment by results and we’ve not yet seen those results,’ she told the MPs.

However, yesterday the Ministry of the Interior insisted there had been no conditions attached to the deal.

‘The terms of this funding were negotiated in detail with the British side and there was never any question of making payment conditional on quantified targets. Such an approach would reflect a serious loss of confidence in our co-operation,’ the department said.

France insisted it was ‘deploying considerable and constantly increasing resources to prevent crossings’ and had prevented half of those attempted this year, stopping more than 10,000 migrants getting across.

Ms Patel was also urged to resist calls by her backbenchers to start sending boats full of migrants including children back to France before they can claim asylum in the UK.

‘We also call on the British government to be cautious about the announced use of procedures to fight against attempted sea crossings which would not only be dangerous for men, women and children on board these boats, but contrary to international law,’ the Ministry of the Interior said.

Mr Darmanin will meet Ms Patel this week on the sidelines of a G7 gathering of home ministers, to ‘clarify the terms of our co-operation’.

Another 500 migrants are thought to have reached the UK yesterday after another bout of good weather led to a wave of departures from France.

MPs have already questioned why the UK has given yet more money to Paris when so many people are still making the dangerous journey.

Monday’s estimated total could smash the record of 828 crossings in a single day, set on August 21 – the last time migrants successfully crossed to Britain.

A spell of poor weather halted attempts, before 158 asylum seekers, including children, reached the UK across the world’s busiest shipping lane on Sunday.

Around 13,000 have already crossed the Channel to reach Britain this year – eclipsing the 8,417 who made the journey in the whole of 2020. The Home Office has previously pledged to make the journey ‘unviable’. 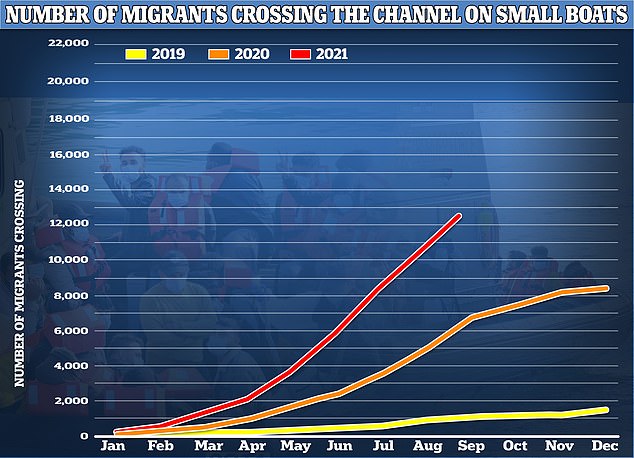 Pictured: A graph showing the number of migrants crossing the Channel on small boats since 2019. The figure has increased each year