Bus-ted! Driver misses closed road sign and crashes into bollards before ripping chunks out of the vehicle by trying to reverse

This is the embarrassing moment a bus driver crashes into two bollards which rip pieces out of the vehicle when he tries to reverse.

The bus driver tried to turn on to Preston Road from the seafront in Brighton but quickly realised the top of the road was closed on Sunday afternoon.

He tries to correct his mistake by turning around via Stone Street and Castle Street.

But when the bus – the number 77 Brighton and Hove Buses’ service to Devil’s Dyke – drove back on to Preston Road, the driver smashed into the two concrete bollards. 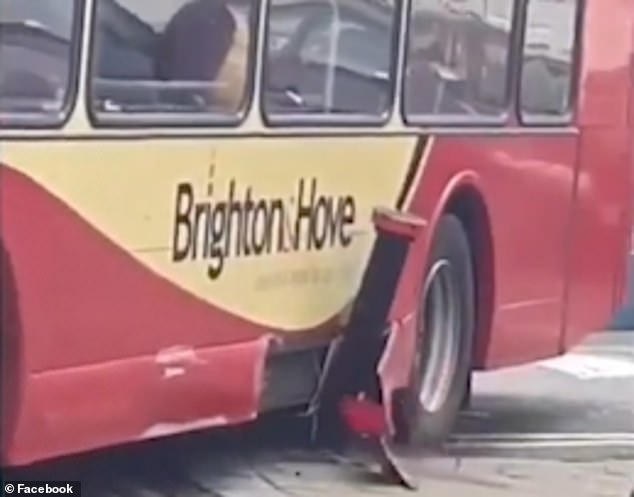 Footage shows the aftermath of the crash, as a crowd gathers to watch the motorist try to free the bus from the posts.

He looks to reverse but the barrier lodged into the left side of the bus cuts deeper and lets out an ear-splitting crack.

So the vehicle is drawn forward, which again only worsens the damage and sees the second bollard wrenched completely out the ground. 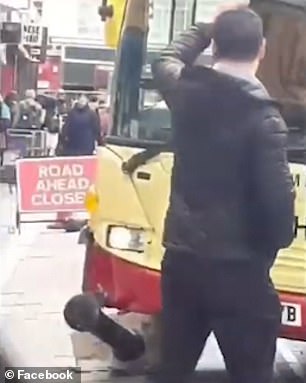 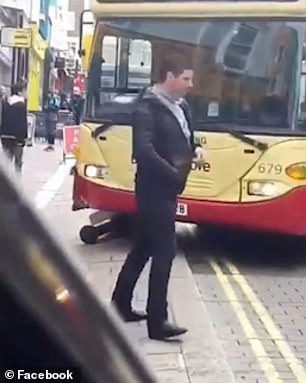 Despite the chaotic scenes, the damaged bus and the ruined bollards, this final effort by the driver freed the vehicle and it pulls away.

A spokesman for the bus company told Brighton And Hove News: ‘The bus was travelling along the A259 Coast Road on route 77 to Devils Dyke on Sunday April 28 at around 14.28.

‘The bus turned up Preston Street, which was closed due to water works at the top of the street, before driving down Stone Street and following Castle St to the end.

‘As the bus tried to turn left down Preston Street it hit two concrete bollards.’

They added: ‘We are currently conducting a full internal investigation of the incident with the help of our driver and Sussex Police.’