Chinese bus hijacker is sentenced to death after ramming the vehicle into passers-by, killing eight people

A bus hijacker who killed eight people in a road rampage on Christmas Day has been sentenced to death in China.

Qiu Rihui, who was armed with a knife, reportedly attacked a female passenger before taking control of the bus in the city of Longyan, in south-eastern China’s Fujian Province.

He then rammed the vehicle into passing motorists and pedestrians, killing eight people including a policeman. The incident also left 22 other people injured.

The news comes as Chinese authorities today executed a man who killed 15 people after ramming a car into a crowded square in central Hunan province last September. 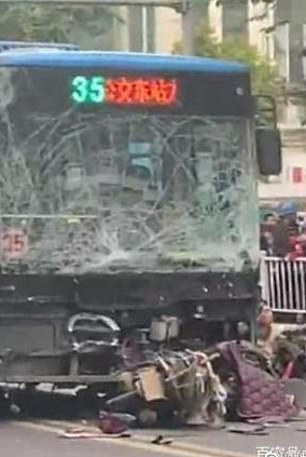 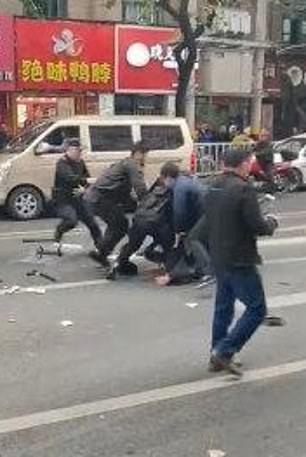 Qiu Rihui attacked a passenger before hijacking a bus on Christmas Day in Longyan, China. He then crashed the vehicle into passing motorists and pedestrians, leaving eight people dead. Stills from videos of the incident shows the wrecked bus and Qiu being captured by police

Qiu, who is reported to be 49 years old and a local, was convicted of the crimes of intentional homicide and endangering public safety by dangerous means yesterday by the Longyan Intermediate Court.

In a video circulating on social media, several injured people were shown lying on the street near a crashed bus, its front badly damaged.

It also showed police wrestling a person to the ground.

Blood could also be seen on the steps of the bus, which had been stopped in the middle of a road. 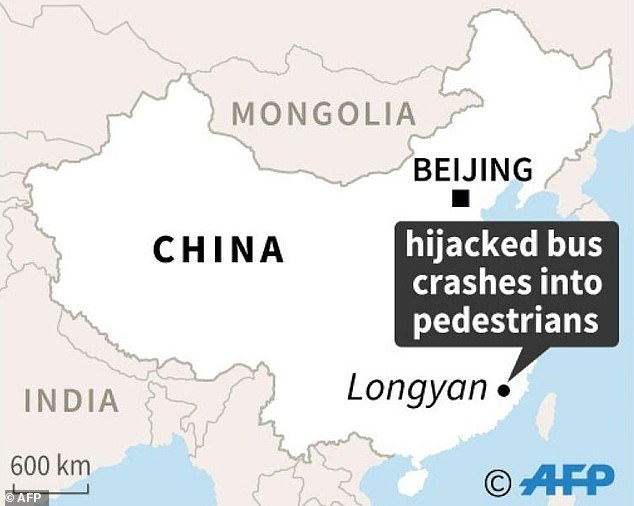 The hijacked bus crashed into motorists and pedestrians in Longyan, south-eastern China

Police said Qiu took extreme measures after harbouring a grudge against the workers at his neighbourhood committee, according to a previous report by China News.

It was reported on the day of the attack, the workers had come to Qiu’s home to process some paperwork for his father and Qiu had got into an argument with them. The furious man then took a knife, rushed out of his home and started attacking people.

In an online statement today, the Longyan Intermediate Court said Qiu’s means of crime was extremely cruel and the situation of his crime was especially serious.

It also said Qiu had brought great harm to other people and the consequences of his crime were particularly severe, therefore he was given the capital penalty.

The decision was made by a judge in a first trial. 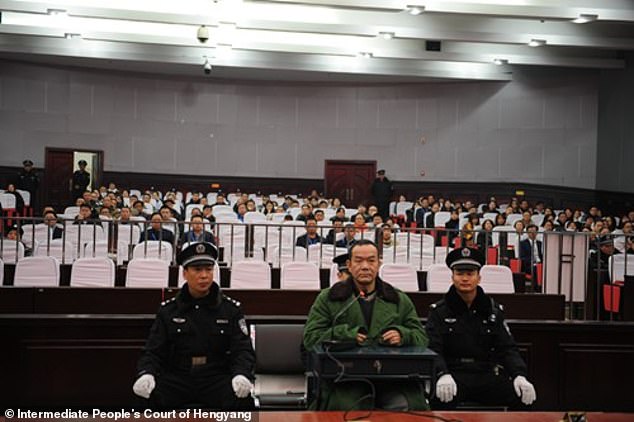 Yang Zanyun (centre), 54, was found guilty of deliberately driving his red Land Rover into crowds before attacking pedestrians with a shovel and a dagger in Hengyang, Hunan province

In late November, a car ploughed into a group of children crossing a street in front of an elementary school in the northeastern Liaoning province, killing five people and injuring at least 19.

The driver said he ‘chose his victims at random’ and had reportedly been contemplating suicide due to domestic troubles before the tragedy occurred.

In October, three people were killed when a man fleeing after committing a stabbing drove into a crowd and attacked onlookers in the eastern province of Zhejiang.

The month before, a man ploughed a Land Rover into a crowd in Hunan province and went on a rampage, attacking onlookers with knives and a shovel. Fifteen died and 43 were injured. The 54-year-old criminal, Yang Zanyun, was executed by the Hengyang Intermediate People’s Court today.