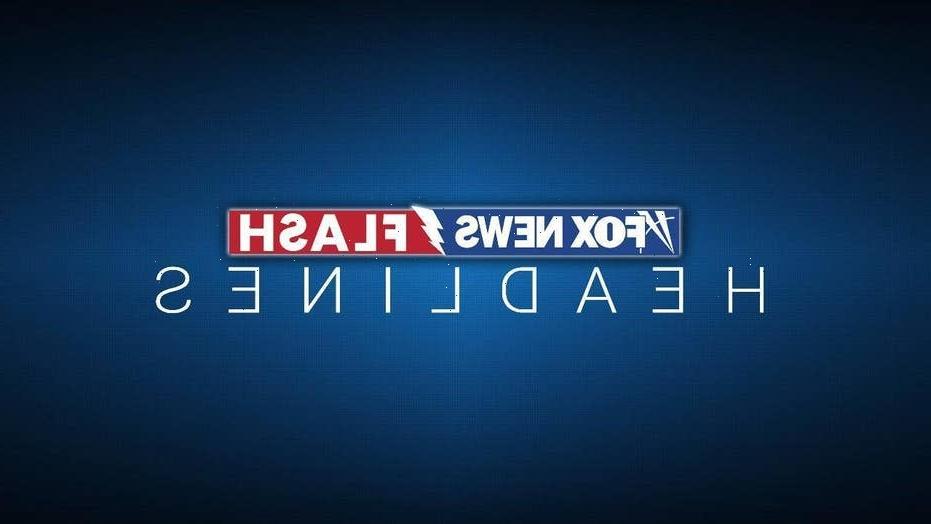 BANGKOK — The U.S. and British embassies in Burma expressed concern about reports of fierce government attacks on a town in western Chin state, where the ruling junta declared martial law because of armed resistance to military rule.

The fighting began around 6 a.m. Saturday when government troops reinforced by helicopters began shelling the western part of the town of Mindat, destroying several homes, said a spokesman of the Chinland Defence Force. It is a locally formed militia group opposed to the February coup that ousted the elected government of Aung San Suu Kyi.

Helicopters also took part in the attack, according to the spokesman, who spoke on condition of anonymity for security reasons.

“Mindat town is now under siege and is bracing for an all-out assault by the junta troops from air and by land,” said a statement by the Chin Human Rights Organization.

The shadow National Unity Government, set up by lawmakers who were blocked by the army from taking their seats in Parliament, warned that “within the next 48 hours, Mindat can potentially become a battleground and thousands of people are facing the danger of being displaced.” Many have already left the town of about 50,000 people, said a resident contacted by phone who was also fleeing. 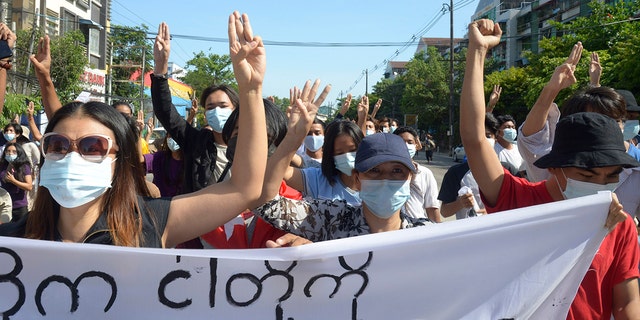 Anti-coup protesters flash the three-finger salute during a demonstration in Yangon, Burma, Friday, May 14, 2021. (AP Photo)

The Mindat Township People’s Administration, another opposition grouping, claimed that 15 young men had been seized by government troops and used as human shields. It said at least five defenders of the town had been killed in clashes and at least 10 others wounded.

None of these details could be independently verified, but a Burma state television broadcast Saturday night reported that fighting was going on, and acknowledged the town’s defenders have been putting up stiff resistance against the army.

“The military’s use of weapons of war against civilians, including this week in Mindat, is a further demonstration of the depths the regime will sink to to hold onto power,” the British Embassy said on Twitter. “We call on the military to cease violence against civilians.”

The U.S. Embassy said it was “aware of increasing violence in Mindat, including reports of the military shooting civilians,” and urged that evidence of atrocities be sent to U.N. investigators.

Detailed tallies compiled by several different watchdog groups say government security forces have killed upwards of 750 protesters and bystanders as they have tried to suppress opposition to the military’s seizure of power. In April, security forces were accused of killing more than 80 people in one day to destroy street barricades that militants had set up as strongholds in the city of Bago.

In many or most cases, police and soldiers were trying to break up peaceful protests, though as they increased the use of lethal force, some protesters fought back in self-defense. In recent weeks there has been an upsurge in small bombings in many cities, mostly causing little damage and few casualties.

The junta says the death toll is less than 300, and the use of force was justified to quash what it calls riots. 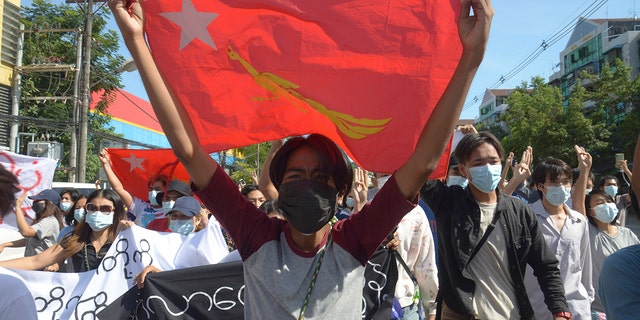 Anti-coup protesters display a party flag of the National League for Democracy (NLD) during a demonstration in Yangon, Burma, Friday, May 14, 2021. (AP Photo)

Mindat’s resisters are only lightly armed, mostly with a traditional type of single-shot hunting rifle, but the territory around the town is mountainous and wooded, favoring defenders over attackers.

The report on state television MRTV listed past attacks on government forces and installations, most recently on Thursday, when it claimed a force of about 100 blocked security forces from entering the town, destroying one vehicle and leaving an unspecified number of security forces dead and missing.

In a later attack, it said, an even bigger force was said to have launched an attack from the city on security forces patrolling nearby, destroying six vehicles and causing an unspecified number of government casualties.

The opposition government earlier this month announced a plan to unify groups such as the Chinland Defense Force into a national “People’s Defense Force,” which would serve as a precursor to a “Federal Union Army” of democratic forces including ethnic minorities.

Khin Ma Ma Myo, deputy defense minister of the shadow government, said one of the duties of the People’s Defense Force is to protect the resistance movement from military attacks and violence instigated by the junta.