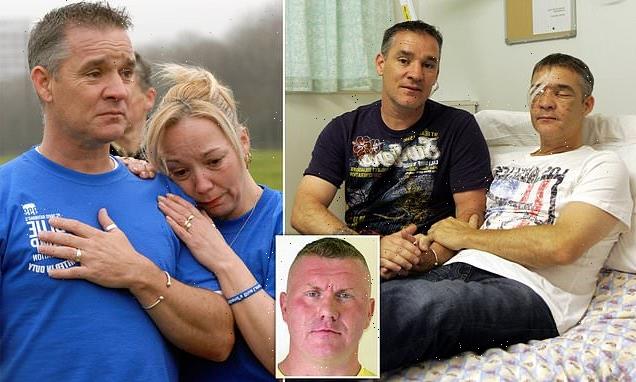 ‘We as a family do not need any other reminders’: Brother of David Rathband who killed himself after being blinded by Raoul Moat slams new ITV drama on hunt for the gunman

The twin brother of policeman David Rathband, who was shot and blinded by killer Raoul Moat, said he will not watch a new drama about the gunman.

Darren Rathband, 54, has urged people to remember the victims of Moat’s deadly attack in July, 2010, instead of focusing on the killer.

He said he will not be watching ITV’s upcoming series, The Hunt for Raoul Moat, based on the substantial search for the 37-year-old.

The broadcaster confirmed last week that it has started filming the programme.

Mr Rathband, 54, said his family do not need any more reminders of what happened to his twin brother.

‘David loss gives us a painful reminder everyday. If it’s based on facts and not fiction, the story remains the same,’ he told ChroniceLive.

‘I don’t watch them, don’t need to and never will. I sadly lived being involved in it.’ 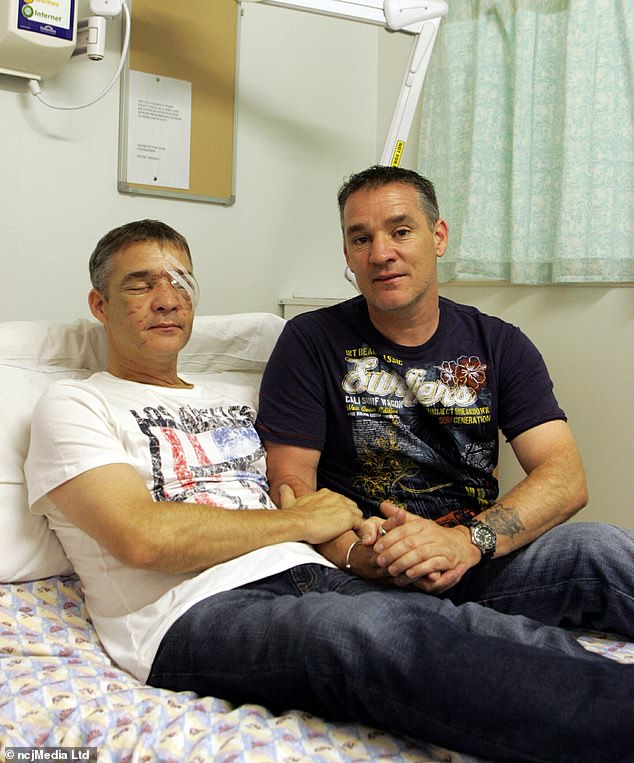 PC David Rathband (left) with his twin brother Darren, after being shot in the face twice by Raoul Moat. He was left blinded by the attack 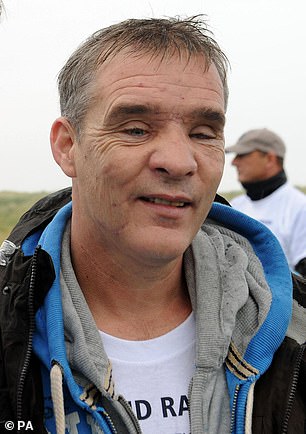 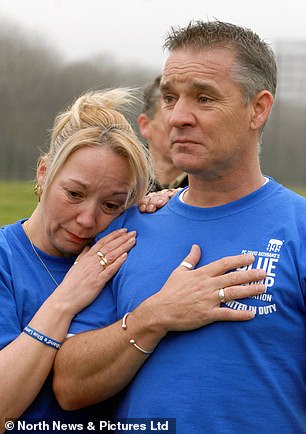 Police officer David Rathband (left) was shot and blinded by Raoul Moat, 37, less than 24 hours after he shot his ex-girlfriend and her new partner. Darren Rathband, 54, his twin brother, said he will not watch the new ITV drama being filmed about the case 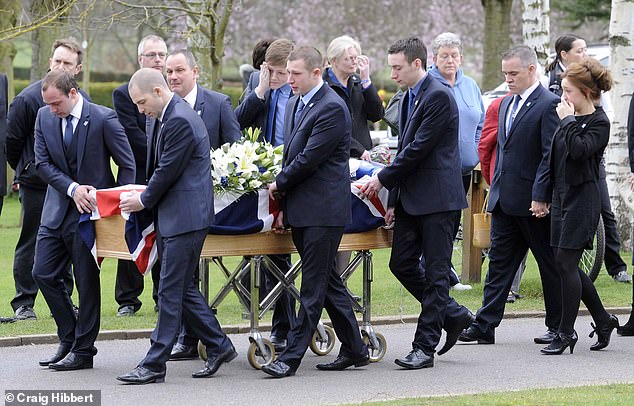 PC Rathband took his life on February 29, 2012, after his 20-year marriage ended the year before. Pictured, his funeral in Stafford

PC Rathband, 42, was sat in his police car on a roundabout above the A1 in Newcastle when he was shot in the face twice by Moat.

It happened less than 24 hours after Moat injured his ex-girlfriend Samantha Stobbart with a shotgun and killed her new partner Christopher Brown with it.

Afterwards, Moat took refuge with a pair of accomplices in Rothbury, Northumberland.

Armed police were drafted in from around the country to find him, in one of the nation’s most notorious manhunts.

He was eventually cornered by armed police before a six-hour stand-off began. As negotiators tried to get Moat to put down his weapon, the crazed killer shot himself in the head.

Thursday, July 1, 2010: Released from Durham prison after serving a short time for assault

Saturday, July 3, 2010: Moat shoots dead Chris Brown, who is the new partner of his ex girlfriend Samantha Stobbart, who he also tried to shoot twice through the window of a property

Sunday, July 4, 2010: Moat shoots PC David Rathband and the public are urged not to approach him

Monday, July 5, 2010: Cleveland, Humberside, West Yorkshire, South Yorkshire and Cumbria Police join up with Northumberland Police to help them with the search for Moat

Tuesday, July 6, 2010: Moat declares war on the police. Police also investigate an armed robbery from the day before as the description matches Moat’s

Thursday, July 8, 2010: Police urge public to be vigilant as they release new images of Moat

Friday, July 9, 2010: Moat located in Rothbury with witnesses saying he is on the floor with a gun to his head near the riverbank

Saturday, July 10, 2010: Moat shoots himself after a six-hour stand off with police

PC Rathband survived the attack by lying in his blood and pretending to be dead, before calling for help from the force on his radio.

He healed from some of his injuries but was left blind. He returned to work and set up a charity for injured emergency service staff.

He also wrote an autobiography and won a Daily Mirror Pride of Britain award for his bravery.

The officer took his life on February 29, 2012, after his 20-year marriage ended the year before, when his wife found out he was having an affair with a 7/7 bombing survivor.

Mr Rathband hopes that anyone viewing the ITV drama will think of Moat as a ‘coward’, and remember his victims.

‘Victims of crime are often forgotten by the names of the cowards that carry out despicable acts of violence towards others,’ he said.

‘This event and actions by a coward are no different.

A spokesperson for ITV said that The Hunt for Raoul Moat also focuses on the three victims, Ms Stobbart, Mr Brown and PC Rathband.

Scriptwriter Kevin Sampson said he hopes the drama condemns a narrative of victim-blaming when it comes to violence against women.

He added that televised coverage of the manhunt in 2010 ‘gripped’ him, and he was interested when Moat was portrayed as a ‘legend’ by some — despite his ‘brutality’.

Simon Heath and Jake Lushington, commenting on on behalf of producers World Productions, said that Mr Sampson has written a ‘compelling and unflinching’ account of the events.

They said the programme highlights ‘the human tragedy behind the lurid headlines’, adding: ‘The drama is a timely reminder of how social media and fake news can create a dangerous myth, in this case that Raoul Moat was any kind of hero.’ 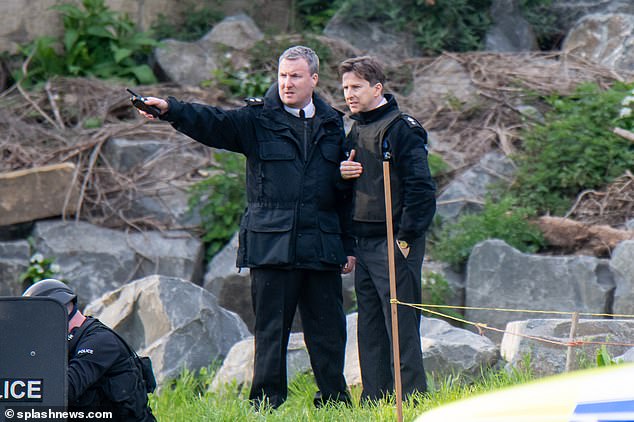 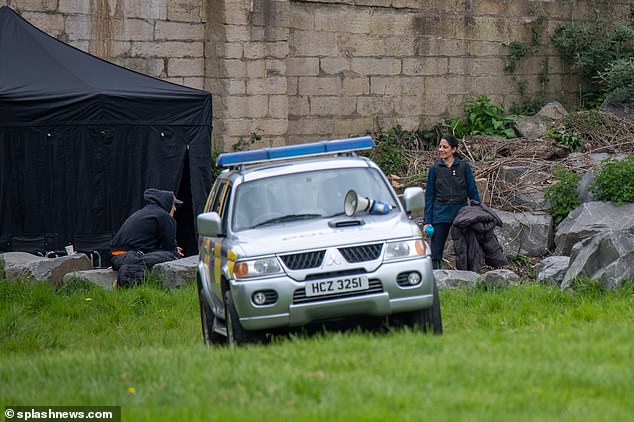 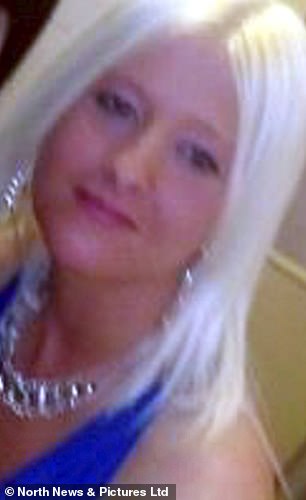 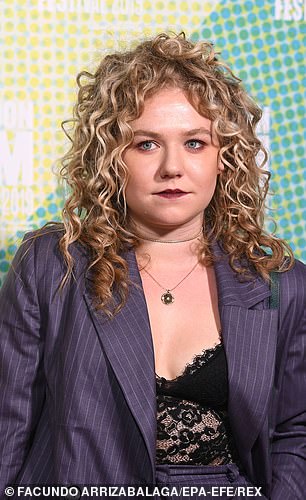 Sally Messham, pictured right, has signed on to play Moat’s ex-lover Samantha Stobbart, who sustained severe injuries after being shot in the stomach by the crazed gunman

The drama will also star The A Word’s Lee Ingleby as Northumbria Police Officer Neil Adamson, who was among the main police officers searching for Moat while he evaded capture.

Tragic officer David Rathband hanged himself after he was blinded by Moat because he couldn’t cope with his new disability, coroner ruled 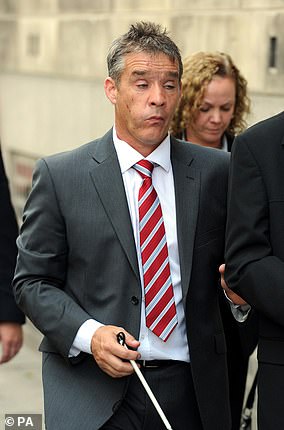 PC David Rathband hanged himself after he was blinded by Moat because he couldn’t cope with his new disability and a breakdown in his marriage, a coroner ruled.

Mr Rathband was found at his home in Blyth, Northumberland, in February 2012, after he was shot in the face by crazed gunman Moat in July 2010.

The officer had moved out of the marital home in August 2011 after his wife found out he was having an affair with 7/7 London bombing survivor Lisa French.

He became a national hero and used his profile to set up the Blue Lamp Foundation to support 999 staff injured at work. However, the inquest heard Mr Rathband, 44, had made threats to kill himself and told Miss French he had attempted to hang himself but could not go through with it.

On the night Mr Rathband took his own life, his estranged wife Kath visited him for the last time. She said she thought he looked ‘awful’ and decided he needed support. But she felt she was not the right person to be with him and contacted his sister Debbie Essery and his welfare officer.

Concluding that Rathband took his own life, Coroner Eric Armstrong said: ‘The circumstances of his injuries [inflicted by Moat] are well known. It is difficult, if not impossible, not to view the infliction of those injuries as the first step in a series which culminated in his death.

‘Many people may look back, police officers and others, and with the benefit of hindsight, form the view that they wish they could have done something else. Could I implore them not to carry that out? Decisions were taken which at the time seemed appropriate and were justified at the time.’

In a statement read after the hearing by lawyer Philip Davison, Kath thanked family and friends for their ‘unwavering’ support. She said: ‘David fought so hard to come to terms with the devastating injuries that resulted from the shooting and the effect it had on us all as a family.

‘Whilst I have lost David, he has left me with two amazing children and he would be immensely proud of them and what they have achieved, as I am.’