British animal trainer who vanished in Tenerife was last seen dancing with her boyfriend in a bar before they left separately, it is revealed – as police investigate if she fell into sea

A British animal trainer who is missing on the island of Tenerife was filmed dancing with her boyfriend just minutes before she vanished.

Amy Louise Gerard was recorded on a mobile phone singing along to The Pogues song Fairytale of New York in the Molly Malone Irish pub in Puerto de la Cruz in the early hours of Friday morning.

The 28-year-old, who is originally from Grimsby, can be seen holding hands with German boyfriend Dennis Kissling as she dances along with her colleagues. 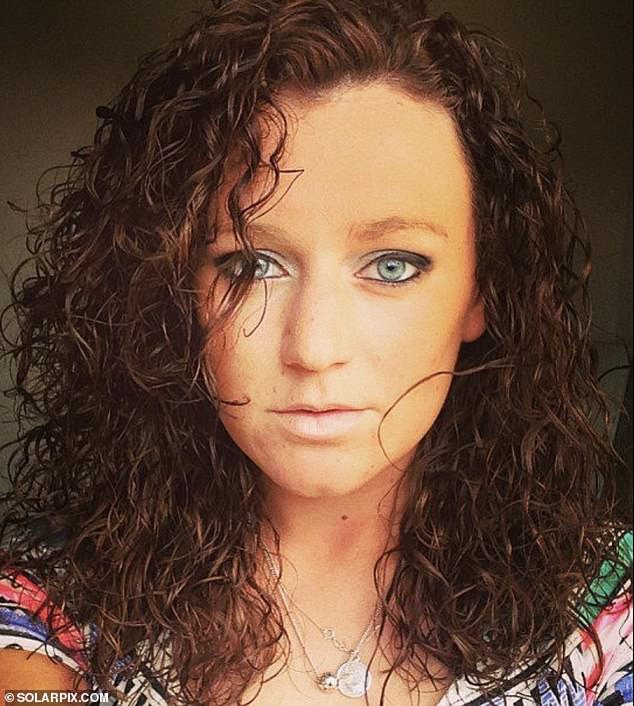 At one point Amy turns to blow a kiss to the camera, as seen in footage obtained by The Sun.

Brendan Reid Spencer, who owns the bar, said Molly arrived with six colleagues around 11pm on Thursday to celebrate a friend’s birthday and listen to live music.

Moments after the footage was taken she left the bar with her boyfriend before they parted ways at the entrance, and she has not been seen since.

Police and coastguard are now scouring the coastline amid fears she may have fallen into the ocean.

Friends and loved ones have described Amy’s disappearance as totally out of character and admitted they are worried.

A Spanish missing persons’ association has also appealed for information about her whereabouts.

A spokesman for Tenerife’s National Police, which is leading the hunt for Amy Louise, confirmed she had been reported as missing.

He said: ‘An investigation is open and we are searching for her but I am not not in a position to specify what work is being done.

‘She was officially reported as missing by a friend on Saturday morning.

‘The information we have is that she was last seen just before 1am on Friday in Puerto de la Cruz.’

A well-placed source said a police force murder squad had been alerted, but described it as a ‘routine move’ in missing people cases and insisted it did not mean investigators had any proof the Brit expat had been the victim of foul play. 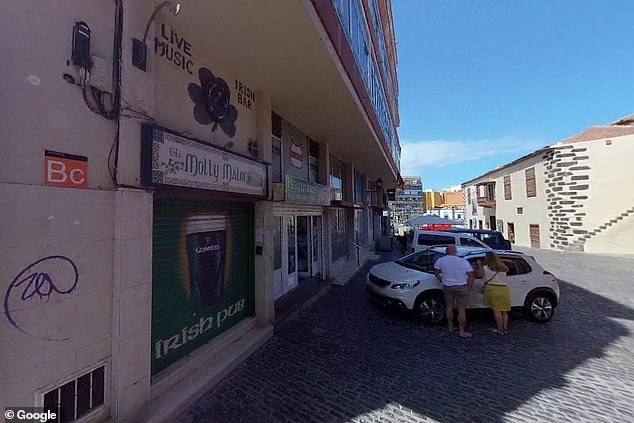 Ms Gerard left the bar (pictured) alongside boyfriend Dennis Kissling shortly after midnight. The pair parted ways at the entrance, and she has not been seen since

Ms Gerard, who lives in Puerto de la Cruz and studied animal behaviour science at the University of Lincoln, has also worked as a marine mammal trainer at a zoo in France.

Ms Gerard, who is around 5ft 8ins tall, with curly blonde hair and blue eyes, was last seen outside Molly Malone bar in Puerto de la Cruz just after midnight on Thursday.

Ms Gerard’s mother Julie and her sister Chloe, both from Grimsby, have flown out to Tenerife along with Chloe’s finance Mike Dolan, 35.

Mrs Gerard was too upset to speak this afternoon.

But Mr Dolan said: ‘We are extremely concerned as this is totally out of character for Amy.

‘Because it is so out of character we flew out to Tenerife as soon as we could to speak to the police and friends.

‘The barman at the pub she was last seen in said she left just before 1am on Thursday but we’re still trying to piece together the events of that night.

‘We’re doing everything we can including trying to see if there’s CCTV that could help and speaking to taxi drivers.

‘We’ve spent the morning in the police station. 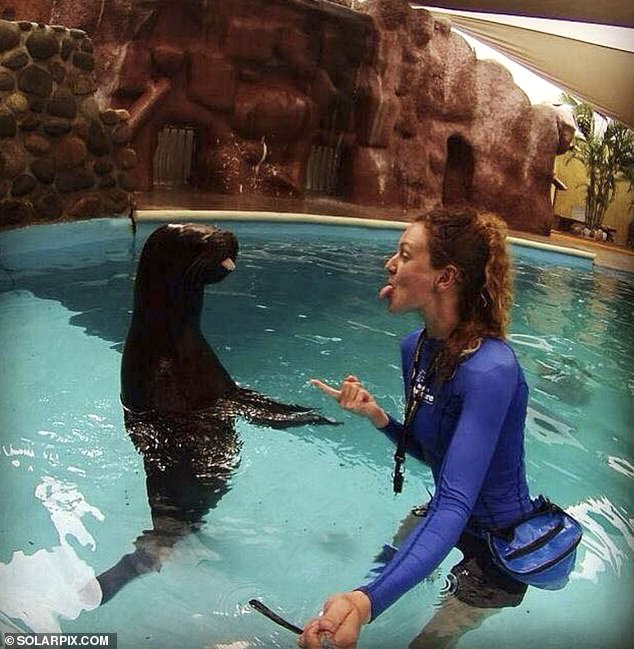 ‘Her friends thought something was amiss on Friday and went to the police station but were told that they should come back the following day if she didn’t turn up at work as scheduled to officially report her as missing.

‘That was what they did when she didn’t show for work on the Saturday. She wasn’t due in to work on the Friday.’

He added: ‘Amy wasn’t a big drinker. She had to be in good shape for her work so like her colleagues who work with animals, she just didn’t do the party lifestyle.

‘We’ve ruled out the idea she might have come out the pub the worse for wear and fallen somewhere on her way home because that was just not Amy.

‘She was with a female friend as far as we understand but we haven’t been able to speak to her yet.

‘We would urge anyone who has seen Amy or has any information on what happened that night or where she might be to contact police.

‘We’re not exactly sure at the moment what police are doing but we know they’re taking it seriously and are looking for her and trying to find out what’s happened.’

Friend Tonette Smith said: ‘Just so everyone knows this is a local lass.

‘Amy has been missing since Thursday midnight. She loves her work and is grounded, she is not flighty.

‘Amy is beautiful inside and outside.’

Ms Gerard is understood to be married to a British personal trainer called Ryan Docherty who is thought to be back in the UK.

The fitness fanatic, from Grimsby, Lincolnshire, has also used social media to urge anyone with information on her whereabouts to call police.

Ms Gerard has been using her maiden surname in recent months – the one featuring on the missing posters in English and Spanish – rather than her married name.

Laura Mumby said alongside a photo of Ms Gerard on a missing poster: ‘If you or anyone you know is going to Tenerife or the Canary Islands soon, please keep an eye out for Amy who has been missing since Thursday. 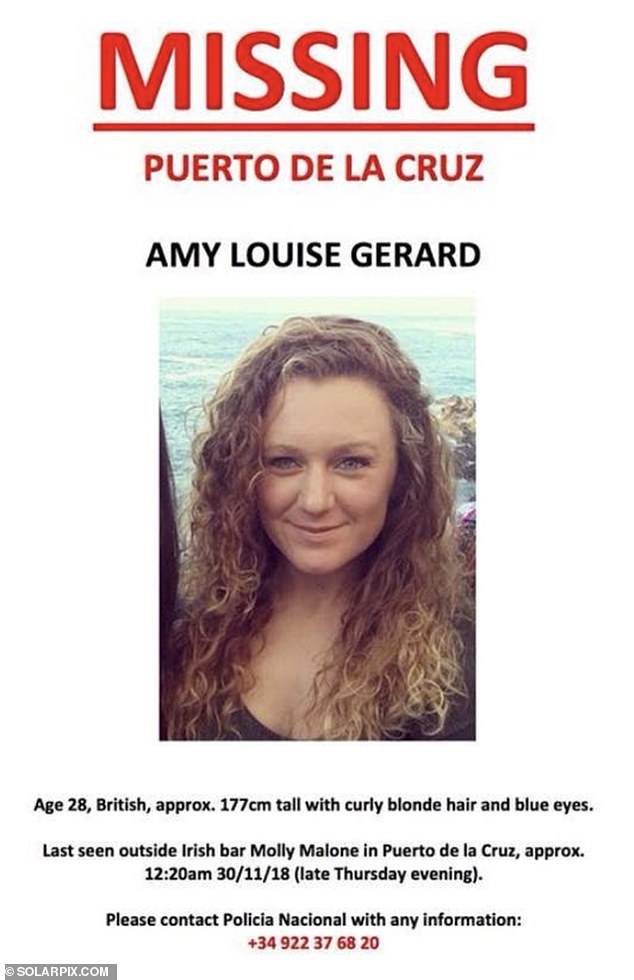 ‘We are all very concerned. This is so out of character.’

Ms Gerard’s university flatmate Natalie Taylor added: ‘Please if anyone knows anything or has seen Amy Louise Gerard can they please get in touch.

‘Friends and family are increasingly worried. Amy was my flatmate at uni and she is amazing.’

Pal Stacey Dawes said: ‘This is not like Amy to go missing. We just want her home safe now.’

Ms Gerard’s mum Julie, who is helping to publicise her daughter’s disappearance, wrote on Facebook: ‘Thanks to everyone for sharing this information.

‘We’re all very worried and need new information. Please contact the police if you’ve seen or heard anything from Amy since Thursday night. We want her found as soon as possible.’

A worker at Loro Parque confirmed Amy worked at the Tenerife marine theme park but said no-one was available for comment.