London: British Prime Minister Theresa May survived a revolt by the hard-line, pro-Brexit parliamentary faction of her Conservative Party.

That will give her some time to try to get her plan for leaving the European Union — the same one that spurred the revolt — through Parliament. 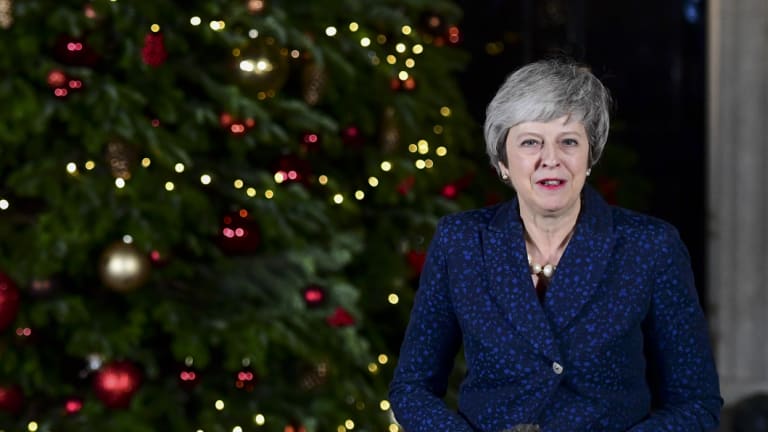 It leaves open the question of whether May will lead future stages of negotiations, when Britain will have to hammer out long-term trading arrangements with the bloc.

That wasn't the only drastic measure May took in pursuit of the clearest possible victory. She also reinstated two Conservative members of Parliament who had been suspended over allegations of sexual misconduct.

Her Brexit deal looks as dead as ever

A vote against May's leadership was effectively a vote against her agreement on leaving the European Union. (Her government is doing little else at the moment.)

So we can now assume that at least 117 members of her party are ready to vote against the plan. Her working majority — including that small Northern Ireland party, which is also strongly opposed to her plans as they stand — is 13. Without help from the opposition Labour Party, whose leaders are angling for an early general election or a second public referendum on EU membership, a crushing defeat would be certain.

May called off a vote on Monday to forestall that outcome, and the arithmetic has not changed. To win over moderates in opposition parties — perhaps a less risky idea now that she's immune to right-wing challenge — she would have to offer a softer Brexit that would preserve more trading ties with the European Union.

But that would mean May crossing the negotiating "red line" that she perhaps considers most important: gaining the power to close Britain's borders to citizens of EU countries.

A trip to Brussels probably won't save her

European leaders will greet any attempt to rewrite the 585-page, legally binding withdrawal agreement with a resounding no. They refuse to abandon a so-called backstop arrangement that at least temporarily keeps Britain in a customs union with Europe to avoid a hard border between Northern Ireland, which is part of the United Kingdom, and Ireland, which is a member of the European Union.

That measure is anathema to the right wing of the Tory party, which regards it as a ruse to permanently render Britain a "vassal state", beholden to the bloc's rules and regulations with no say in them and no plausible way to escape.

While refusing to abandon the backstop, European leaders have said they are willing to offer some assurances to May: something along the lines of a non-binding text saying the backstop arrangement will not be long-lived. But that does not seem likely to placate the most fervent Brexit supporters.

If Parliament does nothing before March 29, Britain's relationship with the European Union will rupture overnight. Banking, trade, travel, food, medicines, the fluid border between Ireland and Northern Ireland — all would be thrown into flux.

The pro-Brexit right wing of the Conservative Party has long dismissed forecasts of chaos and economic dislocation, dismissing them as products of a pro-Europe fear campaign. But their failure to oust May and replace her with one of their own means it's now less likely that Britain will deliberately leave without a deal.

A no-deal exit is still the default outcome. May seems to hope delaying the vote in Parliament, in all likelihood until mid-January, will pressure enough lawmakers into supporting her plan. But many analysts doubt that ploy will work.

The chances are increasing, then, of another option that May has sought to rule out: throwing the question of EU membership back to the public in a second referendum. Doing that would raise another array of questions: What choices would be on the ballot? What if the result is as close as the first?

The only certainty in that scenario is that Britain would have to ask for an extension on the March 29 deadline.