Bolsonaro will check in to a hospital in Sao Paulo on Thursday to prepare for the procedure and will be hospitalised until Saturday or Sunday at the latest, said Leandro Echenique, one of several doctors on Bolsonaro's medical team. 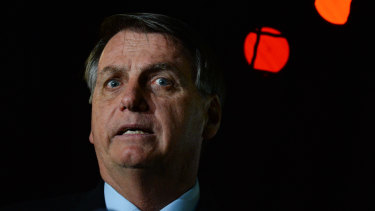 "It is something much simpler and more common than other surgeries", Echenique said.

The president's office did not immediately respond to a request for comment on Echenique's remarks. Plans for the surgery were reported earlier by newspapers Folha de S.Paulo and O Estado de S.Paulo, which cited unnamed sources.

Bolsonaro said in late August that he would undergo a procedure to remove a kidney stone this month, although he later said it was actually a bladder stone.

"I have had it more than five years. It's in the bladder, bigger than a bean. I resolved to take it out, as it is probably hurting the inside of the bladder," he told supporters outside his residence on September 1.

Bolsonaro's health has been a concern since he was stabbed while on the campaign trail in 2018, and he subsequently underwent several surgeries.

Another doctor on Bolsonaro's team, Antonio Macedo, said on Tuesday that the president would undergo the surgery in the coming weeks and that it had nothing to do with his stabbing.

"His stomach is very difficult to open, to take out the intestine and other organs because of multiple surgeries," Macedo said last week. "It's something simple that is a bit more difficult because of his history, but he did a checkup with us last month and his health is perfect."