Boy, 5, dangles dangerously from a drying rack eight floors up before a brave neighbour climbs the wall without a harness to save him

A five-year-old boy has been saved by a courageous neighbour after falling out of the window of his seventh-storey home while being left unattended in China.

The child reportedly became stuck in an outdoor drying rack while looking for his mother by the window.

Footage shows him struggling in air as he dangled down the metal equipment at about 80 feet above the ground. 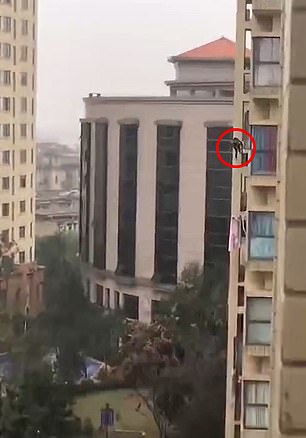 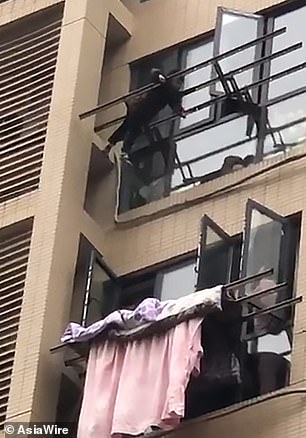 The boy was trapped on an outdoor clothing rack after climbing onto the window sill to look for his mother in China. He had been left home alone by his mother who went out to run an errand

A downstairs neighbour said the rack was stretchable horizontally and the boy could fall through the gap at any moment.

The child was rescued with the joint effort of the neighbours and firefighters.

The accident took place on Saturday afternoon at a high-rise residential complex in Changsha, the provincial capital of Hunan Province.

According to local newspaper site rednet.cn, the boy’s mother, Ms Ye, had left him alone at home at about 4pm to pick up post.

The mother said her son was very obedient and never caused trouble, therefore she decided to run the errand quickly while he was watching TV.

But when she returned home later, she was horrified to see her son hanging outside their window eight floors up while a crowd of onlookers stood in front of their building looking for ways to save the child.

Apparently after Ms Ye left, her son became anxious after failing to find her at home, the article said.

He reportedly locked the door from inside before climbing onto the window sill to look for her mother.

The boy fell out of the window by accident and was trapped in the clothing rack outside. 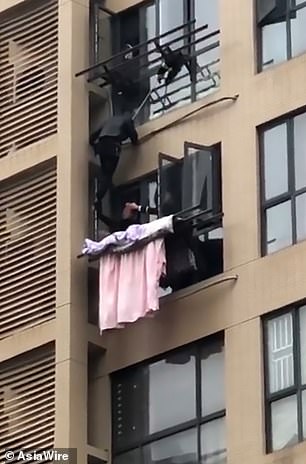 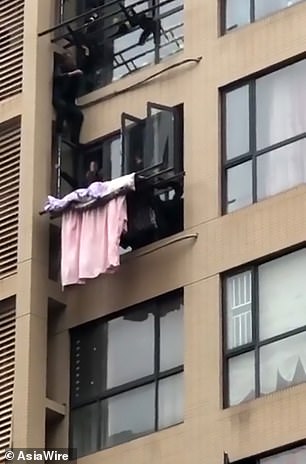 A courageous climbed along the exterior wall of the high-rise building with his bare hands to support the boy. He held the boy from below for around five minutes until firefighters arrived

An eyewitness said the child was initially lying on top of the rack, but as it stretched outwards his body fell through the expanding gap, leaving him dangling in the air.

Upon noticing the accident, the family’s downstairs neighbours immediately put a duvet on top of their clothing rack in case the boy falls.

Another neighbour rushed to the flat underneath’s the boy’s home and climbed out of the window.

The brave neighbour, 51-year-old Ding Guanghui, then slowly scaled the exterior wall of the building with his bare hands until he reached a small ledge.

Mr Ding then carefully sat on the ledge while supporting the boy’s torso from below.

He held the boy for five minutes before firefighters managed to break into the boy’s home and pulled him back to the room from inside.

Ms Ye said she and her husband were grateful to their courageous saviour. She also promised not to leave her son alone at home in the future.

The Good Samaritan remained humble as he said he only did what he should have done under the circumstances.