Boy, 4, uses Siri to call 999 and after his pregnant mother collapsed at home with effects of morning sickness medication

Little Beau Austin told the app to ‘Hey Siri, call an ambulance’ on his mother’s iPhone when she passed out ill.

Mum Jess Austin, 29, fell to the floor due to side effects from her morning sickness medication.

So four-year-old Beau picked up her Apple phone and told Siri: ‘My mummy’s sick.’

Ashley Page, a 999 Emergency Medical Services call-handler with the Welsh Ambulance Service, spoke to Beau and talked him through what to do.

She quickly worked out that the boy was on his own with his mum and switched to a more child-friendly style and technique to get Beau’s home address. 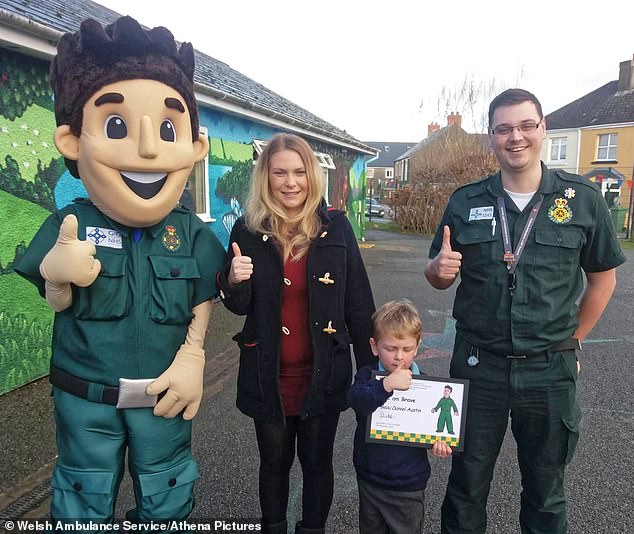 Jess Austin with son Beau and Ashley Page, the operator who took the call and the ambulance mascot Jack after the boy used Siri to call 999

Although Jess recovered briefly to confirm her full address and answer some questions, she fainted a second time and the ambulance service again called on Beau for his help.

Ashley encouraged Beau to call his mum and try and get her to respond, and she came around a second time and spoke to Ashley.

It was while waiting for the ambulance to arrive that Ashley realised Beau used Siri to make the call.

Paramedics rushed to her aid at the family’s home address in Hook, Pembrokeshire.

Jess, who is in the first trimester of her pregnancy, said: ‘I was just really proud of him, without Beau being there, something really awful could’ve happened to me.

‘It was just me and Beau in the house by ourselves so he did really, really well. To use Siri like that is incredible. I didn’t even know you could do that on a phone.

‘He said he saw it done before on the TV.’

The youngster, who loves talking to devices such as Alexa and Siri, managed to tell the call handler that he was four years old and was alone with her.

Jess added: ‘We are so impressed by what he did. We cannot tell you how proud we both are of our amazing little boy.’ 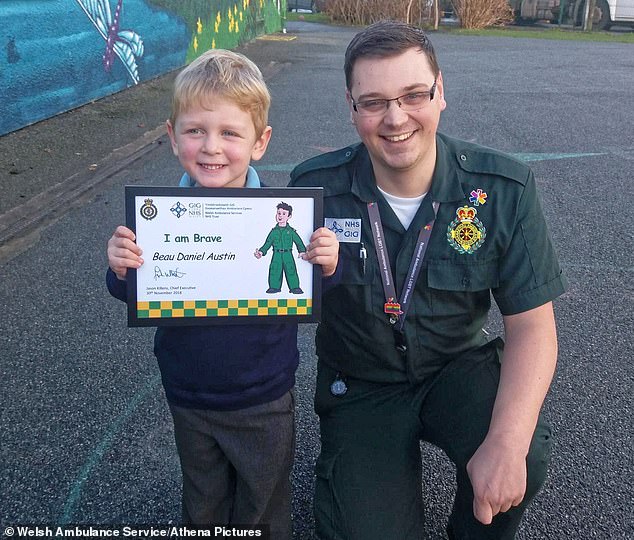 Beau Austin with Ashley Page, the operator who took the call, presenting him his certificate of bravery for his quick-thinking work

Beau was handed a certificate from the Welsh Ambulance Service for his bravery.

Call handler Ashley Page added: ‘We are trained to talk to callers through potential emergencies, and it was Beau’s knowledge of technology, awareness of his address and staying calm that really made a difference and helped his mum and us.’

Headteacher Louise John, of Hook Community Primary School, added: ‘We are all very proud of Beau, and with the support of Welsh Ambulance Service we plan to teach all of our children the importance of knowing their own address and first aid skills.’

To recognise his bravery and clever thinking, Ashley, the ambulance service’s mascot Jack and the Patient Experience and Community Involvement (PECI) team came to Beau’s school in Hook to award him with an ‘I Am Brave’ certificate and goodie bag.

Fiona Maclean, service user manager from Welsh Ambulance Service’s PECI team, said: ‘Beau’s story shows how important it is for children to know their home address, including their postcode ideally.

‘We engage with schools and communities to encourage children to learn their home address and what to do in an emergency.’