Boris Johnson is blasted from all sides over winter lockdown: Labour claim draconian measures have come three weeks too late – while Tories slam PM for panicking and accuse SAGE experts of pressuring ministers into disastrous ‘business-breaker’

Boris Johnson has been slammed as ‘incompetent’ for his disastrous handling of the pandemic as he last night bowed to pressure to put England back into a full lockdown.

In a heavily delayed press conference, the Prime Minister yesterday said he had taken the ‘incredibly difficult’ decision to reimpose restrictions almost as draconian as those seen in March.

He reasoned that harrowing projections laid out by his scientific advisors Sir Patrick Vallance and Prof Chris Whitty of deaths and hospital cases exceeding first wave levels presented a situation ‘no responsible Prime Minister can ignore’.

But the move to a full lockdown from Thursday has been blasted by Labour opponents as ‘too late’, while Tory MPs threatened to rebel, claiming Mr Johnson was being ‘bounced’ into the shutdown by scientists.

Speaking on the Andrew Marr Show, Labour leader Sir Keir Starmer today warned of a serious impact on people’s lives as ‘the price of the Government’s incompetence’.

‘I’m so frustrated at the incompetence of the Government,’ he added.

‘If what they announced yesterday had been announced when I said it should have been – two or three weeks ago – we could have had the lockdown and schools shut because of the natural break of half-term and people will be waking up this morning and thinking “how on Earth did it get to this?” 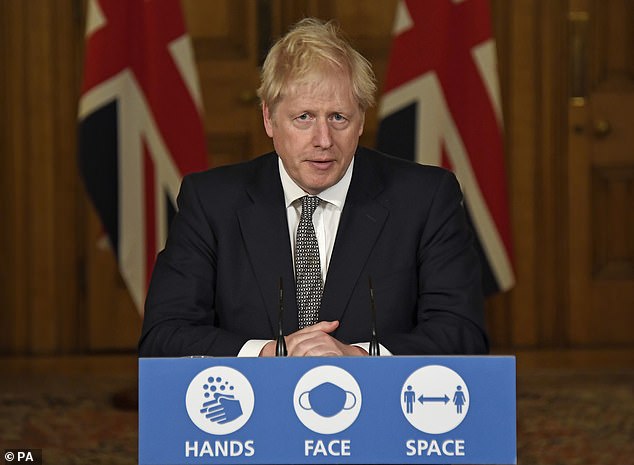 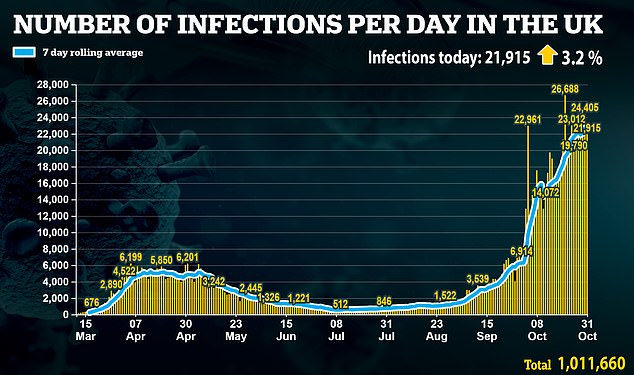 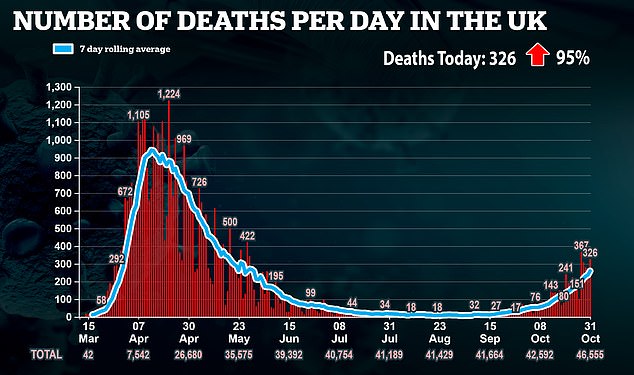 ‘The Government was too slow in the first phase of the pandemic and now it’s being too slow again and there’s a cost to this. That’s why the lockdown will now go on longer.’

He called on Boris Johnson’s Government to use England’s four-week national lockdown period to fix the issues around NHS Test and Trace, adding if this was not done, “December 2 will be a review date not an end date”.

But as was speaking on the BBC,  Cabinet minister Michael Gove admitted to Sky News’ Sophy Ridge On Sunday that lockdown could be extended beyond December 2 if coronavirus infection rates do not significantly fall.

Sir Keir reiterated that Labour had called for a ‘circuit-break’ lockdown three weeks ago, but had been ignored by the government at the.

‘Now at that stage the Government rejected it out of hand, ridiculed it, now only to do precisely the same thing – but there’s a cost to that delay.

As England braces for a second national lockdown: 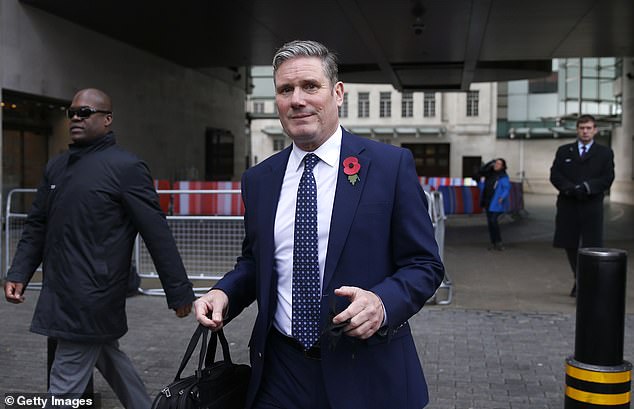 Speaking on the Andrew Marr Show, Labour leader Sir Keir Starmer today warned of a serious impact on people’s lives as ‘the price of the Government’s incompetence’ 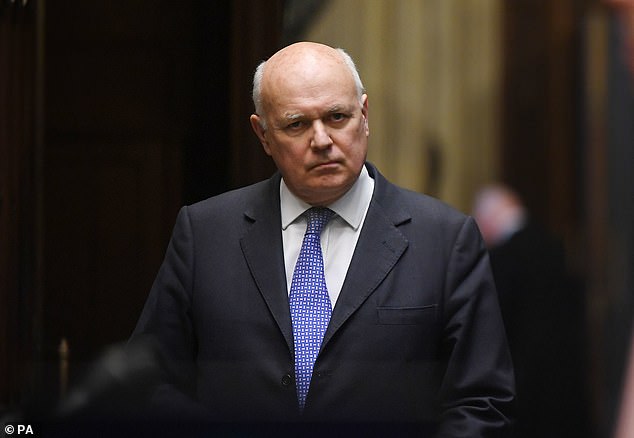 Former Tory leader Iain Duncan Smith said the government was ‘giving in to the scientific advisers and marching England back into another nationwide lockdown’.

‘The lockdown now will be longer, it’ll be harder, we’ve just missed half-term and there’s a very human cost to this.’

The Prime Minister’s decision has also enraged backbench Tory MPs who are said to be planning a Commons revolt when the restrictions come to a vote in Parliament.

Writing in the Sunday Telegraph, former Tory leader Iain Duncan Smith said the government was ‘giving in to the scientific advisers and marching England back into another nationwide lockdown’.

He added that hundreds of businesses had not yet fully recovered from the effects of the first national lockdown, and forcing them to close up again would be a ‘body blow to the British people’.

‘The way that the Government’s Scientific Advisory Group for Emergencies (Sage) has pressurised the Government into taking this decision has been unprecedented,’ he writes.

‘Normally, advisers advise and ministers decide. Yet that system has  broken down with Sage believing its advice to be more like commandments written on stone.’

Last night’s rushed press conference is believed to have been brought forward from Monday after details of a national lockdown were leaked in advance.

In a WhatsApp message seen by the PA news agency, Mr Johnson wrote to MPs to apologise to them and assure them that Downing Street had not informed journalists of the measures.

But furious anti-lockdown Tories are chomping at the bit over the new shutdown which they believe will leave the already-weak UK economy in tatters and potentially tear the Party apart.

Sir Robert Syms, an ex-Tory whip, suggested that No10 had not properly ‘audited progress’ made by the three-tier system which sees restrictions with varying degrees of severity placed on individual regions.

One MP told Matt Chorley of Times Radio that the Prime Minister is on ‘borrowed time’ and ‘totally inept’, while another reportedly said: ‘I think it could be his Suez.’

Former minister Sir Desmond Swayne said he did not support the new lockdown in England because of the ‘disastrous’ economic consequences.

He told Sky News it would take a ‘huge amount of persuasion for me to vote for this disastrous course of action’.

‘I’m worried about the disastrous consequences for unemployment, for wrecked businesses, for years of underinvestment while we try and pay this off, when the reality is that the number of deaths for the time of year is normal and expected.

‘It is very difficult to believe scientists who tell you that there is a deadly pandemic taking place when there are no excess deaths beyond the normal five-year average.’

The government is expected feel the heat from its ‘redwall’ MP in the Commons to when the measures come to a vote on Wednesday, ahead of implementation on Guy Fawkes night.

Much of the fury around the announcement has been attributed to the chaotic set to the press conference which was delayed a total of four times.

But viewers were left searching for Mr Johnson when it was abruptly moved back to 5pm, with a half-hour news special was put in at 4.30pm, hosted by Reeta Chakrabarti. 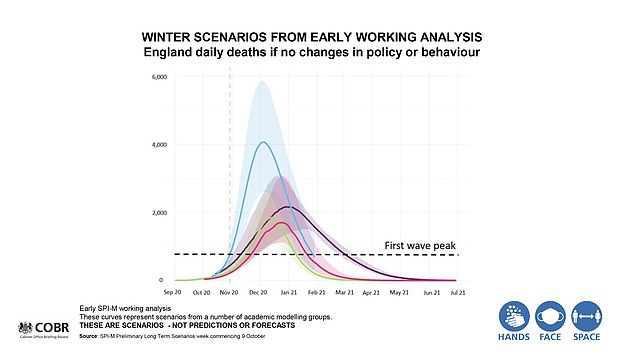 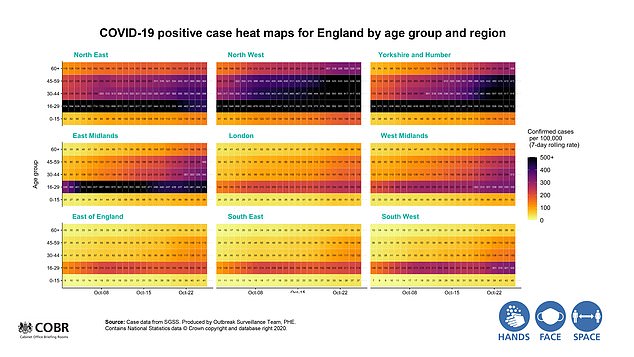 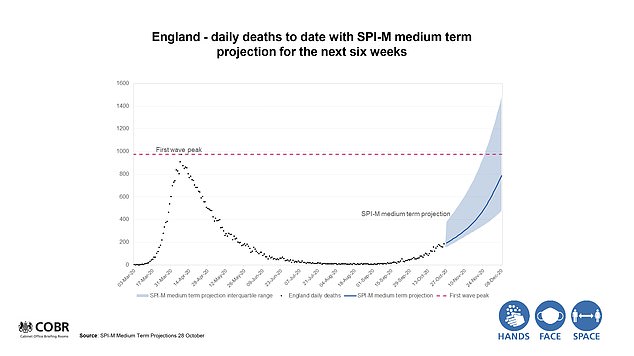 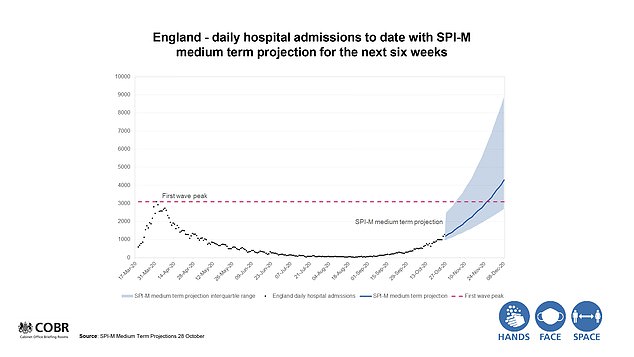 Frustrations grew as it became clear the event wouldn’t happen before 6pm, pushing into England’s Six Nations-winning match against Italy, and endangering the start of Strictly Come Dancing at 7.10pm.

Broadcaster Matt Chorley warned the government, saying: ‘Of all the highly dangerous things this Government has done, f***ing about with the start of Strictly seems the most risky.’

Sources on the BBC1 show said that at one point it was expected that the show would be moved to a later day as no information had come from the scheduling department.

When Mr Johnson and his advisers finally took to the podium it was 6.45pm, with tense questions cut off on BBC1 to avoid cancelling Strictly.

But Mr Johnson faced further scorn when Matt from Plymouth asked the press conference whether ‘quieter parts’ of the south west like Cornwall, where the infection rate remains low would have to go under lockdown ‘in solidarity with the rest of the country’.

Mr Johnson responded by saying that while the incident rate in the area was low, ‘it is growing and we need to tackle it now’. 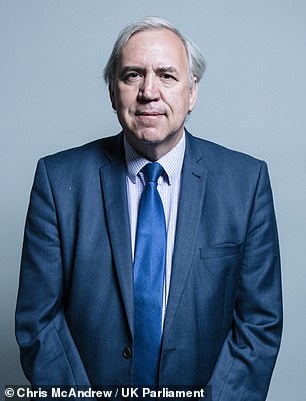 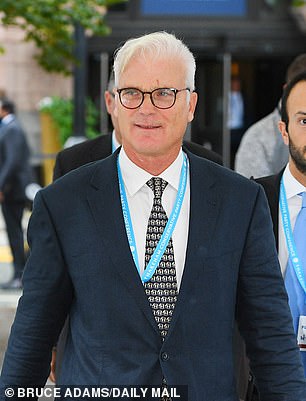 But furious anti-lockdown Tories are chomping at the bit over the new shutdown which they believe will leave the already-weak UK economy in tatters and potentially tear the Party apart. Left: ex-whip Robert Syms, right: Former minister Sir Desmond Swayne

In south-west and eastern regions of England, coronavirus is spreading at half the rate of the national average, and some local leaders feel blanket restrictions mean they are unfairly ‘paying the price’ for rising cases elsewhere.

A cabinet councillor for Cornwall, which has the lowest coronavirus case rate in the country after the Isle of Wight, said the Government should have enforced a shorter circuit-breaker lockdown earlier to limit damage to local economies.

Cornwall Council’s Tim Dwelly said: ‘For Cornwall, whose economy has been hit harder than most, this is a bitter pill to swallow.

‘The economic impact of a four-week lockdown will be greater than it needed to have been for a shorter circuit-breaker of a fortnight.

‘Our businesses and workers now face an extremely challenging winter and we will be lobbying hard for urgent financial hardship support for them.’

Kim Conchie, chief executive of Cornwall Chamber of Commerce, also said he was concerned about the survival of smaller businesses and those they employ, given the furlough extension had been announced ‘so late in the day’.

He said: ‘I think people in Cornwall will be disappointed that we are paying the price for insouciance elsewhere but worried that our NHS provision has been mentioned nationally as the first place to come under pressure if cases rise.

‘Additionally, how on Earth are businesses going to cope with Brexit a month later?’

Plymouth City Council leader Tudor Evans agreed the Government’s ‘failure’ to enforce a circuit-breaker lockdown over the half-term holiday meant some businesses will be ‘devastated’ by a longer lockdown now.

He said while he is supportive of measures aimed at controlling the virus, he is not confident the lockdown will work due to a lack of funding for local authorities and because the track and trace system is ‘completely broken’.

‘The message of furlough is a relief, the Government finally heard what everybody was telling them, but for some people who have been made redundant in the last month the damage is already done,’ he said.

Mr Tudor added Plymouth City Council had only been given enough money for 157 payments of the one-off £500 handouts for people on low incomes who are asked to isolate and will lose work as a result.

Mr Tudor said that for a city of more than 200,000 people, this support will ‘disappear in a matter of days’.