Mr Navalny is currently in a coma in a Berlin hospital where doctors said they had found evidence he had been poisoned.

Allies of Mr Navalny, a fierce critic of Russian president Vladimir Putin, have claimed the Kremlin is behind his illness – claims which have been rejected by Moscow.

Mr Johnson today became the latest world leader to call for an official probe into the matter as he said the UK will help ‘ensure justice is done’. 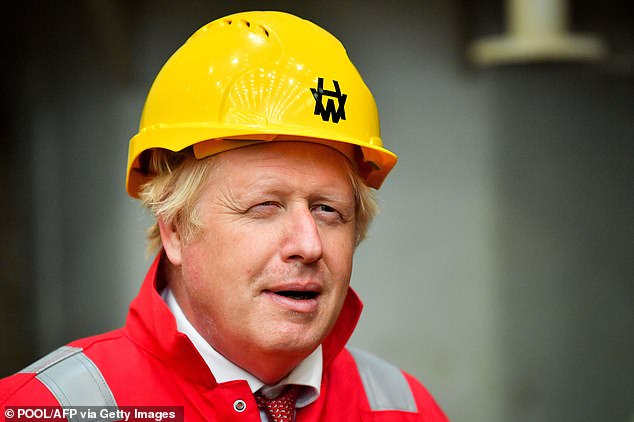 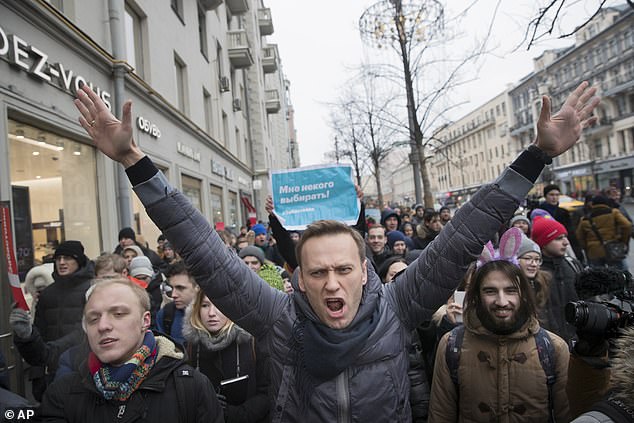 Mr Navalny, pictured during a rally in Moscow in January 2018, is a fierce critic of Vladimir Putin

The Prime Minister tweeted: ‘The poisoning of Alexey Navalny shocked the world.

‘The UK stands in solidarity with him & his family. We need a full, transparent investigation into what happened.

‘The perpetrators must be held accountable & the UK will join international efforts to ensure justice is done.’

Medical tests carried out by German doctors indicated Mr Navalny had been poisoned.

In a statement the hospital revealed extensive tests pointed to ‘intoxication by substances from the group of active substances called cholinesterase inhibitors’.

Further analysis and tests to identify the exact substance which Mr Navalny was exposed to are ongoing.

‘The outcome remains uncertain but long-term effects, especially to the nervous system, could not be ruled out’, the hospital said.

The Kremlin has dismissed claims that it was involved in the alleged poisoning of Mr Navalny.

Kremlin spokesman Dmitry Peskov said: ‘These accusations absolutely cannot be true and are rather an empty noise. We do not intend to take it seriously.’

He added: ‘If a substance (that caused the condition) is found, and if it is determined that it is poisoning, then there will be a reason for an investigation.’

Mr Navalny fell ill on a flight back to Moscow from Siberia last Thursday, with his supporters of the belief that he drank tea laced with poison.

He was taken to a hospital in the Russian city of Omsk after the plane made an emergency landing.

He was then transferred by air ambulance to the Charite hospital in Berlin at the weekend.

Cholinesterase inhibitors act by blocking the breakdown of a key chemical in the body, acetycholine, that transmits signals between nerve cells. Mr Navalny is being treated with the antidote atropine.

The inhibitors are a broad range of substances that are found in several drugs, but also pesticides and nerve agents.

Mr Navalny’s wife, Yulia Navalnaya, has been visiting her husband every day and made no comment to reporters when she arrived yesterday.

Chancellor Angela Merkel personally offered Germany’s help in treating Mr Navalny and, along with other European officials, has already called for a full Russian investigation.

She tweeted: ‘It was obvious that the crime would not be properly investigated and a culprit found. However, we all know perfectly well who that is.’