A bomb discovered in a parked vehicle in Londonderry was an attempt by the New IRA to murder police officers, detectives said today.

The device, which police said ‘would have killed or maimed anyone near it’ was found after up to 80 officers took part in an operation targeting dissident republicans.

Fifteen families had to leave their homes after the discovery of the device in Creggan Heights, but they have since returned home after it was made safe.

Journalist Lyra McKee, 29, was murdered by the New IRA in the same area in April as she observed dissident rioting. 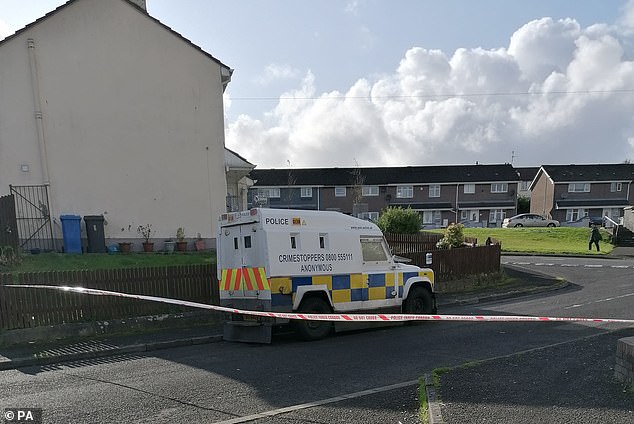 Police at the scene in Creggan Heights, Londonderry, after residents were evacuated when a suspicious device was found in a house 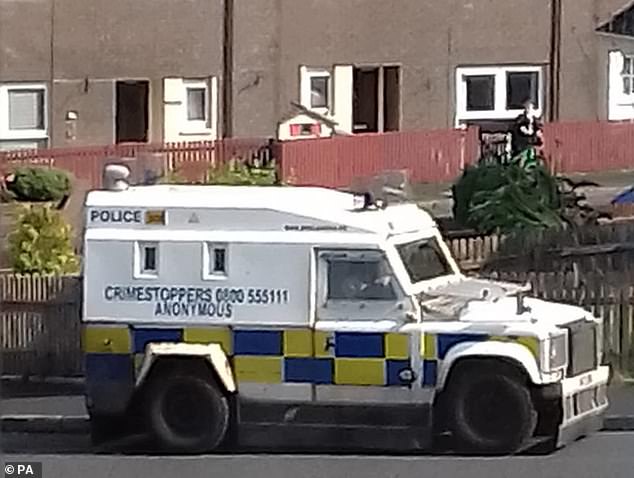 The discovery came as more than 40 petrol bombs and other missiles were thrown at police during the security search.

Police said a crowd of between 60 and 100 young people confronted officers and at least two of the young people suffered burn injuries when they tried to attack the police cordon with petrol bombs. No police officers were injured.

ACC Hamilton said officers believed the bomb was to be used against a police patrol in the area. 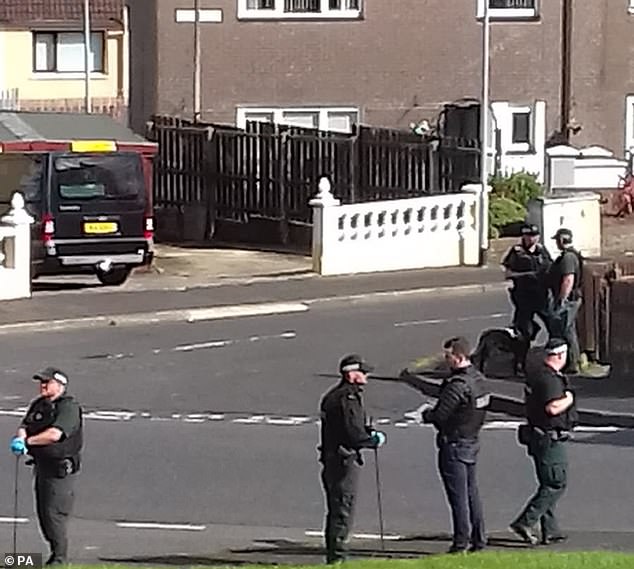 He said: ‘The bomb would have killed or maimed anyone near it when it detonated.

‘By bringing a viable bomb into the community they have again proved that have no regard for the lives of anyone living in Creggan.

‘Once again they exploited some of the young people in the community to attack police and have brought disruption and misery to families.’

Ms McKee was shot dead during rioting in Creggan in April while standing near a police 4×4. 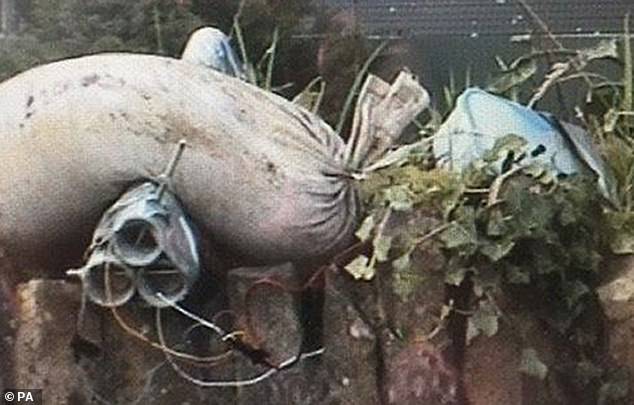 Pictured: The mortar bomb that a passer-by discovered on a wall in Strabane, County Tyrone, on Saturday morning 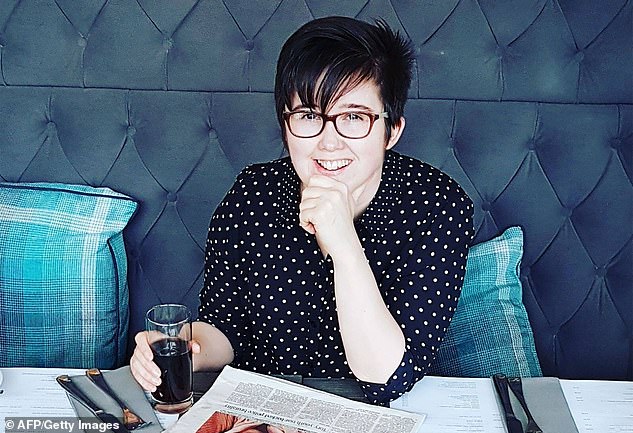 The New IRA later said its members had murdered the 29-year-old, who was shot in the head when a masked gunman fired towards police and onlookers.

Yesterday’s police searches were launched after a dissident republican mortar bomb was recovered in Strabane, Co Tyrone, on Saturday.

The mortar, which was positioned close to a family home, was aimed at the town’s police station.

Who are the New IRA?

The New IRA is the biggest of the dissident republican groups operating in Northern Ireland.

It has been linked with four murders, including PC Ronan Kerr, who was killed by an under-car bomb in Omagh in 2011.

The group is also linked to the deaths of prison officers David Black, who was shot as he drove to work at Maghaberry Prison in 2012, and Adrian Ismay, who died in 2016 after a bomb exploded under his van outside his home in east Belfast.

The New IRA is believed to have been formed between 2011 and 2012 following the merger of a number of smaller groups, including the Real IRA – the group behind the 1998 Omagh bomb.

It is strongest in Derry, north and west Belfast, Strabane in Co Derry, Lurgan in Co Armagh, and pockets of Tyrone.

This year the group was responsible for a car bomb outside the courthouse in Bishop Street, Derry.

The explosives-laden car was left on the city centre street on a Saturday night in January, and scores of people, including a group of teenagers, had walked past before it detonated.

The New IRA also claimed a number of package bombs posted to targets in London and Glasgow in March.

It was the seventh attempted murder bid against the security forces in Northern Ireland this year.

Mr Hamilton described the operation as ‘complex’ as he condemned those indulging in disorder.

‘The focus of this operation is ensuring the people of Creggan are safe. However, it is concerning to see significant numbers of young people on the streets, late into the night, throwing petrol bombs and other missiles at officers in the area,’ he said late on Monday night.

‘The reality is this type of disorder contributes to the complexity of the policing operation and presents a real risk of injury to those involved.’

‘There is absolutely no justification for the actions which serve no purpose other than to put people at risk of serious harm and make the situation worse for local residents trying to get on with their lives, and they should stop now,’ she said.

SDLP leader Colum Eastwood appealed for calm in the area.

‘Police officers came into Creggan today to take bombs out of the hands of those who are trying to murder innocent people in our communities, like those responsible for the mortar in Strabane,’ the Foyle MLA said on Monday night.

‘The brutal and sustained attack that officers have come under while trying to make our community safe is disgusting. Young people in this community are being manipulated and are risking their futures as a result. I would urge parents to contact their children and take them out of harm’s way.

‘People in this community will not be held to ransom by those who want to hold us all back.’