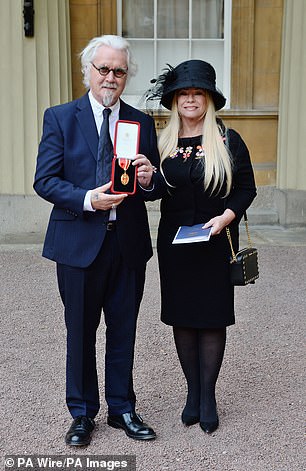 Sir Billy Connolly has revealed that he’s stopped using medicinal marijuana as he just got ‘stoned’ and that having Parkinson’s disease has changed his relationship with his wife as she’s become ‘more like my nurse.’

The comedian, 76, who was diagnosed with the degenerative illness in 2013, said the condition has become more manageable but he struggles to get out of bed.

When asked if his illness had put a strain on his marriage of almost 30 years to Pamela Stephenson, he said: ‘No, not at all. It’s changed it.

‘She’s more of my nurse now. She’s very good to me. She makes my breakfast, then she does my pillows at night.

‘I make the dinner, though she has to help me to chop up wee things like garlic.

‘When my daughters come and live with me they help me do all the chopping and slicing. I’m a follower of Madhur Jaffrey. I make quite complicated Indian things.’

Speaking to the Radio Times, Sir Billy said: ‘When I first got it, Pamela had to help me in and out of chairs. That’s over, but I have trouble getting out of bed.

‘When I’m in hotels it takes me a while to get comfortable. Getting in and out of cars can be difficult. It’s made my life kind of peculiar, but there’s no pain. The shaking, that’s by far the worst part.’

The comedian also said he’s stopped using medicinal marijuana to handle the symptoms of his condition.

He said: ‘I just got bomb happy. Just stoned. It was quite pleasant, but I don’t want to do that every day.’ 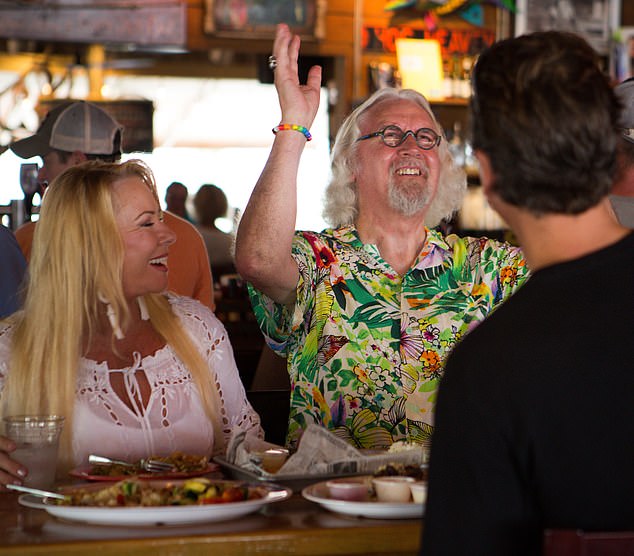 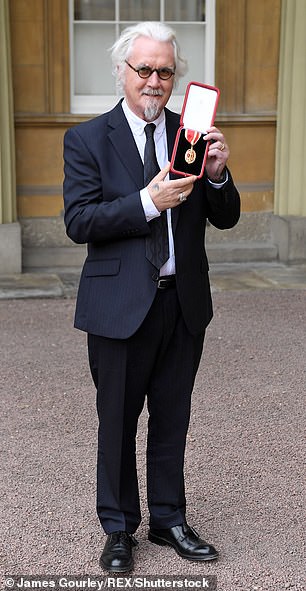 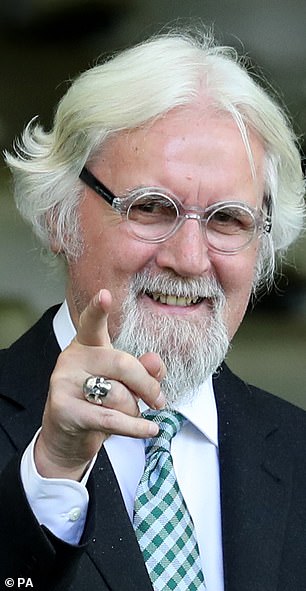 Connolly has also revealed that he won’t be hitting the road with a live stand up tour again after more than 50 years in the entertainment industry, reports the Guardian.

And Sir Billy said he ‘can’t see the point’ of going to therapy groups with fellow Parkinsons sufferers.

‘You see folk who are further on than you and think, ‘I’m going to end up like that.’ These little groups, they’ve got a social-worker vibe about them. I can’t be part of that. I won’t be defined by it.’

But the comedian said he doesn’t think about death because it is ‘very dangerous’ to dwell on your mortality. It becomes your reality, and you feel duty bound to pay attention to it.’

The star moved from New York to Florida after his diagnosis to escape ‘slippery sidewalks’ as his balance is affected by the illness.

Connolly also hit back at TV presenter Michael Parkinson after he claimed earlier this year that the comedian’s brain had ‘dulled’ due to his battle with Parkinson’s. 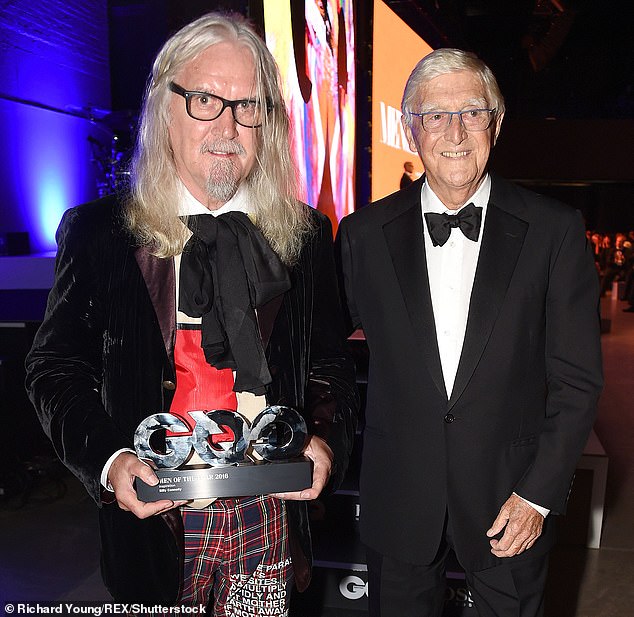 Sir Billy Connolly (left) hit back at Sir Michael Parkinson (right) in a recent interview after the veteran broadcaster said the comedian’s battle with Parkinson’s had ‘dulled his brain’. They had run into each other at the GQ Men Of The Year Awards (pictured) 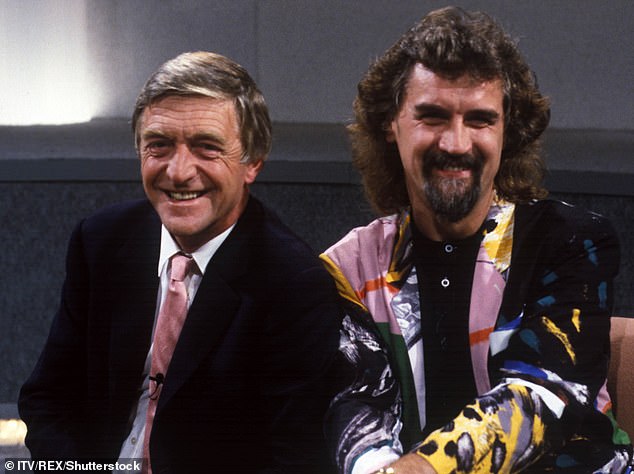 Sir Michael, 83, said there was a ‘sad and awkward’ moment during an awards dinner where Sir Billy ‘didn’t recognise him’ and put the encounter down to the disease’s effects.

But Sir Billy, 76, said he had no idea what Sir Michael was talking about and aimed a swipe at the broadcaster over his adverts for ‘over-50s insurance’ for Sun Life.

WHAT IS PARKINSON’S? THE INCURABLE DISEASE THAT STRUCK BOXER MUHAMMAD ALI

Parkinson’s disease affects one in 500 people, and around 127,000 people in the UK live with the condition.

It causes muscle stiffness, slowness of movement, tremors, sleep disturbance, chronic fatigue, an impaired quality of life and can lead to severe disability.

It is a progressive neurological condition that destroys cells in the part of the brain that controls movement.

Sufferers are known to have diminished supplies of dopamine because nerve cells that make it have died.

There is currently no cure and no way of stopping the progression of the disease, but hundreds of scientific trials are underway to try and change that.

The disease claimed the life of boxing legend Muhammad Ali in 2016.

Speaking to the Times, Sir Billy said: ‘It was two years since I’d seen him and that occasion was the GQ dinner and I did really well, so what he was talking about I’ll never know. He’s been selling funerals too long.’

He added: ‘The thing that got me about it was what if it was true? It’s still a shitty thing to do.’

He told show host that Sir Billy had asked him how long they had known each other for, which led him to speculate over whether he recognised him at all.

During the show Sir Michael said: ‘The sadness of Billy now is that wonderful brain is dulled.’

Speaking to the Radio Times Connolly responded to Parkinson’s comments about him, saying: ‘He thought I’d lost track, mentally, but I never remember what year anything was.

‘These Yorkshiremen, I don’t think they apologise much. I wasn’t disappointed, it just made my life a bit difficult. People feeling sorry for me, I don’t like that.’

Sir Billy was a regular guest on Sir Michael’s chat show which ran from 1971 to 2007, before he quit to focus on his autobiography and other projects.

Despite his condition, the Scot has continued to work on travel programmes and his most recent will be shown on ITV on December 13.

Billy Connolly’s Ultimate World Tour looks back on his previous globe-trotting exploits, from dancing naked in the Orkneys to marvelling at the Grand Canyon. 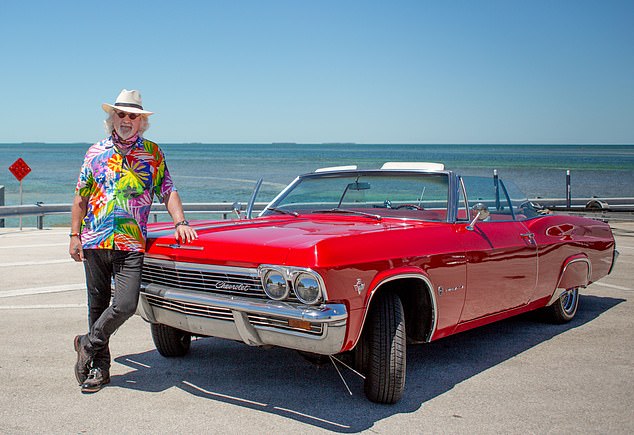 The comedian has a new travel show on ITV in December called Billy Connolly’s Ultimate World Tour (pictured), where he will reflect on 25 years of globe-trotting

But he has confirmed this will be his last ‘travelogue’ because he finds them too tiring, which is also the reason he will not perform another comedy tour, although he has not ruled out one-off specials.

Sir Billy also said he hopes there will not be another world war with ‘fascism’ on the rise around the world.

The Scottish star said of Donald Trump: ‘His rise is part of an international thing. It’s happening everywhere. I think it’s called fascism. They can call it white nationalism if they like, or alt-right, but it’s that Hitlerian lie-telling.

‘Mocking the press, saying they’re the enemy of the people. It’s kind of frightening.’ ‘Let’s wait until his time’s up. It will happen. Let’s just hope there isn’t a world war before that.’