Washington: Bernie Sanders' presidential campaign has collapsed under the weight of its own fantasies.

After his poor performance on Tuesday night (Wednesday AEDT) it is clear that the 78-year-old democratic socialist will not be the Democratic Party's nominee. Joe Biden, the former vice-president, will face off against Donald Trump in November. 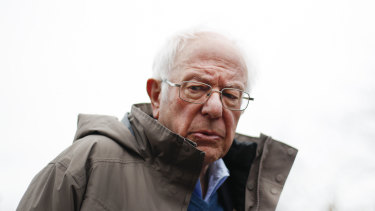 After leading in the early contests, Bernie Sanders’ presidential hopes are dimming. Credit:AP

Sanders' theory of victory was that his vision of a political revolution would reshape the electoral map – not just in the Democratic primary, but the general election as well.

His ambitious progressive agenda and grassroots campaigning machine were supposed to drive young voters to the polls in unprecedented numbers. His economic populism was supposed to appeal to the white working-class voters who swung to Donald Trump in 2016.

The problem is that reality didn't match the theory.

While some of Sanders' more conspiratorial supporters will blame the "Democratic establishment" for stealing the nomination from him, the truth is more prosaic.

His voting coalition, while deep, was not broad enough to win the Democratic nomination – except in an overcrowded and fragmented field.

When the race narrowed to a clear two-person choice – Sanders versus Biden – his frontrunner status evaporated. 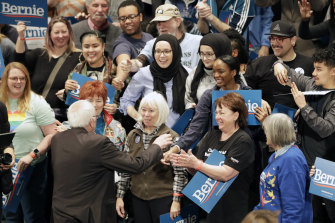 Sanders speaks to his supporters during a rally in St Louis.Credit:AP

The results show that organisation and enthusiasm aren't everything in politics. Sanders easily drew the biggest and most fired-up crowds to his rallies, and his campaign apparatus was the most impressive.

That doesn't change the fact that voters, no matter how enthused they are, can only vote once.

Biden's rallies have been far more sedate and until recently his campaign was anaemic and underfunded. But Democratic voters know him, they like him and, most importantly, they believe he has the best chance of defeating Trump in a general election.

Sanders has been hugely influential in recent years moving the Democratic Party to the left. It's a role he can continue to play in the future, but it won't be from the White House.