Ben Roberts-Smith asked his wife to lie about an affair he had with another woman, a court has heard, amid revelations the former Australian soldier redacted information from documents to be sent to news outlets before a defamation trial.

Mr Roberts-Smith, a former Special Air Service soldier and Victoria Cross recipient, is suing The Age and The Sydney Morning Herald over reports he allegedly committed murder on deployments to Afghanistan and that he punched his mistress in the face in Canberra. 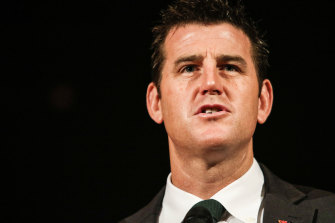 He denies the allegations and says the reports are defamatory because they portray him as a criminal.

The news outlets are defending the claim on a truth defence. The defamation trial is to start next year.

On Monday the Federal Court was told that without its permission Mr Roberts-Smith redacted information from documents before they were sent to the news outlets.

The court heard that among the papers was a documents from Mr Roberts-Smith's wife, Emma, in which she said her husband asked her to lie and say that they were separated at the time of the affair.

But the other woman, referred to as Person 17, alleges she and Mr Roberts-Smith had an affair between October 2017 and April 2018 and that he punched her hard to the left side of her face when the pair left a function at Parliament House in March 2018.

Barrister Lyndelle Barnett, appearing for the news outlets, told the court on Monday the information in the affidavits raised questions about the credibility of Mr and Ms Roberts-Smith, which could be an issue at trial. Ms Roberts-Smith is expected to be called as a witness for her husband.

Bruce McClintock, SC, appearing for Mr Roberts-Smith, said the material was redacted from the documents because it was "deeply personal" and irrelevant to the allegations at the centre of the defamation trial.

But Ms Barnett said a party didn't have the right to redact information without a court's permission.

She said she was conscious of the sensitivities surrounding the case and conceded some redacted information might be irrelevant but suggested the documents be released only to lawyers for The Age and The Sydney Morning Herald.

In response, Mr McClintock said his client opposed the disclosure of the information "including to lawyers for hostile parties" and that it would be unfair to Mr Roberts-Smith if disclosed.

Mr McClintock applied for Justice Anthony Besanko to rule on the matter. The judge will do so at a later date.

The Age and The Sydney Morning Herald have also alleged that Mr Roberts-Smith was involved in multiple unlawful killings as an Australian soldier in Afghanistan, including that of Ali Jan, a farmer who in 2012 was kicked off a cliff in Darwan while handcuffed and was then shot dead.

Mr Roberts-Smith is also alleged to have ordered soldiers in his command to shoot dead detained Afghan men.

The Australian Federal Police is investigating Mr Jan's death and, the court has heard, considers Mr Roberts-Smith a suspect. The AFP has interviewed Mr Roberts-Smith and has obtained eyewitness accounts implicating him in war crimes. No charges have been laid.