Belarus leader Alexander Lukashenko’s regime ‘could fall within two weeks’, presidential hopeful predicts as EU is urged not to recognise his election win

Valery Tsepkalo was barred from running against Lukashenko so his wife, Veronika, took up the mantle along with two other women – including leading figure Svetlana Tikhanouskaya.

The European Union has said that the polls were ‘falsified’ to furnish Lukashenko with 80 percent of the vote and a sixth term in office and the EU is meeting today to discuss sanctions. 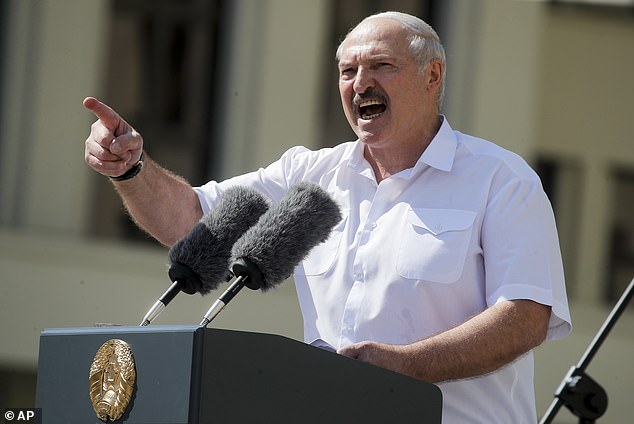 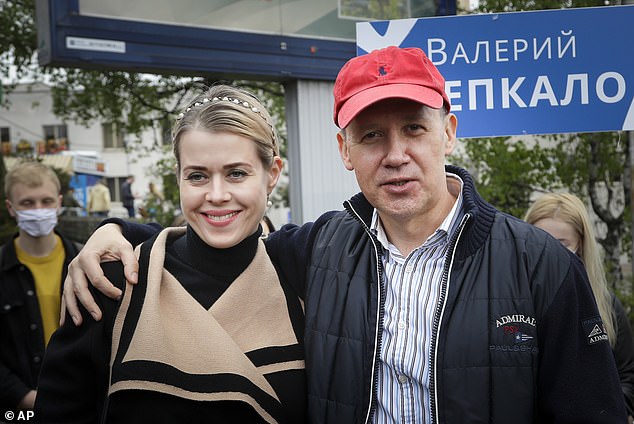 Valery Tsepkalo, a former ambassador to the United States and founder of a successful hi-tech park, hugs his wife Veronika, as he speaks to the media in Minsk, Belarus, in May. Mr Tsepkalo fled to Moscow when he was barred from the election while Veronika remained to campaign, joining forced with two other women 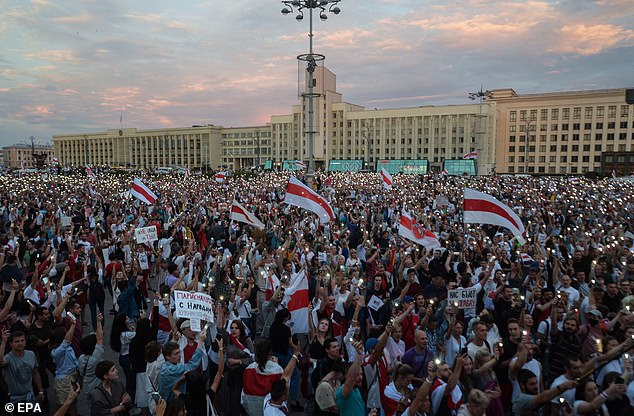 People attend a rally in support of the Belorussian Opposition to demonstrate against police brutality and the presidential election results in Minsk, Belarus, last night

A Russian government jet used to carry senior government officials, including the head of the FSB security service, has made a quick flight to Belarus and back, landing in Moscow in the early hours of Wednesday, flight tracking data shows.

Tracking data showed the plane, a Tupolev Tu-214 which is also a command and control centre, flew to Minsk from Moscow on Tuesday before landing back in Moscow in the early hours of Wednesday morning.

Attention is firmly focused on how Russia will respond to the biggest political crisis facing an ex-Soviet neighbour since 2014 in Ukraine, when Moscow intervened militarily after a friendly leader was toppled by public protests.

Mr Tsepkalo told Sky News: ‘He would like to pacify the electorate, to pacify the demonstrators, the people that go out to streets. He is a liar.’

Asked how much longer the strongman could cling to power, Mr Tsepkalo said: ‘Maybe a couple of weeks. Maximum a couple of months.

‘That is the maximum that the Belarus public would offer him. That’s my feeling.

‘The situation is evolving so fast he cannot run the country because he absolutely lost his authority, he lost his popularity and the only thing that is rising now in Belarus is the hatred of him.’

Mr Tsepkalo, an IT entrepreneur and former ambassador to the United States, went into self-imposed exile in Moscow last month with his two children. His wife remained to fight the election but has since joined him in Russia.

The EU is hoping its emergency talks today will ratchet up pressure on those linked to the brutal crackdown on protesters after the election.

In a letter inviting leaders to the teleconference, EU Council President Charles Michel said that ‘what we have witnessed in Belarus is not acceptable.’ He said the ‘violence against peaceful protesters was shocking and has to be condemned. Those responsible must be held to account.’ 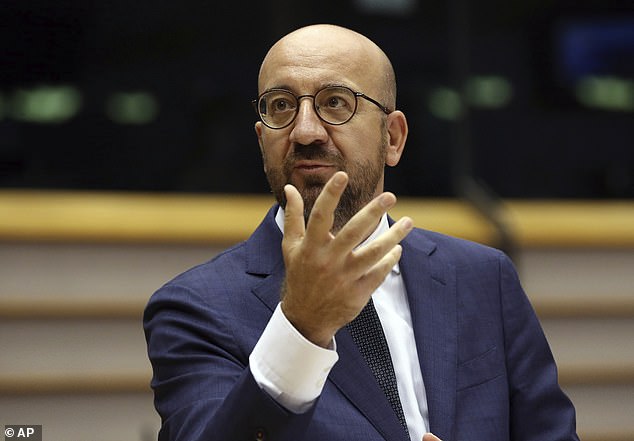 In a letter inviting leaders to the teleconference, EU Council President Charles Michel (pictured last month) said that ‘what we have witnessed in Belarus is not acceptable.’ He said the ‘violence against peaceful protesters was shocking and has to be condemned. Those responsible must be held to account’ 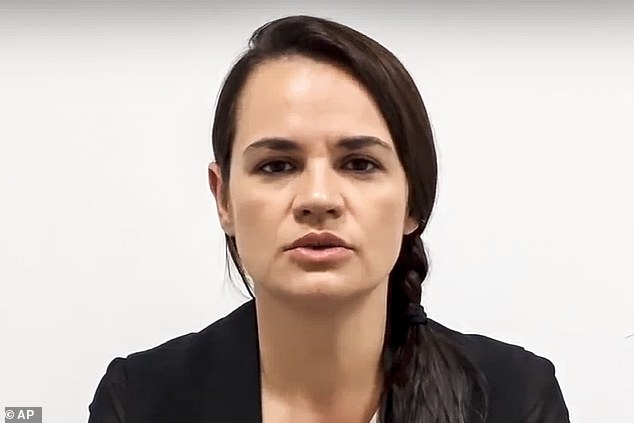 Workers at state-controlled companies have joined strikes this week, as the unprecedented mass protests enter their 11th day and erode the authority of the man once dubbed ‘Europe’s last dictator.’

It’s not entirely clear what the Europeans can do right now, but they appear determined to help maintain the momentum that began in the streets of Minsk with a show of political support, and to revive a sanctions program on Belarus that was eased four years ago as relations with Lukashenko improved.

In a video statement ahead of their virtual summit, Belarusian opposition leader Ms Tikhanouskaya called on Europe to support ‘the awakening of Belarus.’

‘I call on you not to recognise these fraudulent elections. Mr. Lukashenko has lost all the legitimacy in the eyes of our nation and the world,’ Ms Tikhanouskaya said.

On the eve of the meeting, Michel had a half-hour telephone conversation with President Vladimir Putin to share the EU’s concern about election irregularities and the scale of the security crackdown, and to impress upon the Russian leader the right of the Belarus people to determine their own future.

They discussed ways to encourage talks between Lukashenko and the opposition, possibly by supporting a dialogue process fostered by the Organization for Security and Cooperation in Europe.

Judy Dempsey, Nonresident Senior Fellow at Carnegie Europe and Editor in Chief of Strategic Europe, said the emphasis from the Europeans appears to be on getting Lukashenko to start talking to an opposition whose legitimacy he has tended to question.

‘Time is of the essence,’ she warned, if Belorussians are not to see their hopes for change hijacked.

‘The EU already said it does not recognise the outcome of the presidential election. The idea of new elections would rattle Putin, whose own record on free and fair elections has been challenged – so far unsuccessfully – by protesters in Russia,’ Dempsey said.

The relatively small EU nation of Lithuania is playing a major role as the protests unfold by giving refuge to Tsikhanouskaya. Its Baltic neighbours, Estonia and Latvia, are also deeply involved in diplomatic efforts, as is Poland.

Some in Europe are concerned that hitting Lukashenko and his associates too hard might drive Belarus into the arms of Russia, even though relations between Minsk and Moscow have been troubled in recent years and even more tense in the run up to the polls. Others fear Russian intervention.

But experts tend to play down those worries, and say the people of Belarus only want to secure independence, and are not interested in deeper relations with Russia, the European Union, or in joining Moscow’s nemesis, the NATO military alliance.

Belarus is not Georgia or Ukraine, where Putin fanned the flames of conflict by backing pro-Russian separatists.

Ekaterina Pierson-Lyzhina, a Brussels-based researcher into Belarus’ EU foreign policy, said that recent surveys suggest around 60% of people want the country to remain independent and reject any kind of union. Smaller groups are divided up into those who support European or Russian integration.

‘There are no European flags, no Russian flags. This revolution is about domestic dissatisfaction of the majority of Belarusians with their president, who has held a grip on power for 26 years,’ she said, and urged the EU to set up a fund for victims of the crackdown and help build a database on police crimes.