BBC iPlayer viewers were left baffled after an iconic children’s TV show was slapped with a disclaimer about its potentially out-of-date ‘language and attitudes’.

The warning appeared on the streaming service before episodes of Brum, the children’s show about a mischievous car with a mind of its own.

Viewers were confused by a notice warning the series ‘may reflect’ the views of the 1990s when it was first aired.

Social media users spotted the disclaimer online and have mocked the notice which the BBC said was added ‘in error’.

However the BBC has placed genuine warnings on a string of other classic programmes from yesteryear in the wake of the Black Lives Matters movement – including High Hopes, The League Of Gentlemen and The Mighty Boosh. 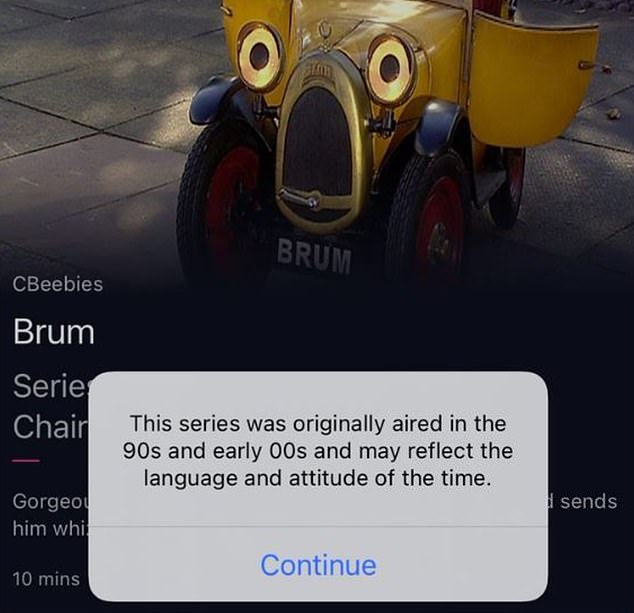 Popular children’s TV series Brum carried a warning on BBC iPlayer which said it ‘may reflect’ attitudes in the 90s and early 00s, when the show was first aired

The pop-up box which appears before watching the show said: ‘This series was originally aired in the 90s and early 00s and may reflect the language and attitude of the time.’

The BBC added warnings about ‘outdated social attitudes’ to a number of shows on its streaming service in July.

It came after a number of classic comedies, including The Mighty Boosh and The League Of Gentlemen, were removed from Netflix due to their use of blackface after the Black Lives Matter movement.

The BBC have since removed the notice from Brum after they spotted the ‘mistake’.

One Twitter user said: ‘Goodness me, what actually happened in episodes of Brum?’

Warning – viewers may find these shows offensive: Other programmes the BBC says ‘reflect attitudes of their time’

The League Of Gentlemen

A third commented a series of tweets, which said: ‘I couldn’t quite believe this, so I checked and amazingly, it is real.

‘The inevitable conclusion to this is Brum appearing on Question Time and spending all of his time ranting about the woke snowflakes in Extinction Rebellion.

‘“Stop giving Brum attention!,” we’ll cry, as he trends at the top of Twitter and thanks to most right-on twitterati losing their minds, transforms into a new pantomime villain for the Question Time -> GMB -> This Morning -> Sky News pipeline.’

The BBC have confirmed the message was an error. A spokesman said: ‘This label was added in error and has been removed from Brum on BBC iPlayer.’

Another Twitter user wrote: ‘I put this on for my son about 20 minutes ago and was amused by this notification. Turns out he is terrified of Brum, so it should have perhaps had a horror warning on it instead!’

A second added: ‘Watching Brum on iPlayer with my 1 y/o and there’s basically warning before every episode that it “originally aired during the 90s and early 00s and some of the language used in it may reflect the era”. Who’s out here trying to cancel Brum?’

Brum, which first aired in 1991, was produced by Anne Wood and narrated by Toyah Willcox.

It focused on a car who sneaks out into the town when his owner isn’t watching and goes on adventures.

The show was hugely popular and all episodes were uploaded to BBC iPlayer this month.