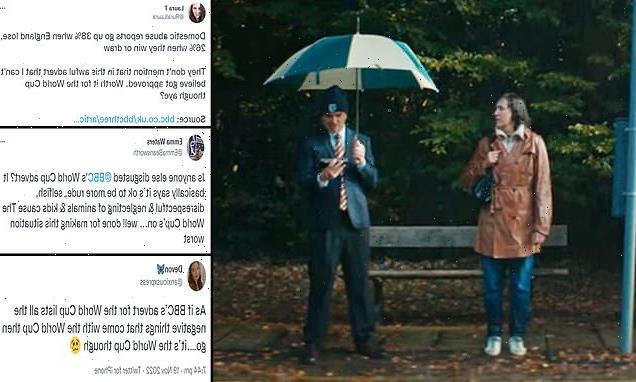 A BBC advert for the Qatar World Cup 2022 has been criticised by viewers for ‘saying it’s okay to neglect kids and animals’ because the football is on.

The broadcaster has also received backlash for a poster that appears to encourage not visiting your nan or going to your child’s nativity play because of the World Cup.

One viewer said they mistook the TV advert for a public service announcement about levels of domestic abuse rising during sports competitions and others said the positive promotion of Qatar’s event condoned homophobia.

The BBC’s coverage of the event has been conscious of the controversy surrounding hosts Qatar, though some have accused them of virtue signaling.

The graphic on the poster, which has been seen in the London Underground, looks like the results of a football match from BBC Sport at first glance.

However instead of having two team names it reads: ‘Kids’ nativities missed 1 – 2 Wales highlights watched’.

The other two ‘results’ are: ‘Work meetings attended 2 – 7 Refreshing the sport app’ and ‘Visits to nan 0 – 3 England games seen’.

Below the fake football results a slogan reads ‘It’s the World Cup, though’. 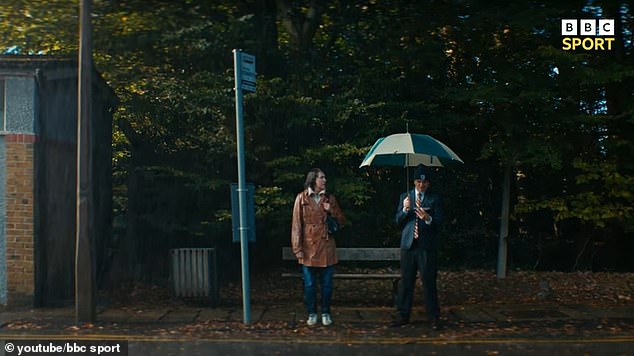 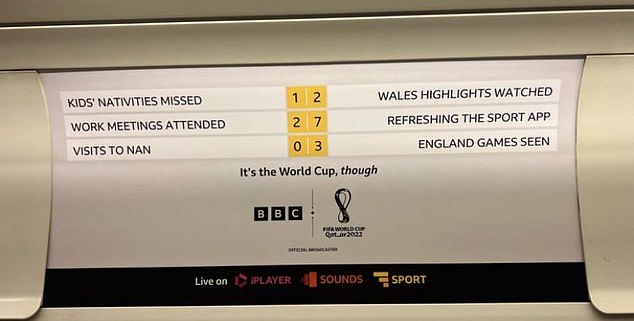 The TV advert includes a mother ignoring their child because the football is on, a man talking at a clearly bored woman about the event, a dog waiting by an empty bowl and even Santa Claus not noticing a child waiting beside him.

The response online was mixed with people arguing the advert was giving ‘an anti-football argument while advertising football’.

Responding to the poster, Reddit user Chloe said: ‘This actually hurts. I took a photo of my nan’s new address after she sent me a birthday card and kept telling myself I’d go visit soon. She died a few weeks later

‘Biggest regret of my life. Always thinks out this and it happened over 5 year ago now

Another user commented: ‘I saw the recent tv ad and I legit thought it was a PSA on domestic abuse rise during sports competitions. Incredibly bizarre.’ 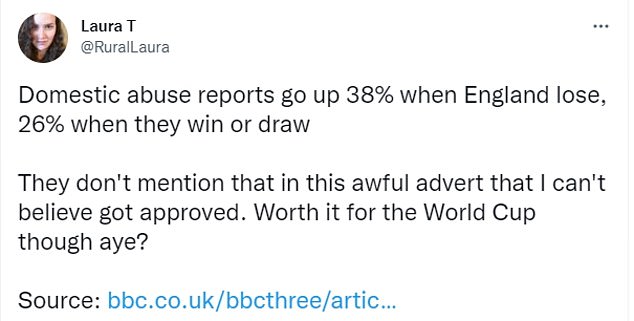 Twitter user Emma said: ‘Is anyone else disgusted at BBC’s World Cup advert? It basically says it’s ok to be more rude, selfish, disrespectful & neglecting of animals cause the World Cup’s on.’

While some people were less offended by the message and said they could see the fun side of it.

One Reddit user said: ‘I mean England finals or see your kids Christmas play, World Cup finals it is!’

Another added: ‘It’s just a bit of fun. You’re not actually bothered by this are you?’

One Wales fan said: ‘There’s a nativity play every year, wales haven’t been to the world cup in 58, they’ll understand.’

The BBC has been contacted for a statement.