‘If you keep up the insults, you may end up with first hand experience’: Barrister claims Azealia Banks’s racist outburst where she branded Irish people ‘f****** ugly’ could see her ARRESTED if she continues to make similar comments in the UK

Azealia Banks’s racist outburst against Irish people could lead to her arrest in the UK if she continues to make similar remarks, a barrister has suggested.

The 27-year-old rapper took to social media earlier this week to brand Irish people ‘f***ing ugly’ after she stormed off an aircraft scheduled to fly from London’s Gatwick Airport to Dublin, following a row with an Aer Lingus air stewardess.

A day later she then branded Irish people ‘inbred’, ‘leprechauns’ and asked if they ‘had a famine to go die in’ in a series of social media comments.

Yet the controversial 212 singer could potentially face legal repercussions if she were to repeat her remarks on British soil under the Communications Act 2003, barrister Tomas McGarvey hinted. 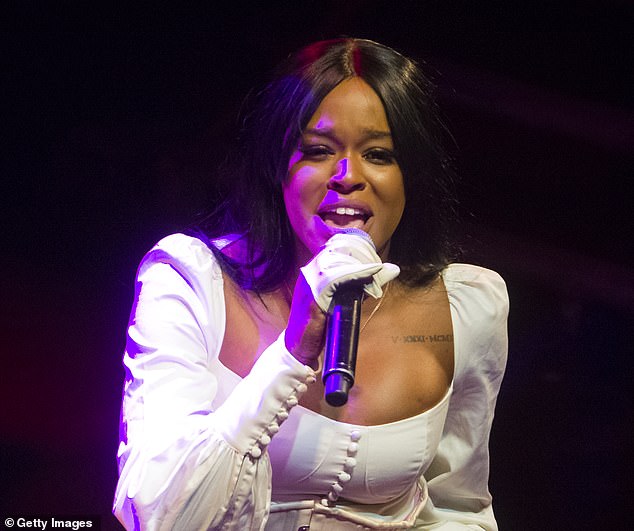 He tweeted: ‘Hi #azeliabanks in light of your recent comments on #instagram about Irish women & Irish people generally, perhaps I can introduce you to the #CommunicationsAct2003 (s127) before you land in England. If you keep up the insults, you may end up with first hand experience.’

He included a screenshot of section 127 of the Communications Act 2003, which listed a series of measures which Banks’s tweets and recent outbursts could have broken.

Section 127 covers offensive and threatening messages sent over a ‘public’ electronic communications network. Since 2010 it has increasingly been used to arrest and prosecute individuals for messages posted to sites such as Twitter and Facebook.

Earlier this week, Banks referenced the Great Famine of Ireland, from 1845-49, which saw one million Irish people die from starvation and disease, she wrote to one follower: ‘Don’t you have a famine to go die in?’

Responding to another follower in another offensive comment, she wrote: ‘Because most of you can’t talk or write lol. 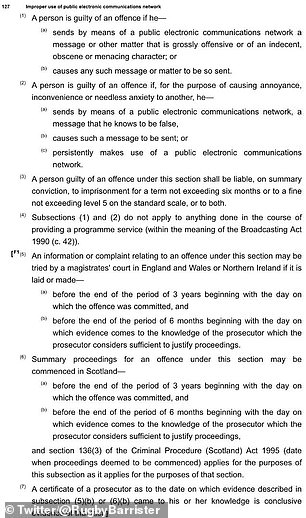 McGarvey included section 127 of the Communications Act 2003 in his tweet, which covers offensive and threatening messages sent over a ‘public’ electronic communications network

‘You lot are a bunch of prideful inbred leprechauns who have ZERO global influence and ZERO white privilege. The rest of the world’s white folk don’t want to associate with you lot at all and it’s because you are barbarians.

Continuing her rant, she wrote: ‘I’m happiest knowing the Irish are quarantined on an isle so they can continue to inbreed and keep their defective genes away from humanity.

In response to one comment saying: ‘I’m still waiting to see a pretty Irish woman’ she responded ‘LOL’.

Under section 127 of the Communications Act 2003, the law states: ‘A person is guilty of an offence if he (a) sends by means of a public electronic communications network a message or other matter that is grossly offensive or of an indecent, obscene or menacing character’.

It goes on to add: ‘A person is guilty of an offence if, for the purpose of causing annoyance, inconvenience or needless anxiety to another.;

‘A person guilty of an offence under this section shall be liable, on summary conviction, to imprisonment for a term not exceeding six months or to a fine not exceeding level 5 on the standard scale, or to both.’ 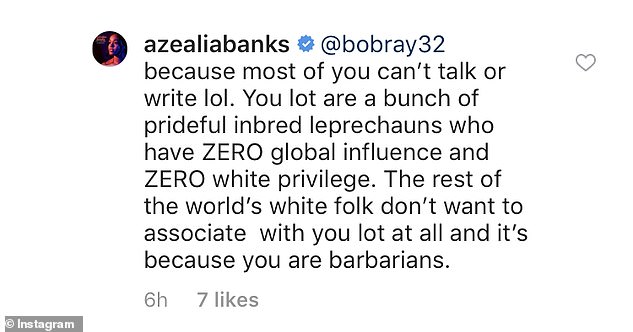 Vile: And a day after offering a proverbial olive branch by dedicating her Dublin show to ‘beautiful Irish women’ on Tuesday, the musician branded Irish people ‘inbred’, ‘leprechauns’ and mocked the potato famine in a series of social media comments