New York: Some of New York City's most famous landmarks were shielded behind barricades of plywood on election night, in extraordinary scenes that startled even seasoned New Yorkers.

The base of the Empire State Building, the sprawling Rockefeller Centre, and countless shops in Times Square and up and down Fifth Avenue were boarded up to prevent looting, while at least five dump trucks and a New York Police Department bus were parked near the entrance to Trump Tower to form a barrier. 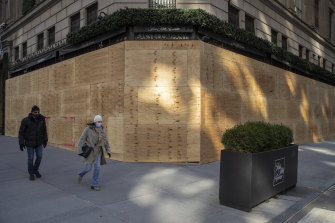 Already pummelled by an unrelenting pandemic that has killed more than 33,000 people across the state, and reeling from its economic fallout, New York was again on edge as one of the most divisive election campaigns in modern US history finally drew to a close.

The front page of the New York Daily News summed up the city's collective nervousness, with its election-day front page that declared: "United States of anxiety."

One New Yorker, Keith, watched incredulously as the Rockefeller Centre barriers went up on Wednesday (AEDT). "I've worked here for more than 20 years, through many elections, and have never seen anything like this," he said.

Across the road, barricades were placed around the Fox News headquarters, as police and security stood guard.

New York overwhelmingly voted for Democratic nominee Hillary Clinton in 2016, by almost four to one. The state was called immediately for Joe Biden as soon as polls closed on Tuesday, with early results pointing to a similarly large margin.

As election day turned into night, hundreds of police officers and private security guards flooded the city in a show of force. The NYPD insisted there were no specific threats, but they were making contingency plans to "freeze" areas of Manhattan – with no cars or pedestrians allowed – should looting occur, as happened briefly during the summer unrest following the death of George Floyd. 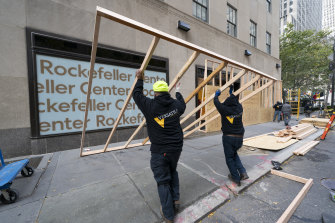 Workers erect barricades around the Rockefeller Centre in Manhattan.Credit:AP

Near Trump Tower in the early evening, small groups of Trump and Biden supporters stood on opposite sides of Fifth Avenue and screamed at each other, but as the night wore on there were no major reports of unrest.

In the final weeks of this year's presidential race, President Donald Trump had repeatedly referred to the "death" of the city he once called home.

"Look at what's happened to New York, it's a ghost town. It's a ghost town," Trump said at the final presidential debate. "For so many years I loved it, it was vibrant. It's dying, everyone is leaving New York."

With so much of the city boarded up on election night, this was a city transformed from its formerly bustling and vibrant self. But New Yorkers were defiant.

Outside an early voting centre at Madison Square Garden this week, someone had scrawled on the footpath in chalk: "This ghost town votes."