Is your bag for life, or landfill? Supermarkets boast that stronger carriers are better for the environment, but with 1.2billion sold each year they’re blamed for causing more plastic waste than ever

Dashing into the supermarket earlier this week for those last-minute Christmas essentials, all too many shoppers will have found themselves at the check-out nodding gladly when asked: ‘Would you like a plastic bag?’

Because try as we may to help the environment by taking our own bags with us when we shop, even the most green-minded consumers can be caught out from time to time.

But what has changed over recent months are the bags on offer. Where previously 5p would have bought you a flimsy single-use plastic bag, today most supermarkets have done away with that option altogether. 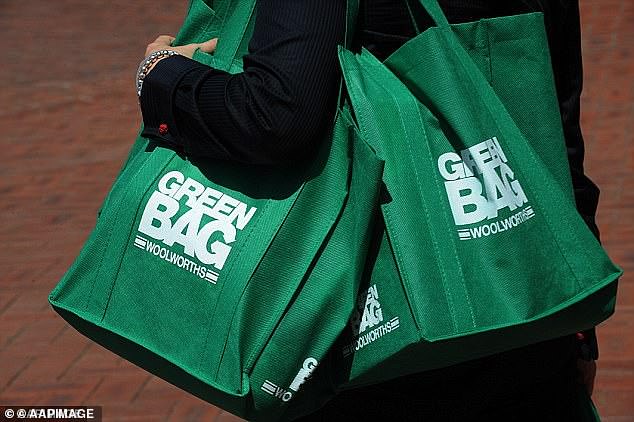 Instead, in return for 10p or so, they are handing out so-called ‘bags for life’ made of much thicker plastic. And, as the name implies, the whole point of them is that they are meant to be reused multiple times.

But what if customers treat them as single-use carriers, binning them once they have emptied them — and buying new ones on their next shopping trip? Which is exactly what worrying new figures suggest is happening.

It has emerged that last year Britain’s ten biggest retailers issued a staggering 1.18 billion bags for life, the equivalent of 44 for every household in the country.

With each of these heavy duty bags typically containing at least twice as much plastic as the flimsier versions, the concern is that the public’s fight against polluting plastic is being undermined by the switch.

According to data obtained from retailers by the Environmental Investigation Agency and published in The Times, in the 12 months to the end of June, Tesco distributed 430 million bags for life — the highest number of any supermarket. 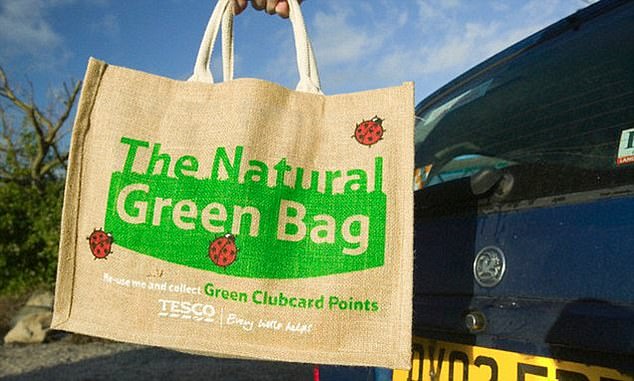 Britain’s ten biggest retailers issued a staggering 1.18 billion bags for life, the equivalent of 44 for every household in the country

Iceland announced in October that it would save more than 1,600 tonnes of plastic a year by stopping sales of single use bags and switching to bags for life. But Richard Walker, Iceland’s managing director, has said that the change had in fact increased the amount of plastic used.

‘I’m not proud of this because beyond the headline of the fact I have just removed a quarter of a billion single-use carrier bags from circulation, these bags for life are a thicker, higher grade of plastic,’ he told The Times.

‘We are selling less of them but it’s not yet enough that it’s compensated in terms of the extra weight that they are for the fewer amount of bags that we are selling. 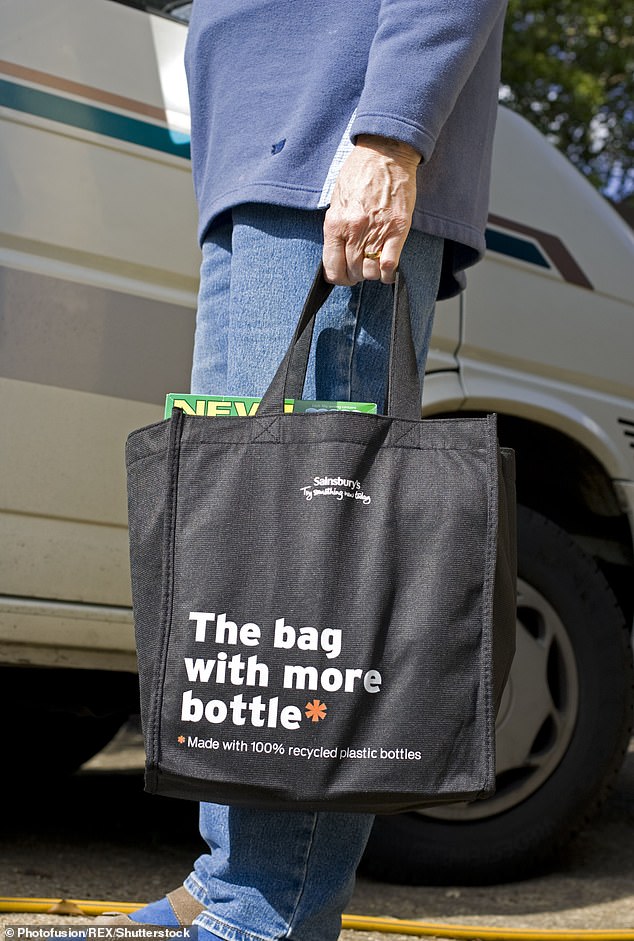 Iceland announced in October that it would save more than 1,600 tonnes of plastic a year by stopping sales of single use bags and switching to bags for life. But Richard Walker, Iceland’s managing director, has said that the change had in fact increased the amount of plastic used

‘So therefore we haven’t yet reduced the total amount of plastic weight, even though we have eliminated 5p carrier bags.’ Iceland said its 5p single-use bags weighed 10g and were made from virgin plastic, and its 10p bags for life weighed 27.5g and were recycled plastic.

Tesco also revealed that it had used more plastic in the bags for life sold up until July than in the single-use ones sold in the previous financial year. It said its bags for life contained at least 94 per cent recycled plastic.

Sainsbury’s bags for life are made from 100 per cent recycled content and are entirely recyclable. As with other retailers’ schemes, customers are encouraged to return them when they have worn out, when they will be replaced for free and the old bag recycled.

The original 5p charge for single-use bags was implemented in 2015 following The Daily Mail’s hard-fought Banish The Bags campaign. The results have been impressive. The number of single use carriers handed out every year by supermarkets has fallen from 7.5 billion to 1.2 billion since the 5p tax was introduced — a reduction of 84 per cent.

In light of this apparent success, the Government has now floated plans to extend the measures to every shop in the country and increase the charge to 10p.

This would target the 3.6 billion bags a year supplied by 250,000 smaller retailers currently exempt from the levy. But there are no plans to increase the cost of the heavy-duty bags for life — to the dismay of environmentalists. 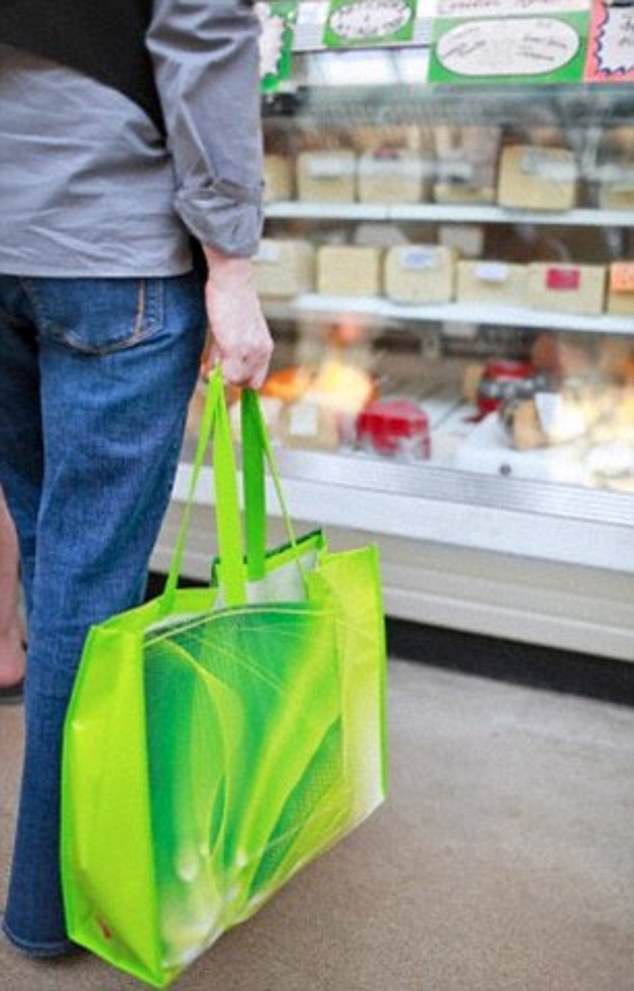 They are calling for the cost of such bags to be dramatically increased to either discourage shoppers from buying them or, if they have no choice, to use them multiple times. Forget 10p — the new price being suggested is £1. ‘A significant increase to the price of bags or ending sales of single-use bags completely should be a next step in reducing plastic bag usage,’ said Sarah Baulch, the EIA’s senior ocean campaigner.

‘In the face of a global plastic pollution crisis, supermarkets must go beyond these minimal measures and fundamentally rethink their use of single-use plastics across their supply chains.’

Rachelle Strauss, founder of the annual awareness campaign Zero Waste Week, agrees that a big price hike is required — as well as other measures.

‘I think that a 5p or 10p charge is not a big enough disincentive to stop us buying plastic bags,’ she said. ‘Ideally it would be a much bigger charge to make us really stop and consider whether we need one. People don’t think about the fact that oil spends millions of years forming underground, to then be made into a plastic bag we use for just 20 to 30 minutes.

‘The bag then spends 500 years in landfill — the numbers just don’t add up. Upping the price would be the first step, but check-out staff still ask you if you want a plastic bag even if you’ve only got one item. If shoppers had to ask for a bag themselves this would help us cut down. We need to change our psychology about plastic bags so it’s normal not to have one.’

While such measures will help us cut down, ultimately campaigners are calling for shoppers to ditch supermarket bags for good — and reuse their own ‘bags for life’. 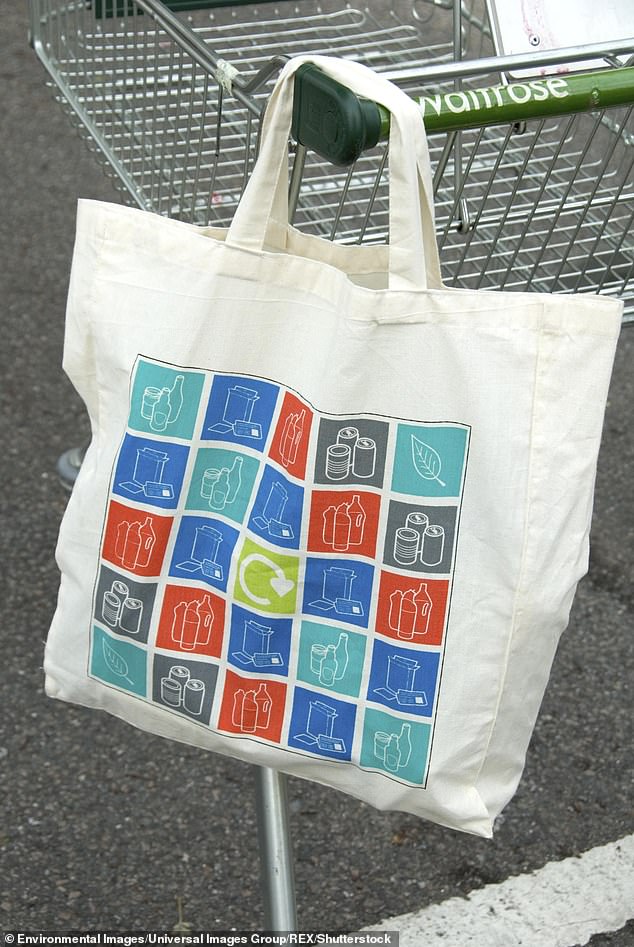 While such measures will help us cut down, ultimately campaigners are calling for shoppers to ditch supermarket bags for good — and reuse their own ‘bags for life’

‘We need to get back to the root of the issue which is to take disposable plastic bags out of circulation,’ says Strauss. ‘After all, they’ve only been around since the Seventies and we managed perfectly well before without them.’

While there are numerous alternatives on the market, because of the wide range of materials used to make them, it’s not easy for consumers to know which are the greenest ones.

For example, some studies have controversially suggested that taking into account the manufacturing process, the environmental impact of cotton bags can, in fact, be many times worse than that of plastic bags.

From the plastic polluting our oceans, to carbon footprint-heavy cotton crops, it can be hard to find a material that’s totally eco-friendly. Here we weigh up just how green the different bags for life really are . . .

The sturdy plastic bags now sold as bags for life by most UK supermarkets are generally made from low-density polyethylene (LDPE).

Stronger than the single-use bags made from high-density polyethylene they are replacing, they may contain a high percentage of recycled material and supermarkets offer recycling schemes for them.

A study of supermarket bags found an LDPE bag has to be used five times to offset the environmental impact of its manufacture compared with a conventional single-use plastic shopping bag.

But like all plastics, if disposed in landfill they will take hundreds of years to break down. More worryingly, around eight million tons of plastic are thought to enter the world’s seas every year, with a devastating impact on birds, fish and mammals. The moral: always bring your own.

Cotton bags, or canvas bags which are typically made from cotton, are the most common bags for life made from natural fibres.

Hard-wearing and durable, they are biodegradable and come from a renewable crop source. But growing cotton requires water, fertiliser and pesticides — 16 per cent of the insecticides used globally are sprayed on cotton crops.

Manufacturing cotton is also energy-intensive. Some studies have found that to match the environmental footprint of a single use plastic bag, each cotton bag would have to be used hundreds or thousands of times to compensate for its impact on the environment.

But the research has been criticised by some for over-emphasising the damage chemicals used in cotton production inflict on the ozone layer, with experts claiming that with reuse, the cotton bag soon outperforms the plastic bag on the majority of environmental impact categories.

Strong and lightweight, nylon bags for life have the added advantage of being easily compacted into a small size — often they come in a little pouch that you can squeeze them into and then pop in your pocket or handbag. This means that you can carry them around with you at all times — reducing the risk of turning up at the cashier bagless.

They are also waterproof and hard-wearing. But recycling schemes for nylon are limited and because it is a petroleum-based product, it does not biodegrade, meaning that it will also persist for hundreds of years in the environment.

Jute is a natural vegetable fibre made from the outer stem and skin of the jute plant, which reaches maturity in around six months.

It is hard-wearing, biodegradable, and is grown mainly in India and Bangladesh. Compared with cotton it uses relatively little pesticides or fertilisers and does not rely on irrigation to flourish.

Disadvantages are that the finished product is not very resistant to moisture and its grainy texture can make it hard to print on and to brand. Some jute bags come with a warning that the dye used on them may transfer on to other materials.

These voluminous, hard-wearing bags often come with sturdy loop handles — meaning they can be filled up with lots of heavy shopping. Polypropylene is a form of plastic which can be used in a variety of ways to make woven or unwoven bags, often with an insert in the bottom to improve its stability. These bags can be made using recycled materials and are easy to wipe clean.

Similar-looking bags are also created from polyethylene terephthalate (PET) — made by weaving together molten fibres from recycled plastic bottles.

With bags now being used multiple times, hygiene has become an issue. Two years ago Marks & Spencer became the first supermarket to offer reusable shopping bags with an anti-bacterial lining designed to prevent bugs from contaminating food. Because these bags are made from a form of plastic, they are neither biodegradable nor compostable.