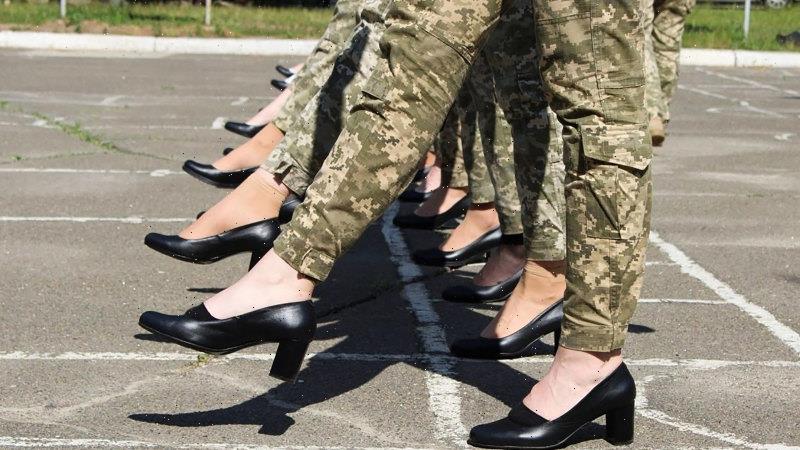 Kyiv: The official pictures aimed to display the next generation of the Ukrainian army: Dozens of female cadets marching in their fatigues and high heels, before a parade next month honouring the country’s 30th anniversary of independence.

But after a flurry of angry responses from lawmakers, a demonstration in front of the Ministry of Defence and sceptical feedback from the cadets this past week, the Ukrainian military changed its position on the footwear, acknowledging the challenges of marching in heels. 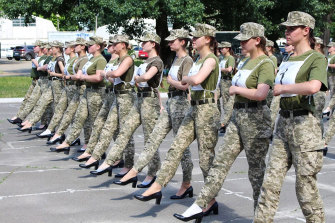 The pictures released by the Ukrainian Defence ministry of female soldiers marching in heels have attracted heavy criticism. Credit:AFP

“Walking in the heat on our roads, the military risks injury, damage to shins, ligaments and even rubbing their feet,” Inna Sovsun, an opposition lawmaker, wrote on Facebook. “Why? To bring to life someone’s stereotypes about the only role of a woman as a beautiful doll?”

The photos have prompted a widespread debate in Ukraine over the adequacy of the equipment for women in the Ukrainian army, and the broader failure of the military to better integrate women in the armed forces, despite welcomed changes in recent years.

Sovsun derided the rehearsal in heels as “harmful” and “idiotic”. 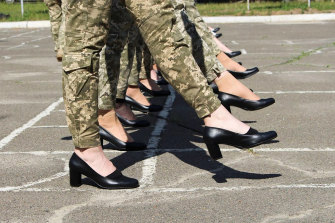 The soldiers wear heels while taking part in the the military parade rehearsal in Kyiv.Credit:AFP

The high heels are part of the female cadets’ dress uniform worn for formal occasions, but such shoes are not worn with field uniforms.

Maria Berlinska, an activist campaigning for more gender equality within the army’s ranks, said the goal of the military parade should be to demonstrate the service’s strengths, but that a soldier wearing heels would only display incapability.

“Women, like men, fight in combat boots,” Berlinska wrote on Facebook. “During the war, many of our girls died on the battlefield in military uniform.”

Women have been allowed to serve in the Ukrainian armed forces since 1993, and, in 2018, the military opened up many combat jobs to them, including gunners on armoured vehicles, snipers or infantry commanders.

Roughly 31,000 women serve in the military, more than 15 per cent of the Ukrainian armed forces, a figure that has more than doubled since 2014, according to the military, as Ukraine has waged a yearslong war against Russian-backed separatists in the eastern parts of the country.

Yet women have faced sexual assault and harassment, and researchers have shown that they face gender discrimination and remain assigned to poorly paid and low-ranking positions.

A research study by the United Nations on Ukrainian women in the military published in 2016 found that women had to wear male footwear and uniforms, or obtain an adequate one on their own, and that they were not provided with female-hygiene products.

“I have the impression that there are no women in the army,” one female respondent told the researchers in the study, “The Invisible Battalion”.

Another woman said, “Every man I met at the battalion said I should be at home and have kids.”

Anna Kvit, a Kyiv-based expert on gender equality and a co-author of the study, said women’s conditions had improved since the report’s publication. Yet, she added, women still face poor recognition, discrimination and inadequate uniforms and shoes.

The pictures showing a unit composed of only women also sent a wrong message, Kvit said, one in which women were isolated in the army and segregated from the men.

“Beyond the heels, it’s totally ridiculous, and against Ukraine’s promises to integrate women in the military sector and promote gender equality,” Kvit said.

The Ukrainian Ministry of Defence said in a Facebook post on Friday that other countries require servicewomen to wear heels and that the dress code came from an official decree from 2017.

But on Saturday, Andriy Taran, the defence minister, said during a visit with the cadets that “improved” and “ergonomic” shoes would be made available “in the shortest possible time”.

“It is simply inconvenient for female servicemen to walk in such shoes,” the Ministry of Defence said in a news release after the visit.

New photos were also released: This time, the women were wearing boots.